The Temple: Past, Present and Future 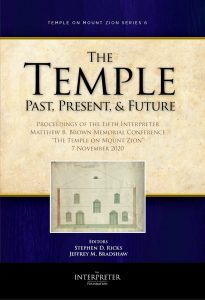 Proceedings of the Fifth Interpreter Matthew B. Brown Memorial Conference
“The Temple on Mount Zion,” November 7, 2020

Videos of the presentations at the conference are available here.

The temple is central to Latter-day Saint worship. Through modern revelation Joseph Smith restored the ancient tradition of temples and the ordinances performed therein. Studies of ancient temples can shed much light on latter-day temples and temple worship.

Several years ago Latter-day Saint scholar Matthew Brown planned a conference entitled The Temple on Mount Zion and began to invite the participants. Matthew Brown loved the temple and temple worship and studied and published on ancient and modern temples. His interests and knowledge were vast. When Matthew passed away very unexpectedly in 2011, his friends decided to organize a series of conferences in his memory. This volume, the sixth in the series, contains proceedings from the fifth conference held in his memory 7 November 2020 and reflects many of the topics that Matthew loved, centered on the theme of the temple: past, present, and future.

Chapters relating to the ancient past of the Bible and the Book of Mormon provide new insights into temple themes in Ruth, sacred names of Moses and Jesus Christ, prayer with uplifted hands, temple iconography of cherubim and seraphim, ritual purity in 3 Nephi 19, the rites of the Raqchi Temple in Peru, and sacred space in the early Christian Church. Of great significance to the present era is a chapter on women and the priesthood in the contemporary Church. And looking toward the future is a chapter on the Millennial Temple in Jackson County, Missouri in the context of its historic past.

Stephen D. Ricks is Professor of Hebrew and Cognate Learning at Brigham Young University, where he has been a member of the faculty since 1981. He has served as president and chairman of the board of the Foundation for Ancient Research and Mormon Studies and has published extensively on the ancient temple.