In God’s Image and Likeness 2:
Enoch, Noah, and the Tower of Babel 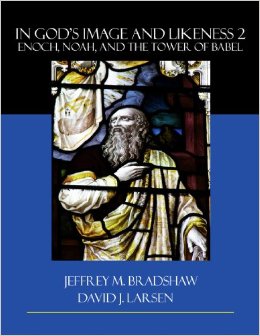 The first edition of Jeff Bradshaw and David Larsen’s book, In God’s Image and Likeness 2: Enoch, Noah, and the Tower of Babel, is now available. Published by The Interpreter Foundation and Eborn Books, the beautiful 600-page hardcover book wraps up the final chapters and stories of the Book of Moses and continues through the end of Genesis 11. You can read excerpts here, and reviews here. Order the book at FairMormon (currently discounted 15%) or on Amazon.com.

One of the most prominent themes in the first eleven chapters of the Bible is a series of transgressions of boundaries that had been set up in the beginning to separate mankind from the dwelling place of God. This general thesis is useful as far as it goes. In the stories of the transgressions of Adam and Eve, of Cain, of Lamech, of the “sons of God” who married the “daughters of men,” and of the builders of the Tower of Babel, we cannot fail to observe the common thread of a God who places strict boundaries between the human and the divine. Surprisingly, however, a significant and opposite theme has been largely neglected by readers: namely, the fact that within some of these same chapters God is also portrayed as having sought to erase the divine-human boundary for a righteous few, drawing them into His very presence. The prime examples of this motif are, of course, Enoch and Noah, of whom it was explicitly said that they “walked with God.”

This volume contains the most comprehensive commentary ever published on the beautiful and doctrinally rich chapters of the book of Moses and the Joseph Smith Translation of the Bible that relate the stories of Enoch, Noah, and the Tower of Babel. The commentary combines prophetic insights, excerpts from ancient texts, current scientific perspectives, and up-to-date biblical scholarship—all presented from a perspective of faith. Each section of the book is prefaced by an overview illuminating major themes and issues. This is followed by the text of each chapter of scripture, accompanied by a detailed phrase-by-phrase commentary designed to give the modern reader both an understanding of the plain sense of the words as well as their significance in context. Based on the first complete transcriptions of the original manuscripts of the Joseph Smith Translation, significant textual variants are identified and discussed.

Of special interest to LDS readers is the light that these chapters shed on temple worship. A detailed study of this book of scripture in conjunction with ancient and modern sources suggests striking parallels with temple themes. Insights on these topics from LDS scripture and prophets, as well as relevant extracts from the works of Hugh Nibley and other religious scholars, historians, philosophers, scientists, literary specialists, playwrights, musicians, and artists are found on nearly every page of the book. The book also features an extensive annotated bibliography on ancient and modern sources relating to the stories of Enoch and Noah, and a concordance to the pseudepigraphal Enoch literature—both prepared by Colby Townsend. An additional highlight is the collection of more than a hundred carefully chosen color or black-and-white figures, photographs, and illustrations relating to the text—themselves also the subject of detailed commentary.

The central message of the book of Moses is in its invitation to join the divine pattern whereby we may come to fully reflect God’s image and likeness. This wondrous work of scripture has been expressly written to “call [us] out of darkness into his marvelous light” (1 Peter 2:9).