The Temple: Ancient and Restored 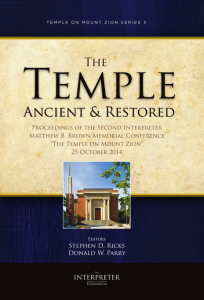 The hardcover is now available for purchasing from Amazon.com and AmazonSmile, for $24.99.

The temple is central to Latter-day Saint worship. rough modern revelation Joseph Smith restored the ancient tradition of temples and the ordinances performed therein. Studies of ancient temples can shed much light on latter-day temples and temple worship. The purpose of this book series is to increase understanding and appreciation of temple rituals and doctrines, and to encourage participation in the redeeming work of family history and temple worship.
Several years ago LDS author and researcher Matthew Brown planned a conference entitled e Temple on Mount Zion and began to invite the participants. Matthew Brown loved the temple and temple worship and studied and published on ancient and modern temples. His interests and knowledge were vast. When Matthew passed away very unexpectedly in 2011 his friends decided to organize a conference in his memory that was held in September 2012. The published volume containing the proceedings of that conference were published in 2014 as the second in the Temple on Mount Zion Series. This volume, the third in this series, contain proceedings from the second conference held in his memory on 25 October 2014 and reflect many of the topics that Matthew loved.
The chapters explore what Joseph Smith knew about modern temple ordinances by 1836, the importance of an aesthetic in Israelite ritual, the coronation motif of Isaiah 60–62, how Moses 1–7 seems adapted to the physical features of the temple of Solomon, implications of temple ritual in the Egyptian Book of the Dead for the Book of Abraham, how Psalm 24 reveals two YHWHs at the gate of the Jerusalem Temple, Jacob 5 as a temple text, the temple program of Leviticus, how the gospel of John reveals the way of the temple in the life of Jesus, the Day of Atonement in Christian and Nephite scripture and practice, and the cosmic mountain in Islamic tradition.