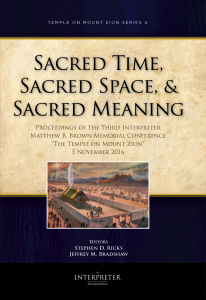 Proceedings of the Third Interpreter Matthew B. Brown Memorial Conference
“The Temple on Mount Zion,” 5 November 2016

The hardcover is now available for purchase from Amazon.com and AmazonSmile, for $24.95.

The temple is central to Latter-day Saint worship. Through modern revelation Joseph Smith restored the ancient tradition of temples and the ordinances performed therein. Studies of ancient temples can shed much light on latter-day temples and temple worship. Several years ago Latter-day Saint scholar Matthew Brown planned a conference entitled The Temple on Mount Zion and began to invite the participants. Matthew Brown loved the temple and temple worship and studied and published on ancient and modern temples. His interests and knowledge were vast. When Matthew passed away very unexpectedly in 2011, his friends decided to organize a series of conferences in his memory. This volume, the fourth in the series, contains proceedings from the third conference held in his memory 5 November 2016 and reflects many of the topics that Matthew loved, centered on the theme of sacred time, sacred space, and sacred meaning.

The first chapter, by Matthew L. Bowen (associate professor fo Religious Education at BYU-Hawaii), explores the Israelite Tabernacle (literally “tent of meeting”) and its scriptural role in preparing individuals to “meet” the Lord at the veil after death, in the resurrection, and at Christ’s Second Coming. The second chapter, by Jeffrey M. Bradshaw and Matthew L. Bowen discusses the symbolism of water, spirit, and blood as they are used in scripture and in the ordinances. David Calabro (Curator of Eastern Christian and Islamic Manuscripts at the Hill Museum and Manuscript Library, Saint John’s University) illuminates the function of the Book of Abraham as a ritual narrative, outlining how words and artwork come together to create a compelling temple text. Camille Fronk Olson (recently retired Chair of the BYU Department of Ancient Scripture) highlights thesignificant ways that women influenced and shaped ancient Israelite worship, including song and dance as a means of proclaiming revelatory truths.

Stephen D. Ricks is Professor of Hebrew and Cognate Learning at Brigham Young University, where he has been a member of the faculty since 1981. He has served as president and chairman of the board of the Foundation for Ancient Research and Mormon Studies.