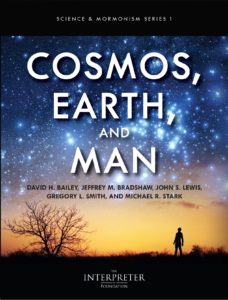 The hardcover is now available for purchasing from Amazon.com and AmazonSmile, for $59.95.

Science and Mormonism have nearly always been on very friendly terms, with Church members sharing the deep conviction that, as expressed by former scientist and apostle Elder James E. Talmage, “within the gospel of Jesus Christ there is room and place for every truth thus far learned by man, or yet to be made known.” Subsequent Presidents and General Authorities of the Church have advanced similar views about the ultimate compatibility of religious and scientific truths and, with notably few exceptions, have maintained markedly positive attitudes toward both the methods and conclusions of mainstream science and the advance of modern technology.

The First Interpreter Science and Mormonism Symposium was held on 9 November 2013 with a focus on the topics of Cosmos, Earth, and Man. In this volume of expanded proceedings from this event, readers will enjoy concise and colorful summaries of the state-of-the-art in research relating to these topics and will gain a deeper appreciation of the unique contributions of LDS doctrine to the ongoing conversation.