The Interpreter Foundation is a nonprofit educational organization focused on the scriptures of The Church of Jesus Christ of Latter-day Saints (the Book of Mormon, the Pearl of Great Price, the Bible, and the Doctrine and Covenants), early Latter-day Saint history, and related subjects.

Read Interpreter: A Journal of Latter-day Saint Faith and Scholarship online and gain new insights into the scriptures from our talented staff of writers. 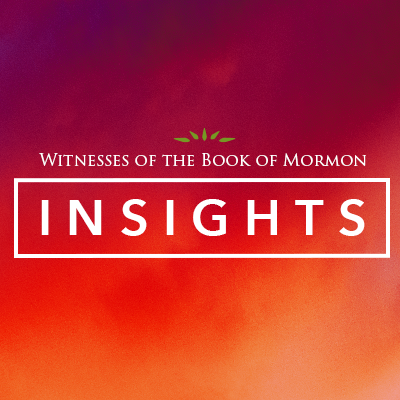 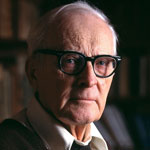 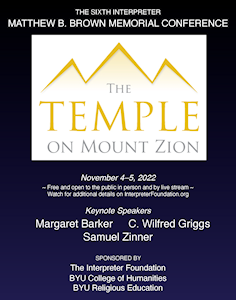 Vidoes of the conference talks are now available at
https://interpreterfoundation.org/conferences/2022-temple-on-mount-zion-conference/ 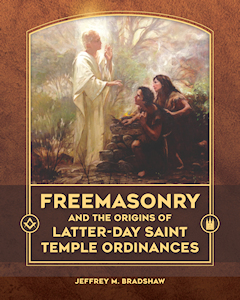 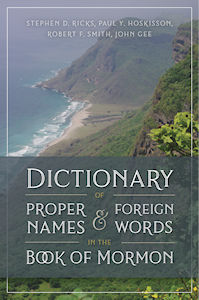 Freemasonry and the Origins of Latter-day Saint Temple Ordinances

Published by The Interpreter Foundation in cooperation with Eborn Books

Go to https://interpreterfoundation.org/books/ for more information 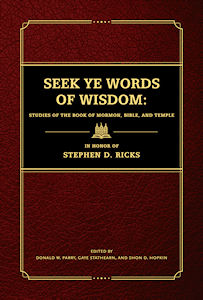 Studies of the Book of Mormon, Bible, and Temple in Honor of Stephen D. Ricks

Jointly published by The Interpreter Foundation and BYU Religious Education

Go to https://interpreterfoundation.org/books/ for more information

The Words of Gad the Seer: An Apparently Ancient Text With Intriguing Origins and Content

END_OF_DOCUMENT_TOKEN_TO_BE_REPLACED

Videos of the Tenth-Birthday Party for the Interpreter Foundation

On Saturday, 17 September 2022, we held a special tenth-birthday party for the Interpreter Foundation at the Riverside Country Club in Provo. Invited guests included Foundation volunteers and major donors. Unfortunately, limitations of space and budget precluded us...

END_OF_DOCUMENT_TOKEN_TO_BE_REPLACED 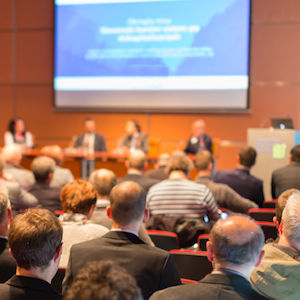 Almost all conceptions of human agency are rooted in libertarianism and grounded in a set of assumptions about the nature of the non-human world, the nature of causality, and the nature of determinism. The effect of this is that agency is always understood around two mutually exclusive positions, compatibilism and incompatibilism. Within this intellectual context, human agency is always impossible, trivial, or illusory. Human agency is drawn into discussions of science and religion because most traditional “scientific” notions of causality and determination are understood in ways that make agency impossible, and most religious positions try to reconcile themselves to the classical libertarian position, which is self-contradictory. The presentation proposed here argues for a new understanding of human agency which requires a rethinking of causality and determinism that is compatible with science. And a refutation of agency that most religious positions unwisely endorse. Agency turns out to be not so much a matter of free choice, but of a deeper matter of the nature of the human world, human ontology, and truth. The lack of clarity on issues of science, religion, and agency comes not from science or religion, but from a faulty dogmatic scientism and the naturalistic metaphysic it always imposes on intellectual discourse.

END_OF_DOCUMENT_TOKEN_TO_BE_REPLACED

Nibley Lectures: Time Vindicates the Prophets — The Book of Mormon as a Witness

This lecture is a radio talk on the Book of Mormon as a witness of continuing revelation and God’s dealings with mankind.

END_OF_DOCUMENT_TOKEN_TO_BE_REPLACED

This is an Interpreter Radio Roundtable for Come, Follow Me Old Testament Lesson 51, “I Have Loved You, Saith the Lord” on Malachi. The panelists for this roundtable were Neal Rappleye, Jasmin Rappleye, Stephen O. Smoot, and Hales Swift. This roundtable was extracted...

END_OF_DOCUMENT_TOKEN_TO_BE_REPLACED

Malachi 1 Introduction/The Burden of the Word Our last book and prophet of the Old Testament is also the last chronologically. Malachi, whose name means “my messenger,” ministered in about 430-420 BC, likely in and around Jerusalem. For only the third time in the Old...

END_OF_DOCUMENT_TOKEN_TO_BE_REPLACED

This post is a summary of the article ““Being of that Lineage”: Generational Curses and Inheritance in the Book of Abraham” by John S. Thompson in Volume 54 of Interpreter: A Journal of Latter-day Saint Faith and Scholarship. An introduction to the Interpreting...

END_OF_DOCUMENT_TOKEN_TO_BE_REPLACED

“Being of that Lineage”: Generational Curses and Inheritance in the Book of Abraham

Abstract: The seeming appearance of a lineal or generational curse in the Book of Abraham has been used erroneously to marginalize people and justify racist ideas in Latter-day Saint history. To avoid any further misinterpretation of scripture in ways that are...

END_OF_DOCUMENT_TOKEN_TO_BE_REPLACED

In this episode, our hosts Bruce Webster, Kris Frederickson and Martin Tanner introduce our new show format. Each show will be divided into a number of segments that may vary from week to week. One segment will provide information that will supplement the study...

END_OF_DOCUMENT_TOKEN_TO_BE_REPLACED

Conference Talks: Science vs. Religion: Can This Marriage Be Saved?

This essay examines the details of ongoing wars between science and religion and shows why they are not only futile and senseless, but also unnecessary. Sometimes such battles cause people to forget important ideals that science and religion hold in common. It is important for religious movements to stay focused on religion and not embrace in their central belief systems some particular scientific theory or worldview that will eventually become obsolete with continued research advances. As Holmes Rolston observed, “The religion that is married to science today will be a widow tomorrow.” Both scientists and religious believers can stand in awe at the majesty of the universe. So why all the fighting?

END_OF_DOCUMENT_TOKEN_TO_BE_REPLACED

Haggai 1 “Consider Your Ways” Haggai was a prophet in Jerusalem about 520 BC, after a number of those of Judah, along with their descendants who were born abroad, had returned from captivity in Babylon. Haggai’s name means “feast” or “celebration.” He was contemporary...

END_OF_DOCUMENT_TOKEN_TO_BE_REPLACED

Donate to the cause

The Interpreter Foundation is a nonprofit organization. All journal publications and video presentations are available for free by digital download and streaming. The price of hard copy versions of journal articles covers only the cost of printing; books are typically priced to help cover both upfront pre-publication expenses and royalties to authors when applicable. In some cases, the Foundation may subsidize publication costs to keep retail prices affordable. The Foundation does not profit from sales of its publications.