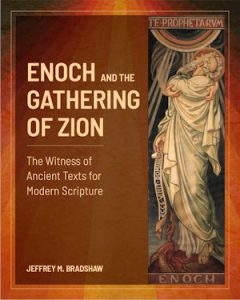 Reviews of Enoch and the Gathering of Zion

Preprint of Enoch and the Gathering of Zion (PDF)

Latter-day Saints have long been fascinated and inspired by the Book of Moses story of Enoch. Within its two lengthy chapters is the closest thing to a full biography we have in the Book of Moses. And what a biography! Moses 6–7 detail his call, his teaching mission, his glorious vision, his miraculous victories in battle, and the ultimate ascent of the city of Zion to the bosom of God. But did you know that Latter-day Saint scholars, beginning with Hugh Nibley, have begun to find pieces of what often seem to be new and authentic elements of Enoch’s story in fragments of ancient documents that have turned up with astonishing frequency over the last several decades?

With the help of the Book of Giants and other ancient texts, we are now in a better position than ever before to assemble the most complete, authentic, and detailed biography of Enoch to appear in modern times. In our day, when humble heroes and visionaries are often scorned and mocked, we need to understand the story of Enoch more than ever. After all, we are to be, like Enoch’s people, fully engaged in making the scriptural vision of Zion a reality.

The book is available in digital or physical form, in color or black and white, with scores of beautiful images.