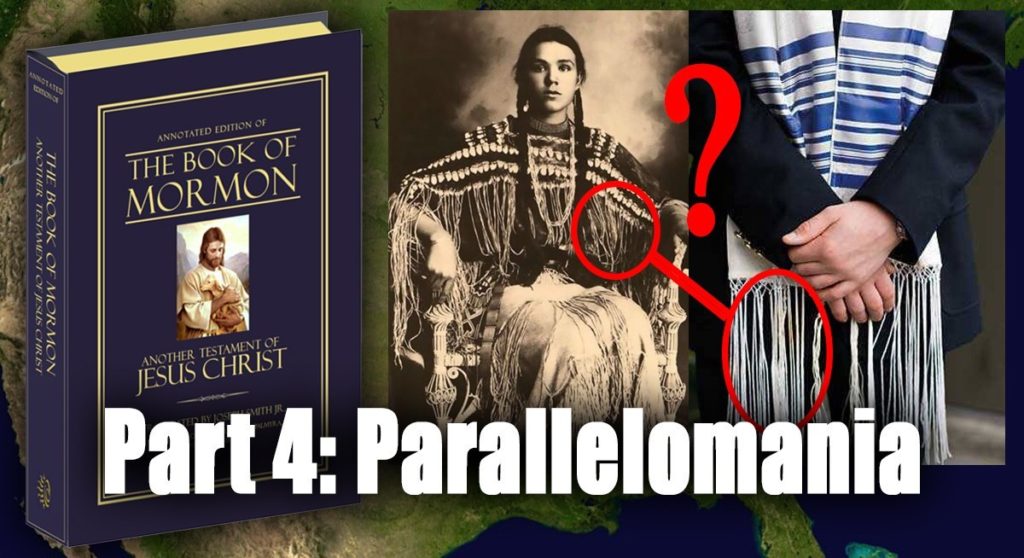 At its most basic definition, “parallelomania refers to a phenomenon (mania) where authors perceive apparent similarities and construct parallels and analogies allegedly without historical basis.”[1] In literary criticism, including biblical criticism, parallelomania has been described as “that extravagance among scholars which first overdoes the supposed similarity in passages and then proceeds to describe source and derivation as if implying literary connection flowing in an inevitable or predetermined direction.”[2] The Annotated Edition of the Book of Mormon (AEBOM) engages in parallelomania throughout its pages. It attempts to draw comparisons between North American indigenous peoples (including their dress, writing, and cultural practices) and Jews to prove the Heartland theory. These comparisons and parallels, however, are largely illusory, or lack any justifiable historical basis. Examples of parallelomania in the AEBOM include:

Many more examples of parallelomania could be cited and discussed (e.g. 120, 142, 152, 450, 540). The point here should be sufficiently clear: the AEBOM is riddled with spurious “parallels” that do not pass even the slightest scrutiny.

[1] See “Parallelomania” online at Wikipedia.
[2] Samuel Sandmel, “Parallelomania,” Journal of Biblical Literature 81, no. 1 (Mar., 1962): 1.
[3] For more on the Anthon Transcript, see Stanley B. Kimball, “The Anthon Transcript: People, Primary Sources, and Problems,” BYU Studies 10, no. 3 (1970): 325–352; FARMS Staff, “Martin Harris’s Visit with Charles Anthon: Collected Documents on the Anthon Transcript and ‘Shorthand Egyptian’,” FARMS Preliminary Report (1990); Michael Hubbard MacKay, Gerrit J. Dirkmaat, and Robin Scott Jensen, “The ‘Caractors’ Document: New Light on an Early Transcription of the Book of Mormon Characters,” Mormon Historical Studies 14, no. 1 (2013): 131–152.
[4] Sarah Rivett, Unscripted America: Indigenous Languages and the Origins of a Literary Nation (New York, N.Y.: Oxford University Press, 2017), 55–58, 74–88, 201–206. Le Clercq was evidently “inventing or adapting” his system partly off of pre-existing Mi’kmaq pictographs, since at least two glyphs pre-dating Le Clercq have been identified, but they appear not to have been alphabetic signs but rather mnemonic ideograms, and in any case, they date to no earlier than AD 1500. Rivett, Unscripted America, 77–78.
[5] The sixth character down on the left-hand side of Figure 2 on p. 91 that Hocking and Meldrum claim comes from the Anthon Transcript in fact has no corresponding character on the Anthon Transcript.
[6] On which, see Ann McGrath, Illicit Love: Interracial Sex and Marriage in the United States and Australia (Lincoln: University of Nebraska Press, 2015). In fact, one of the very Cherokees the AEBOM draws attention to, John Ross (446), himself had a white wife, Mary Brian Stapler.
[7] See Mark Alan Wright and Kerry Hull, “Ethnohistorical Sources and the Death of Abinadi,” in Abinadi: He Came Among Them in Disguise, ed. Shon D. Hopkin (Provo and Salt Lake City, UT: Religious Studies Center at BYU and Deseret Book, 2017), 209–230.
[8] Wright and Hull, “Ethnohistorical Sources and the Death of Abinadi,” 218–223.
[9] In fact, although the AEBOM cites Elijah Haines, The American Indian (Uh-Nish-In-Na-Ba): The Whole Subject Complete in One Volume (Chicago, Ill.: The Mas-Sin-Na-Gan Company, 1888), 100 for the chart, Haines himself reproduced the chart from Ethan Smith, View of the Hebrews, 2nd ed. (Poultney, VT: Smith and Shute, 1825), 90, who in turn was citing “Doct. [Elias] Boudinot [1802–1839], [James] Adair [c.1709–1783], and others.” Needless to say, the citation of a chain of two-hundred-year-old references who uncritically relied on others for their information inspires little confidence. It is also ironic that the AEBOM (unwittingly) cites View of the Hebrews, a favorite candidate for Joseph Smith’s alleged plagiarism among anti-Mormons.
[10] “While it is almost if not quite certain that the Name was originally pronounced ‘Yahweh,’ this pronunciation was not indicated when the Masoretes added vowel sounds to the consonantal Hebrew text. To the four consonants YHWH of the Name, which had come to be regarded as too sacred to be pronounced, they attached vowel signs indicating that in its place should be read the Hebrew word Adonai meaning ‘Lord’ (or Elohim meaning ‘God’). . . . The form ‘Jehovah’ is of late medieval origin; it is a combination of the consonants of the Divine Name and the vowels attached to it by the Masoretes but belonging to an entirely different word. Although . . . ‘Jehovah’ [is used] to render the Tetragrammaton (the sound of Y being represented by J and the sound of W by V, as in Latin) . . . the word ‘Jehovah’ does not accurately represent any form of the Name ever used in Hebrew.” Bruce M. Metzger, “To the Reader,” in The New Oxford Annotated Bible, ed. Michael D. Coogan, 5th ed. (New York, N.Y.: Oxford University Press, 2018), xvii.
[11] See Josef Tropper, “Der Gottesname Yahwa,” Vetus Testamentum 51, no. 1 (January 2001): 81–106. See further the comments by Dana M. Pike, “Biblical Hebrew Words You Already Know and Why They Are Important,” Religious Educator 7, no. 3 (2006): 106–109, quote at 107: “The consonants in the name ‘Jehovah’ are transliterated from the four Hebrew letters of the divine name yhwh (again, the Hebrew ‘y’ is represented in English as ‘j’). And the vowels in ‘Jehovah’ are derived from the vowels in the substitute title ‘ădōnāy, with a slight variation in the first vowel. Thus, the name Jehovah, which is very familiar to us, is a hybrid form that was written as early as he twelfth or thirteenth century, but is not well attested in English until the early sixteenth century. It was never actually pronounced ‘Jehovah’ in antiquity. Based on evidence such as the shortened forms of yhwh that appear in Israelite personal names and in the Hebrew Bible (for example, Yah/JAH in Psalm 68:4, and the last portion of the expression halĕlû-yāh, discussed above), scholars postulate that the divine name was originally pronounced ‘Yahweh’ or something similar.”
[12] Pike, “Biblical Hebrew Words You Already Know and Why They Are Important,” 107.