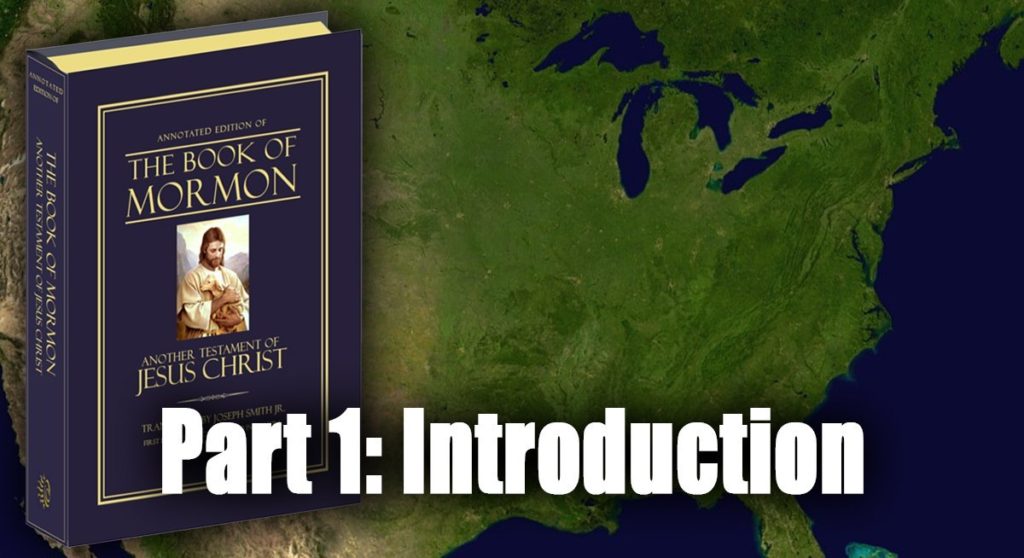 Readers of this blog know that I have not made my disapproval of the so-called Heartland theory for Book of Mormon geography a secret. I have blogged about the failings of the Heartland theory on multiple occasions (see for instance here, here, and here). Last year the FIRM Foundation and Digital Legends Publishing released the Annotated Edition of the Book of Mormon (AEBOM). The AEBOM is, from what I have heard, selling well. It appears to be popular among Latter-day Saints. It is also apparent that a lot of time and effort went into its production.

While the AEBOM may be popular, it is also deeply and fundamentally problematic.

What follows is a series reviewing the AEBOM. This review was originally conceived as an article for the journal Interpreter: A Journal of Latter-day Saint Faith and Scholarship. Over time, however, my co-authors (Matthew Roper, Neal Rappleye, and Jasmin Gimenez Rappleye) and I decided it would work better as a series instead of a single review. I was (and am) happy to host the series on my blog (https://www.plonialmonimormon.com).

This series will consist of the following:

As each portion gets posted (two a day, morning and afternoon, from June 1–7, 2019), I will be sure to include hyperlinks to the previous posts so that readers can hop in and out of any part of the review that strikes their interest.

With all of that said, I now present a critical review of the Annotated Edition of the Book of Mormon. Let me again thank my friends and colleagues Matt, Neal, and Jasmin for their help in this project.

The book was written by many ancient prophets by the spirit of prophecy and revelation. Their words, written on gold plates, were quoted and abridged by a prophet-historian named Mormon. The record gives an account of two great civilizations. One came from Jerusalem in 600 B.C. and afterward separated into two nations, known as the Nephites and the Lamanites. The other came much earlier when the Lord confounded the tongues at the Tower of Babel. This group is known as the Jaredites. After thousands of years, all were destroyed except the Lamanites, and they are among the ancestors of the American Indians.

Beyond this, no particular geography model for Book of Mormon events has received an official endorsement from the Church. Such has not stopped Church leaders and members from freely discussing where they believe the events described in the Book of Mormon took place. Nor has it stopped them from mustering arguments for, variously, a hemispheric, Great Lakes, Central American, South American, or continental United States (“heartland”) setting for the Book of Mormon.[2] While John Sorenson’s Mesoamerican model remains the favored theory for most credentialed scholars writing on Book of Mormon historicity and geography,[3] several independent researchers associated with the so-called Heartland movement have put forth arguments attempting to establish a geography of the Book of Mormon in the continental United States.[4]

The leading proponent of the Heartland model is Rod Meldrum of the FIRM Foundation (Foundation for Indigenous Research and Mormonism). Meldrum’s latest attempt to situate the events of the Book of Mormon in the “heartland” of the United States has been undertaken with David R. Hocking, a microbiologist and publisher, in the form of the recently released Annotated Edition of the Book of Mormon (AEBOM).[5] According to one description, “The Annotated Book of Mormon has been created to help readers understand the everlasting gospel as explained in the text, together with what the modern prophets and apostles have taught about it.” What’s more, the AEBOM attempts to act as a “text book [sic] for those that want more in-depth understanding of the people, places and events that shape the narrative.”

The AEBOM includes “illustrations, images, maps and prophetic statements that support the proposition that the ancestors of the ‘Indians that now inhabit this country’ [supposedly the United States] closely fits the time frames and events described in the Book of Mormon. As such, their identity is an additional witness of the divine authenticity of the text.” Thus, the self-proclaimed purpose of the AEBOM is to vindicate the Heartland theory and thereby establish the historicity and divinity of the Book of Mormon.

Astonishingly, the editors of the AEBOM deny any intention to “establish a specific geography” for the Book of Mormon (x). However, pages of annotations, images, maps, and commentary make this claim impossible to believe. It is plainly obvious that the ultimate goal of the AEBOM is to demonstrate the Book of Mormon is a pre-Columbian record of North America’s “heartland.”

While the editors of the AEBOM may be sincere in their desire to vindicate the Book of Mormon, the book, unfortunately, suffers from numerous inaccuracies, embellishments, fallacies, dubious and unsubstantiated claims, selective use of evidence, parallelomania, presentism, false claims, and pseudo-scientific and pseudo-scholarly claims.[6] These substantive problems with the AEBOM fundamentally compromise any usefulness it might have as a serious, reliable, or credible aid for studying the Book of Mormon. Readers should be aware that a substantial number of the claims made in the AEBOM are questionable at best and outright false at worst. They should, accordingly, not put uncritical trust in the AEBOM, and should in fact be suspicious of the majority of its claims.

The categories we have formulated for the kinds of problems we have identified in the AEBOM include: forgeries, unprovenanced artifacts, and pseudo-archaeology; misrepresentations of historical sources; parallelomania; unsubstantiated claims and arguments; the abuse of DNA science; and miscellaneous errors. The remainder of this review will provide a non-exhaustive analysis of some of the more egregious examples of each category to sufficiently demonstrate our contention that the claims made in the AEBOM should be met first and foremost with skepticism.

In a word, the Annotated Edition of the Book of Mormon is bad. Really bad.

[1] See “Book of Mormon Geography,” Gospel Topics; see also John E. Clark, “Book of Mormon Geography,” in Encyclopedia of Mormonism, ed. Daniel H. Ludlow (New York, NY: Macmillan, 1992), 1:176: “Church leadership officially and consistently distances itself from issues regarding Book of Mormon geography.”
[2] For various models, see John L. Sorenson, The Geography of Book of Mormon Events: A Source Book, rev. ed. (Provo, UT: FARMS, 1992).
[3] See John L. Sorenson, An Ancient American Setting for the Book of Mormon (Salt Lake City and Provo, UT: Deseret Book and FARMS, 1985); Mormon’s Codex: An Ancient American Book (Salt Lake City and Provo, UT: Deseret Book and the Neal A. Maxwell Institute for Religious Scholarship, 2013).
[4] Michael De Groote, “The fight over Book of Mormon geography,” Deseret News, May 27, 2010.
[5] Citations of the AEBOM shall henceforth appear in the body of the review.
[6] Some of the language and structure of this review has been drawn from the “Executive Summary of the Annotated Edition of the Book of Mormon,” online at Book of Mormon Central. The authors involved with this current review series were the principle authors of Book of Mormon Central’s executive summary of the AEBOM.