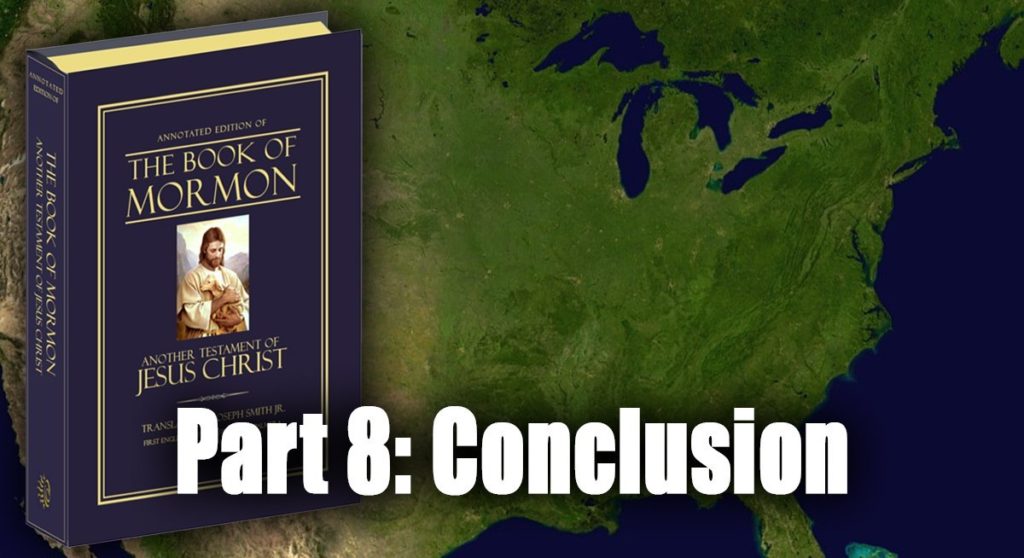 As this review demonstrates, the Annotated Edition of the Book of Mormon (AEBOM) is riddled with misinformation, misrepresentation, special pleading, and a host of additional dubious and erroneous claims. These many problems are not simply innocuous mistakes. They represent an egregious disregard for the even the most basic standards of scholarship. Beyond this, the errors, fallacies, and misrepresentations in the AEBOM are dangerous because they are very likely to mislead readers on numerous important topics, including North American archaeology and anthropology, Latter-day Saint history, sound methods of scriptural exegesis, and genetic science. By selectively giving only certain (and often badly misrepresented) strands of data, the AEBOM wishes to leave readers with the impression that there is overwhelming evidence for the Book of Mormon in North America’s “heartland,” including archaeological and genetic evidence, and that Latter-day Saint prophets have given their collective endorsement or support to specific Heartlander claims (e.g. that the United States alone qualifies as the land of promise, that we know by revelation the location of the Hill Cumorah in New York or the city of Zarahemla in Iowa, and that specific groups of indigenous peoples in the United States are Lamanites).

Such, however, is emphatically not the case. The AEBOM has in fact failed to provide the archaeological or anthropological evidence needed to justify its many assertions about North American pre-Columbian history as it pertains to the Book of Mormon. It has likewise distorted the teachings of past Latter-day Saint prophets and other influential writers about the Book of Mormon, its geography, and its covenant blessings extended to the remnant of Lehi’s seed and latter-day Gentiles on the land of promise. The AEBOM thus gives misleading and, at times, flatly false impressions about the historicity and prophetic nature of the Book of Mormon. Many of its readers will undoubtedly walk away with the impression that archaeology has somehow “proven” that Book of Mormon events can be located in specific areas of North America, and that Book of Mormon peoples can be safely identified as the Hopewell and other North American indigenous groups by either science or revelation or both.

Given today’s easy access to information about the topics discussed in the AEBOM (e.g. the genetic history of North American indigenous peoples and the archaeology of the American Northeast and Midwest), it would be very easy for readers to quickly discover they have been badly misled in trusting the book’s claims. This, consequently, might easily generate disillusionment in those who put their confidence in these bad arguments made on behalf of the Book of Mormon or who otherwise fail to properly calibrate their expectations of what archaeology and other scholarly disciplines can and cannot tell us about the historicity of the Book of Mormon. Before the editors of the AEBOM hurl charges of hyperbole, it should be pointed out that Latter-day Saint history has seen real, tragic cases of just this sort of thing happening.[1]

This is, in part, why Elder M. Russell Ballard of the Quorum of the Twelve Apostles recently urged Church members “not to pass along faith-promoting or unsubstantiated rumors or outdated understands and explanations of our doctrine and practices from the past. It is always wise,” he continued, “to consult the works of recognized, thoughtful, and faithful [Latter-day Saint] scholars to ensure you do not teach things that are untrue, out of date, or odd or quirky.”[2] An staggering number of the claims made in the AEBOM are untrue, out of date, or odd and quirky, and thus dangerous to the faith of Latter-day Saints. This is not merely a problem of conflicting interpretations of Book of Mormon geography, but rather a case of the AEBOM making many demonstrably erroneous or otherwise spurious claims.

Being, as it is, a witness for the divinity of Jesus Christ and a sign of the prophethood of Joseph Smith, it is fundamentally important that Latter-day Saint expounders or commentators on the Book of Mormon use the utmost care in how they analyze the book with academic or scholarly tools. They must be responsible not to encourage the use of problematic methodologies or to promote unsound (or outright fraudulent) “faith-promoting” arguments. When shortcomings or problems in their methods or arguments are reasonably demonstrated, it is the responsibility of said expounders to honestly recognize their mistakes, disown or refine the problematic elements, and move forward. Sadly, those involved in the production and sale of the AEBOM such as Rod Meldrum have shown no such responsibility when confronted with their errors, but have, instead, doubled down and obstinately refused to acknowledge the glaring problems and weaknesses with their arguments.[3]

The Book of Mormon deserves much better than the treatment it is given by Hocking and Meldrum. Latter-day Saints and other interested readers also deserve better in their study of this sacred text. I must, therefore, urge them to look elsewhere besides the Annotated Edition of the Book of Mormon for a reliable guided tour through the Nephite record.[4]

[1] See Stan Larson, Quest for the Gold Plates: Thomas Stuart Ferguson’s Archaeological Search for the Book of Mormon (Salt Lake City, UT: Smith Research Associates, 1996); J. Michael Hunter, “The Kinderhook Plates, the Tucson Artifacts, and Mormon Archaeological Zeal,” Journal of Mormon History 31, no. 1 (Spring 2005): 31-70.
[2] M. Russell Ballard, “By Study and By Faith,” Ensign, December 2016, 27.
[3] See “Reviews of DNA Evidence for Book of Mormon Geography” online at FairMormon; Gregory L. Smith, “Often in Error, Seldom in Doubt: Rod Meldrum and Book of Mormon DNA,” FARMS Review 22, no. 1 (2010): 17–161; Ugo A. Perego, “The Book of Mormon and the Origin of Native Americans from a Maternally Inherited DNA Standpoint,” in No Weapon Shall Prosper: New Light on Sensitive Issues, ed. Robert L. Millet (Provo, UT: Religious Studies Center, Brigham Young University, 2011), 171–217; Matthew Roper, “Losing the Remnant: The New Exclusivist ‘Movement’ and the Book of Mormon,” FARMS Review 22, no. 2 (2010): 87–124; Ugo A. Perego and Jayne E. Ekins, “Is Decrypting the Genetic Legacy of America’s Indigenous Populations Key to the Historicity of the Book of Mormon?” Interpreter: A Journal of Mormon Scripture 12 (2014): 237-279.
[4] One alternative I would strongly recommend over the AEBOM is Grant Hardy’s Maxwell Institute Study Edition of the Book of Mormon. See my review in Stephen O. Smoot, “Feasting on the Book of Mormon,” Interpreter: A Journal of Latter-day Saint Faith and Scholarship 31 (2019): 143-150.