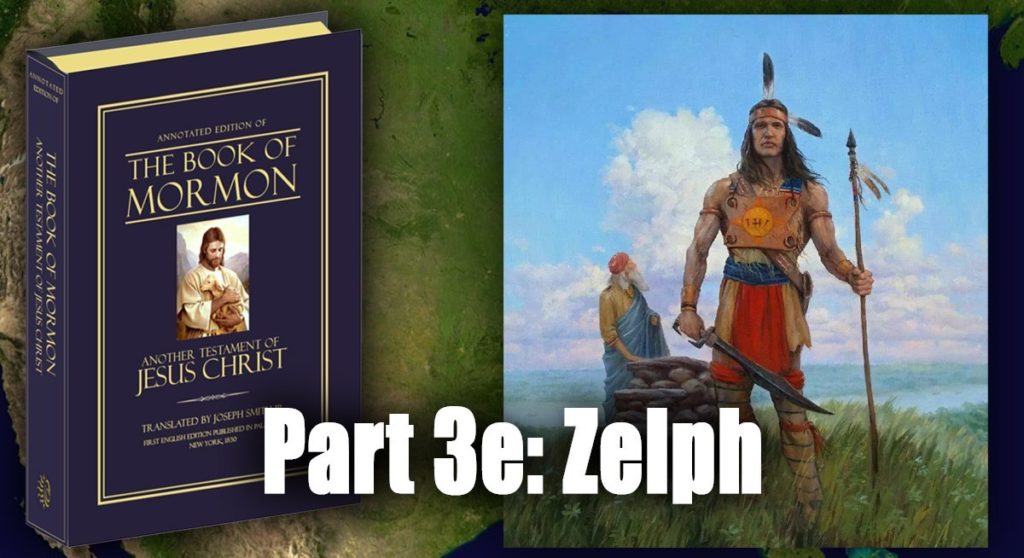 It would be no exaggeration to say that Zelph—or, more properly, the incident involving the recovery and identification of his remains—is an important tentpole in arguments attempting to situate the Book of Mormon in the “heartland.” This is seen clearly in the Annotated Edition of the Book of Mormon (AEBOM). One of the “sacred places in the land of promise” is said to be Zelph’s Mound (417). A map of Book of Mormon geography in North America is created “based” in part on the premise that “Joseph Smith did have a vision of Zelph who was a Book of Mormon Chieftan in Illinois” (522). Zelph is offered as a correlation between the Nephites and the Hopewell civilization (538), and the “Zelph account journals” are listed as a “key North American document [sic]” (553) for establishing the Book of Mormon in the “heartland.” The AEBOM provides a verbatim reproduction of the account of the discovery of Zelph’s bones in Joseph Smith’s manuscript history (321) and uses Wilford Woodruff’s description of Zelph as “a large, thick-set man” to establish the plausibility of Helaman 1:15 in a “heartland” setting (344).

While Zelph might be of the utmost importance to David Hocking, Rod Meldrum, and other proponents of the “heartland” theory—even rising to the level of a sort of mascot for the movement[1]—the AEBOM‘s attempt to raise him from an obscure footnote in early Latter-day Saint history to the level of indisputable proof for a “heartland” setting for the Book of Mormon is not convincing.

Drawing from the best available Latter-day Saint historical scholarship, Book of Mormon Central has already explained at length why the recovery of Zelph’s remains cannot be used to establish a firm geography for the Book of Mormon in North America.[2] Rather than rehash this history, I recommend readers consult the Book of Mormon Central KnoWhy article and pursue its citations. The short answer is that due to contradictions and ambiguities in the surviving historical sources related to the Zelph incident, “we cannot be certain how Zelph relates to any specific Book of Mormon places or events, and therefore his story cannot be used as proof in support of any particular geography.” Furthermore, even if we grant the basic reliability of the extant historical sources related to the Zelph incident, proponents of a Mesoamerican geography for the Book of Mormon certainly have no problem incorporating Zelph into their model.[3] Heartland advocates such as Hocking and Meldrum therefore don’t “own” Zelph as a piece of evidence that can only work for a North American setting for the Book of Mormon.

But readers need not take my word for it. They need only consider the judgement of Elder John A. Widtsoe of the Quorum of the Twelve. Writing in 1950, Elder Widtsoe said this about the Zelph episode:

As far as can be learned, the Prophet Joseph Smith, translator of the book, did not say where, on the American continent, Book of Mormon activities occurred. Perhaps he did not know. However, certain facts and traditions of varying reliability are used as foundation guides by students of Book of Mormon geography. . . . [O]n a journey into northwestern Missouri, led by the Prophet, the skeleton of a large man was uncovered near the Illinois River. Joseph Smith said it was the remains of a white Lamanite named Zelph, a leader among this people. This is not of much value in Book of Mormon geographical studies, since Zelph probably dated from a later time when Nephites and Lamanites had been somewhat dispersed and and wandered over the country.[4]

Not surprisingly, the editors of the AEBOM decided to overlook Elder Widtsoe’s cautious assessment in favor of Joseph Fielding Smith’s characteristically authoritative declaration on a matter under considerable dispute such as this (517). There can be no doubt that when it comes to any potential evidentiary weight Zelph might have for Book of Mormon geography, Elder Smith’s views are given pride of place over those of Elder Widtsoe (which aren’t even so much as mentioned in the AEBOM) because the former amenable to the ideological agenda of the editors. Notwithstanding, readers of the AEBOM should be aware that Zelph has never been used to establish apostolic consensus on the matter of Book of Mormon geography. What the editors of the AEBOM have done with its treatment of Zelph is to cherry-pick the views of a single General Authority that validate their preferred theory while ignoring the views of another General Authority that invalidates such.

What is the true significance of this document in establishing a geography for the Book of Mormon? As Matthew Roper explains:

In June 1834, the Prophet dictated a letter to Emma that mentioned experiences of his journey from Ohio to Missouri with Zion’s Camp. He spoke of “wandering over the plains of the Nephites, recounting occasionaly the history of the Book of Mormon, roving over the mounds of that once beloved people of the Lord, picking up their skulls & their bones, as proof of its divine authenticity.”  I think it likely that Joseph Smith alluded to the Zelph episode in this letter, although he did not mention the warrior by name, his vision, or the details of what he may have learned through revelation. It is clear that he associated the mounds and bones encountered during the journey with the remains of Nephites. It is unclear, however, what geographical information this statement might convey about Mormon’s narrative, since “plains of the Nephites” is not a geographical designation in the Book of Mormon. The Book of Mormon indicates that many Nephites and Lamanites migrated from the land with which the Book of Mormon is concerned to other regions (Alma 63:4–9; Helaman 3:3–16). Even those who migrated northward were eventually “hunted, and driven forth” and “scattered upon the face of the earth” (Helaman 3:16). We are left to wonder if Zelph died in battle defending Mormon’s people in the late fourth century AD or if he perished defending a group of people who had previously migrated to parts of North America during or after Book of Mormon times. In any event, Joseph Smith’s reference to the mounds, plains, and bones of the Nephites does not specify where in the Americas the events described by Mormon took place.[6]

Joseph’s 1834 Zion’s Camp letter is used by the editors of the AEBOM to draw specific points about the extent of Nephite settlement, when in fact the document “says nothing specific about the extent of Nephite settlement, or about the specific area over which Zion’s Camp had been wandering that reminded at least some of its members of the Book of Mormon, or at what point in their thousand year history the Nephites were believed to have been in this area.” All it does show is “a connection in the minds of some, as of summer 1834 at least, between Book of Mormon history, Nephites, and a site in eastern North America.”[7] But it has never been disputed by Mesoamerican geography theorists that Joseph Smith and other early Latter-day Saints associated Book of Mormon peoples and events with locations in North America. The argument from such theorists is that Joseph’s views on Book of Mormon geography, whatever they may have been, were his own, as there is no evidence heretofore offered by “heartland” proponents that his views came from revelation. They furthermore argue that Joseph Smith did not exclusively believe the events of the Book of Mormon took place in North America, and so an appeal to his June 4 letter to Emma must be couched in the larger context of the available historical record.[8]

Hocking and Meldrum are trying to spin the straw of Joseph Smith’s June 1834 Zion’s Camp letter into geographical gold. In this endeavor, however, as with their attempt to use Zelph to prove a “heartland” setting for the Book of Mormon, they have come crashing against the consensus of reputable Latter-day Saint historians and are begging many important questions about what these documents can actually determine about a supposedly revealed Book of Mormon geography.