The Dawning of a Brighter Day 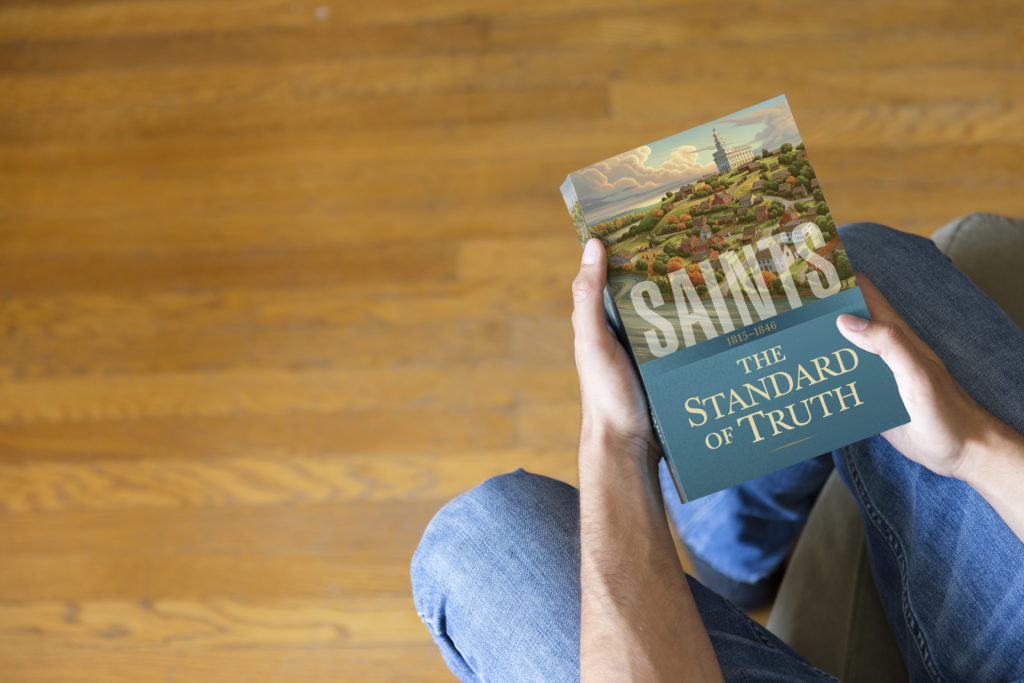 Abstract: The new volume Saints: The Story of the Church of Jesus Christ in the Latter Days: The Standard of Truth: 1815–1846, published under the auspices of The Church of Jesus Christ of Latter-day Saints, is a monumental step forward in how the Church tells its history. It is a landmark achievement, the culmination of years of painstaking research conducted by the Joseph Smith Papers Project and the Church History Department. Besides being a commendably readable narrative that will prove enjoyable for Latter-day Saints of many ages, The Standard of Truth is also arguably the most transparent history of the life of Joseph Smith and early Latter-day Saint history ever written.

In the February 2018 issue of the Ensign, the official magazine of The Church of Jesus Christ of Latter-day Saints for adults, Elder Steven E. Snow, General Authority Seventy and Church Historian and Recorder of the Church, introduced “a new four-volume series called Saints: The Story of the Church of Jesus Christ in the Latter Days” to readers.[1] The first volume of this series, The Standard of Truth: 1815–1846, “tells the story of the Restoration, from Joseph Smith’s childhood to the Saints receiving ordinances in the Nauvoo Temple in 1846.”[2] As with the other three planned volumes,[3] The Standard of Truth “tells the stories of ordinary men and women from the earliest days of the Church.” Besides that, it “provides new detail and insight into better-known people and events from Church history.”[4]

Like past histories published by the Church, The Standard of Truth “focuses on [the] sacred past” of the Latter-day Saints.[5] It chronicles the life and ministry of Joseph Smith, his childhood and adolescence, his early visions, his recovery and miraculous translation of the Book of Mormon, his reception of priesthood keys from angelic messengers, his restoration of the Church of Jesus Christ, his organization of priesthood quorums, his building of temples and cities, his overseeing of missionary efforts and gathering of converts, and, ultimately, his martyrdom. But The Standard of Truth stands out from past histories for several reasons. For starters, the volume is prefaced with an official endorsement by the First Presidency. “We encourage all to read the book and make use of the supplementary material available online,” the endorsement reads. “We pray that this volume will enlarge your understanding of the past, strengthen your faith, and help you make and keep the covenants that lead to exaltation and eternal life.”[6] Contrast this with Our Heritage: A Brief History of The Church of Jesus Christ of Latter-day Saints, published by the Church in 1996,[7] which contains no such comparable First Presidency endorsement. Clearly the highest leaders of the Church personally feel it is important that Church members are aware of this new volume and earnestly read it.

The Standard of Truth is a readable, enjoyable, page-turning narrative comprised of small, interweaving vignettes of the lives of the first generation of Latter-day Saint men and women. Rather than focusing solely on the life of Joseph Smith or other famous early Latter-day Saints, The Standard of Truth tells the stories of many of the ordinary men and women who had extraordinary experiences that prompted them to join the Church of Jesus Christ.

In addition to favoring an engaging narrative format over a “dry recitation of the facts,”[8] as of its full release on September 4, 2018,[9] The Standard of Truth is available for purchase at the cost of printing (a miniscule $5.75 USD) in fourteen languages.[10] It is also available online for free and on the Gospel Library app.[11] The online version is accompanied by supplemental study material, such as short encyclopedic “Church History Topics” articles.[12] Hyperlinks to this supplementary content, as well as to content on the Joseph Smith Papers website, are accessible in the footnotes that mark the main body of the text, making online navigation smooth, easy, and intuitive.

Finally, The Standard of Truth is remarkable for the unprecedented manner in which it unflinchingly addresses many of the major concerns, criticisms, or points of controversy raised by sincere questioners as well as critics of the Church of Jesus Christ.[13] This decision is understandable in light of recent trends. In the age of the Internet, when a variety of websites proffer conflicting and easily accessible claims about the life of Joseph Smith and the early Church, some Latter-day Saints, especially young and impressionable ones, are sadly persuaded by damning portrayals of the Prophet before they come into full possession of all the facts. The Standard of Truth hopes to rectify this problem by frankly incorporating these and other controversies into its narrative:

It is obvious from these examples that the recent admonition of Elder M. Russell Ballard has been taken to heart by the volume’s authors: “Gone are the days when a student asked an honest question and a teacher responded, ‘Don’t worry about it!’ Gone are the days when a student raised a sincere concern and a teacher bore his or her testimony as a response intended to avoid the issue. Gone are the days when students were protected from people who attacked the Church.”[24] In a shrewd move, the authors of The Standard of Truth have seamlessly incorporated these and other controversial aspects of early Latter-day Saint history into the overarching narrative, as opposed to drawing singular attention to each issue with isolated expositions.

The Standard of Truth does not address every single question or attack which has been raised by critics of the Church. For instance, there is no discussion within its pages of the Kinderhook Plates, although there is an accompanying essay on the subject.[25] Such would be unfeasible for a single volume, of course. And besides, the point of the book is not to act as a summa apologia for Latter-day Saint truth claims but rather to orient average Latter-day Saint readers to a new way of viewing their history and the lives of their religious forebears. That being said, I was surprised by some of the omissions in the book. I was, for example, hoping for a more in-depth portrayal of the history of the publication of the Book of Mormon than what is found in the book.[26] To be fair, further details about the printing and publication of the Book of Mormon are found in an accompanying essay.[27] I still personally believe, however, that incorporating some of this additional information into the main narrative of the book would have been beneficial. Likewise, there is no discussion of Joseph Smith’s efforts to study Hebrew in Kirtland, Ohio, beginning in January 1836.[28] Given how important Joseph Smith’s study of Hebrew was in fashioning his Nauvoo-era revelations and translations, I found this omission perplexing.

But these and other omissions do not dramatically detract from the overall quality of the book. Nor do they detract from what I think is perhaps the most significant aspect of The Standard of Truth. Given the range of controversial topics covered in its pages, its free availability online in multiple languages, the heavy promotional efforts untaken by the Church to raise awareness of its publication, the accessibility of a substantial amount of its cited primary source documents granted to the reader, and its accompanying “Church History Topics,” it is perhaps not an exaggeration to say that The Standard of Truth is the most transparent history of the life of Joseph Smith ever written.

Even a cursory glance confirms that The Standard of Truth meets the definition of “transparency” as exhibiting behavior of “operating in such a way that it is easy for others to see what actions are performed.” This definition, which strikes me as eminently reasonable, “implies openness, communication, and accountability.”[29] Never before in Mormon historiography–––not with Leonard Arrington, not with D. Michael Quinn, not with Richard Bushman–––have readers had such easy, almost effortless, access to the primary sources underlying a narrative of early Church history. The Church could easily have made readers trudge through page after page of material on the Joseph Smith Papers website and other sites to verify the accuracy of the citations in The Standard of Truth. There was nobody forcing the Church to spend the extra effort to make the primary sources in The Standard of Truth as available as feasibly possible to the reader. And yet the Church decided to do just that. This is by no means to disparage past historians of the early Restoration, such as those named above, who worked without the tools afforded to us today by the Internet, but rather to emphasize that when those tools were made available the Church availed itself of them to an unprecedented degree.

Inasmuch as “scholarly research in any academic discipline may . . . be labeled as (partly) transparent . . . if some or all relevant aspects of the research are open in the sense of open source, open access and open data, thereby facilitating social recognition and accountability of the scholars who did the research and replication by others interested in the matters addressed by it,”[30] and inasmuch as The Standard of Truth abundantly meets these criteria, then it is immensely arguable that the book is indeed the most transparent treatment of early Latter-day Saint history ever written.

Whether readers agree with this assessment or not, the publication of The Standard of Truth is nevertheless a landmark achievement. It heralds a new era in which the institutional Church moves away from the well-meaning but inadequate hagiographic and “faith promoting” history to a robust history that prioritizes sometimes grim “warts and all” honesty. But, as evidenced by my own experience reading the book (and as evidenced by what I am confident enough to say will be the experience of most readers), this transparency actually promotes faith and encourages the individual Latter-day Saint to deepen his or her testimony, despite or even because of the warts. If sunlight is indeed the best disinfectant, including the best disinfectant for doubt about the Church’s truth claims, as the Church very obviously recognizes with Saints, then when it comes to how we understand our past, as well as how we address the sincere concerns of our brothers and sisters in the gospel and reclaim our story from the hands of our enemies, Latter-day Saints today have much reason to rejoice in the dawning of a brighter day.

[1] Elder Steven E. Snow, “Saints: The Story of the Church of Jesus Christ in the Latter Days,” Ensign, February 2018, 58, online at https://churchofjesuschrist.org/languages/eng/content/ensign/2018/02/saints-the-story-of-the-church-of-jesus-christ-in-the-latter-days.

[3] “Volume 2 will cover the Saints’ challenges in gathering to the western United States and will finish with the dedication of the Salt Lake Temple in 1893. Volume 3 will narrate the global growth of the Church, ending with the dedication of the temple in Bern, Switzerland, in 1955. Volume 4 will bring the reader to the recent past, when temples dot the earth.” Snow, “Saints,” 59.

[9] Chapters 1–7 of The Standard of Truth were published serially in the Ensign from February–September 2018 ahead of its full release on September 4.

[23] The Standard of Truth, 531, 533-36, 548; online at “Topic: Nauvoo Expositor,” online at https://churchofjesuschrist.org/languages/eng/content/history/topics/nauvoo-expositor.