Charity: “The Greatest of All”
Stories of the Saints in the DR Congo, Part 2

Author’s note: This series shares six stories about members of The Church of Jesus Christ of Latter-day Saints from the Democratic Republic of the Congo. Each story is framed in the context of a Christlike attribute. This article with examples of charity is an adapted and expanded from part 2 of a presentation given at the FairMormon 2018 Conference. The video version of the entire FairMormon presentation is available on the FairMormon YouTube channel at https://www.youtube.com/watch?v=nJl9FvLKmjw

In this article, I will share some incidents that illustrate the charity of ordinary but extraordinarily caring families in the DR Congo.

Certain regions of the DR Congo suffer from near-constant warfare. Since the country’s independence in 1960, there has never been a peaceful change of government. At least seventy armed groups are currently operating in the east of the country. As elsewhere in the world, the suffering is intense and death is commonplace, especially for children caught in the crossfire. 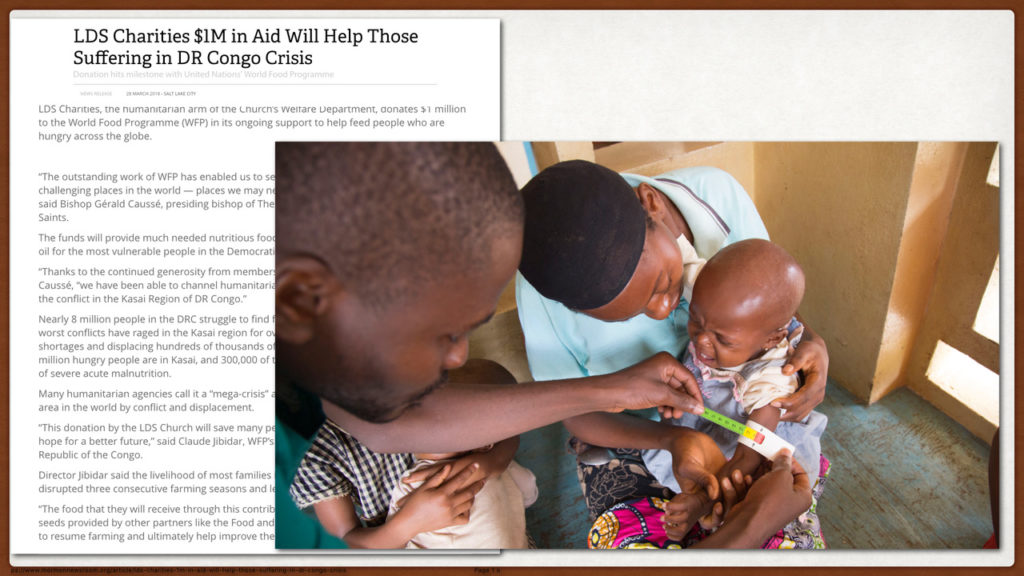 Through contributions from members of the Church, LDS Charities recently was able to offer a million dollars toward alleviating hunger in war-torn areas of the DR Congo.[2] In addition to these significant financial contributions, the Church is promoting helpful changes in the philosophy of giving that will allow these contributions to be more effective and long-lasting. For example, at a recent gathering in London, Elder Jeffrey R. Holland called on non-governmental organizations (NGOs), governments, and faith groups to re-focus their efforts, saying: “In the past charitable institutions have provided financial support, medical treatment, and other physical needs for refugee victims, all of which are still needed. But we now understand that we must look to emotional and spiritual needs as well.”[3]

Often, the emotional and spiritual needs of individuals are best addressed through the humble efforts of ordinary but extraordinarily caring families. Though less visible to others than the financial and logistical help the DR Congo receives through generous friends in many nations, evidence of the spirit of the Christlike charity of the Congolese people themselves blesses their country in intangible but highly significant ways. 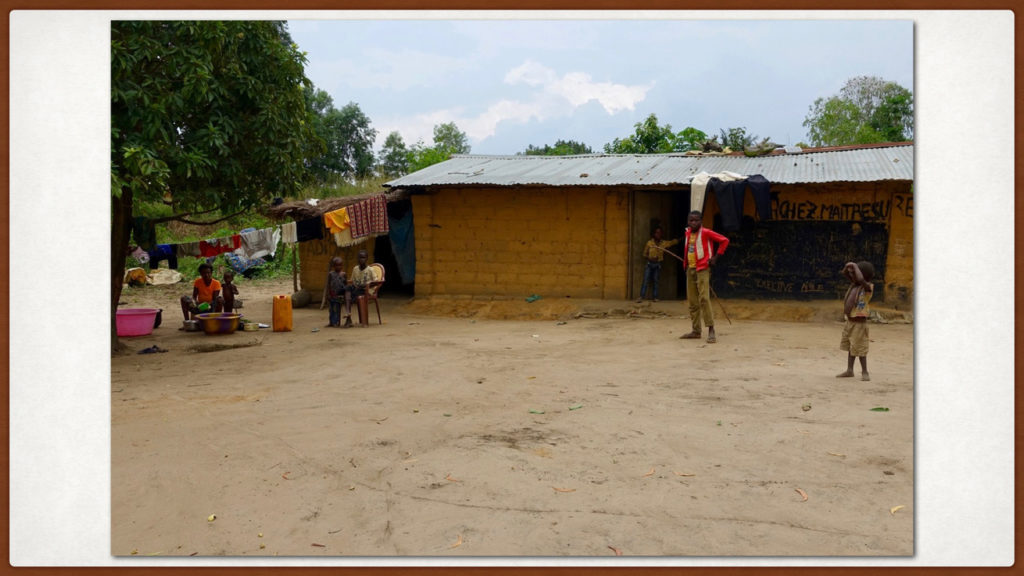 This is the home of Alain Mota in M’poke N’sele on the Bateke Plateau. Alain, not yet a member of the Church, is a schoolteacher in another village that is an hour away by motorcycle. At left, Alain’s wife interrupts her laundry chores to bathe a child. 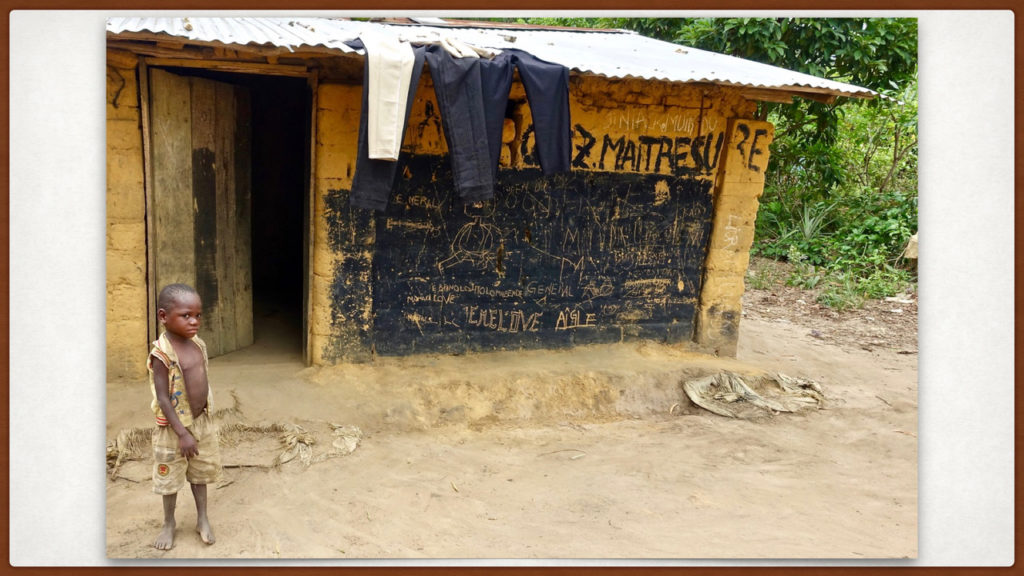 Alain said he had four children. I decided to capture them on film individually, from youngest to oldest. Here is the first child I saw. 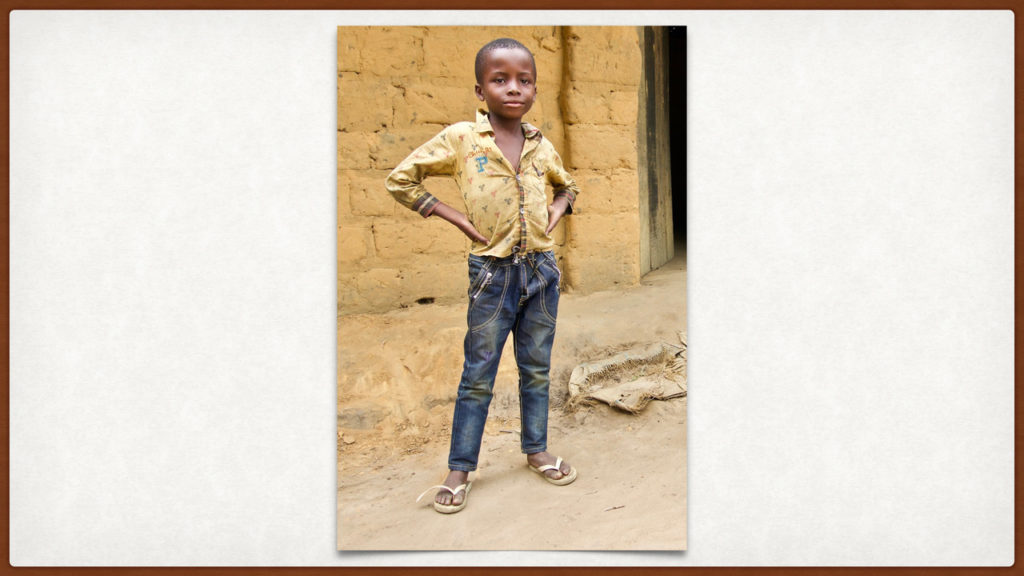 Here is the second child. 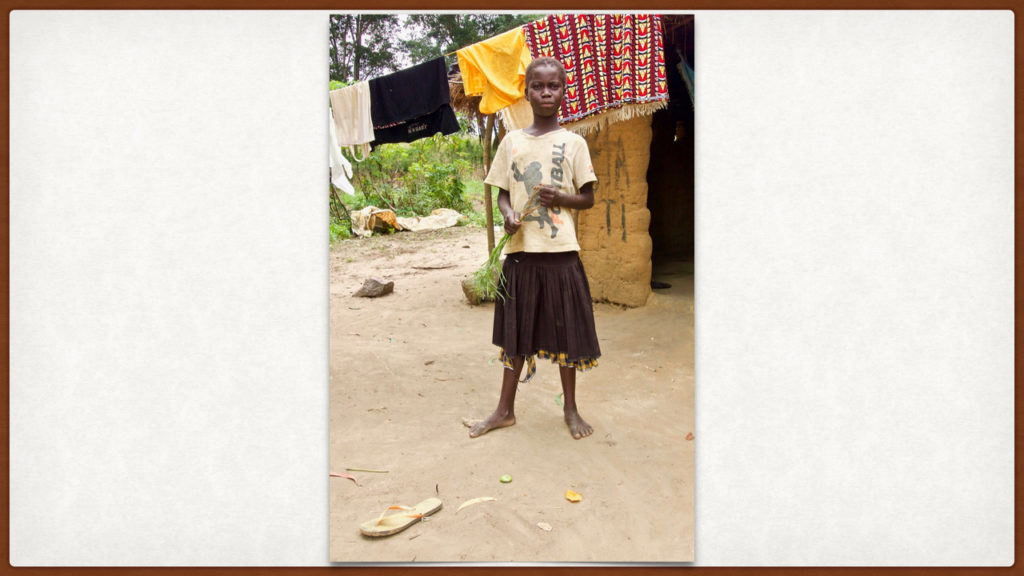 This is the third child, his daughter. 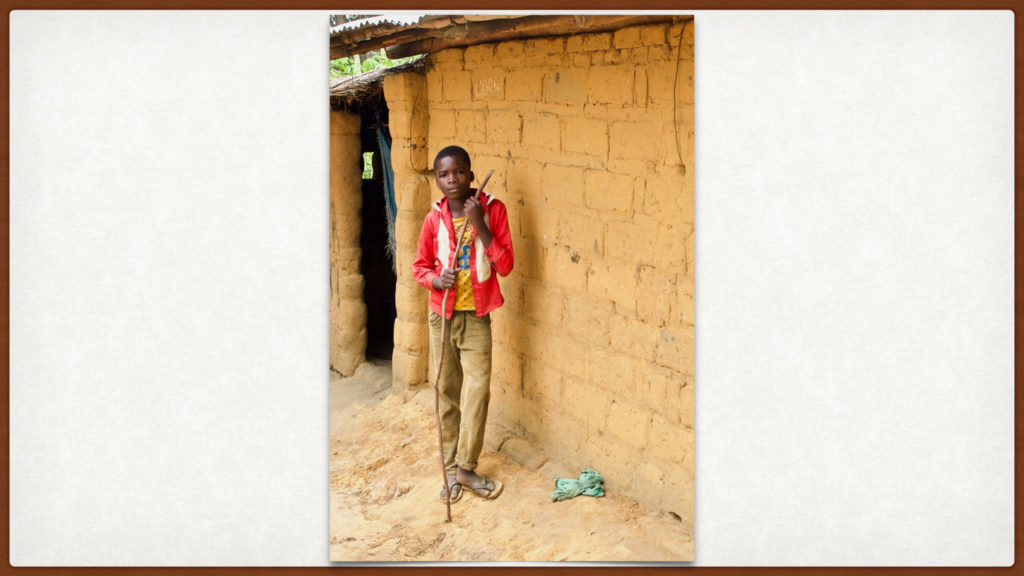 And this was, as I understood it, the fourth, a son. 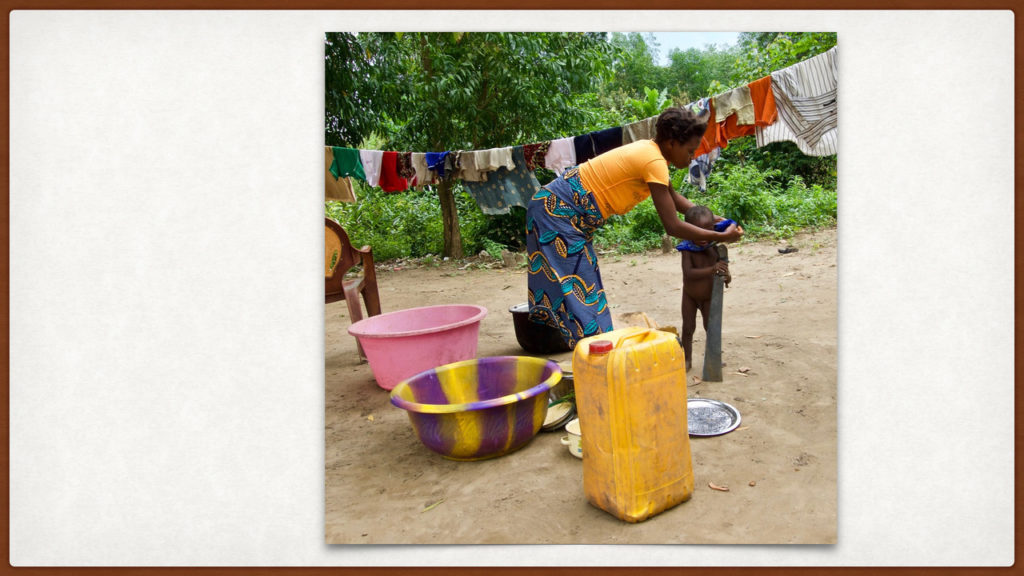 But wait, if he has four children, who then is this toddler, a fifth child? 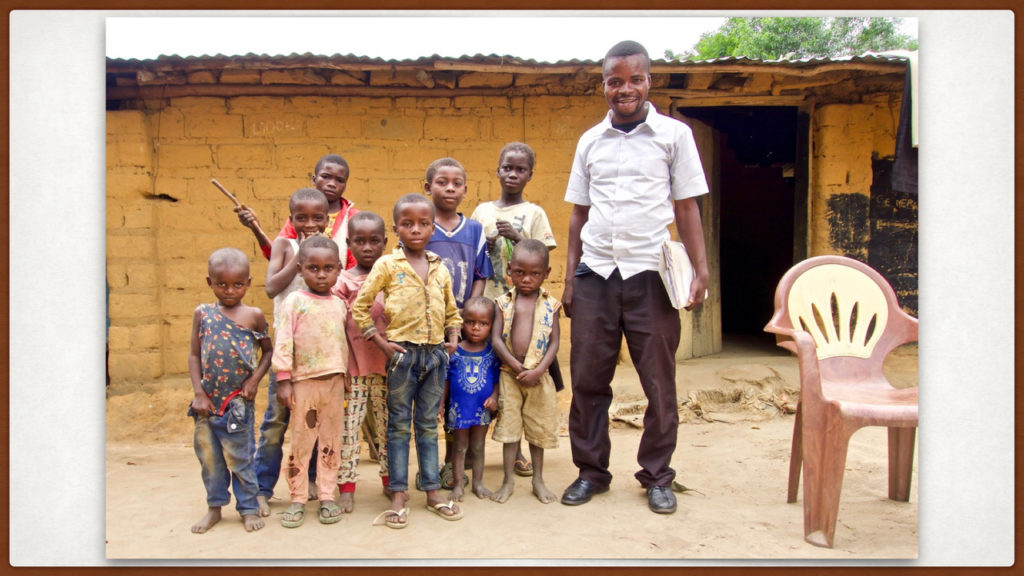 When the parents finally gathered everyone for a group photo, we learned that there were at least ten children living in their small home — their own four children plus six others.

A friend observed that the unsponsored, domestic charity of individual Congolese families is a significant contributor to the welfare of children at risk. Indeed, given pervasive war, famine, and poverty in many parts of the Congo, there are far fewer “orphans" in institutions and on the street than one might otherwise expect. So many people, even the very poor, take abandoned children like these into their homes out of pure goodness. We who are so richly blessed in material ways must learn to emulate the giving in kind of such families, impoverished in means yet rich in the spirit of love. 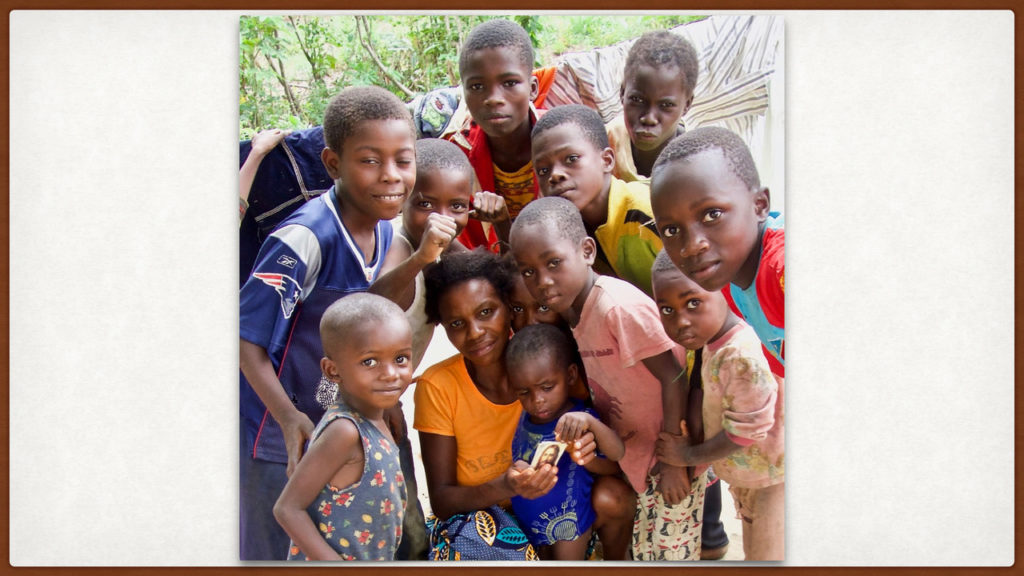 Who can say what form of charity will produce the most significant and long-lasting results — the financial and technical support of generous international friends or the rigorous toil of our Christlike Congolese neighbors who sacrifice what little they have to secure the future of Congo’s children?

As we shared a small stack of pass-along cards with an image of Jesus on the front to the thrill of the children, it was clear from the expression of this saintly mother that she knew, as we knew, something of the inexhaustible goodness of the Savior on whom they relied. He was not only the source of the “daily bread”[4] and daily breath[5] that allowed them to “live”[6] but also of the daily strength that inspired them to love. 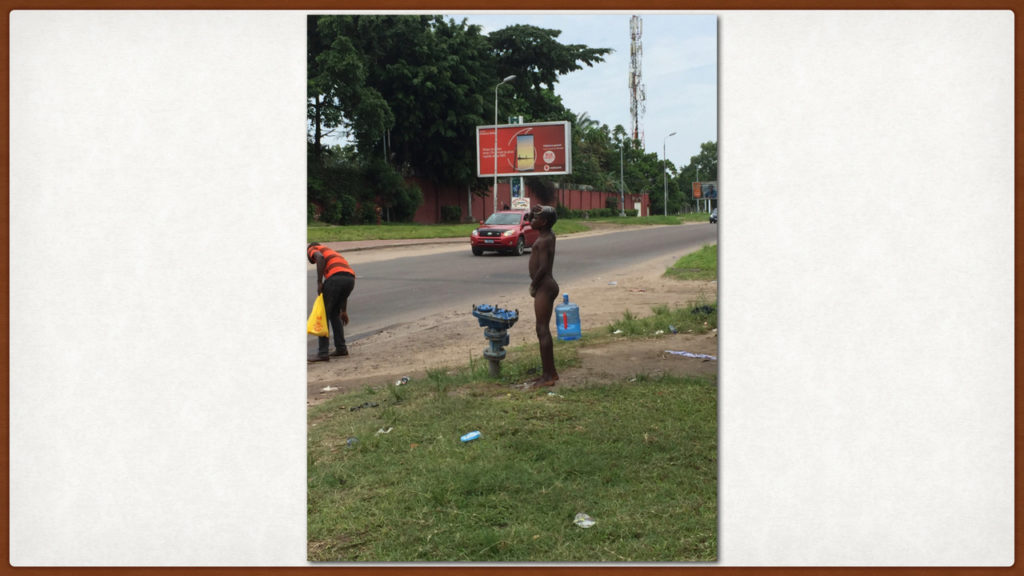 Moïse washing himself along the side of the road.

Other children are not so lucky. The United Nations envoy responsible for rescuing children from difficult, exploitative situations in our part of the Congo told us that there are at least 30,000 street children in Kinshasa alone. He said that about 70% of them actually had parents, but were expelled from their homes by mothers and fathers who have become convinced that they are possessed by an evil spirit. Such parents, desperate to find the source of troubles and tragedies in their homes, are victims of ill-founded confidence in exorcists. These exorcists are typically motivated by large payments to find a scapegoat in one of the family’s children.

Here Moïse (French for Moses) a street child we came to love washed himself on the street. Elder and Sister Romney, our public affairs couple, always had a soft spot in their hearts for these children. For various reasons, these children were often short of clothing. 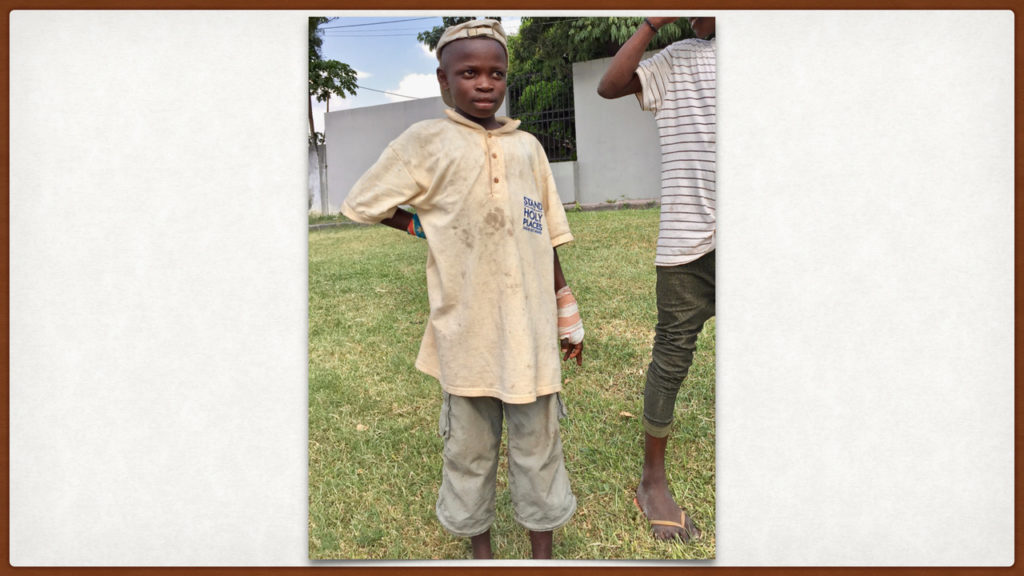 Elder and Sister Gates, our temple construction couple, decided that Moïse needed a new shirt and gave him this one. He really liked it, but, understandably, it did not stay clean for long and soon disappeared.

One day, Elder and Sister Huber, our humanitarian couple, found Moïse lying on the street and bleeding profusely. A man had made him carry some glass, but in doing so, a piece cut his hand deeply. The man had fled. Had the Hubers not found him he might have bled to death. 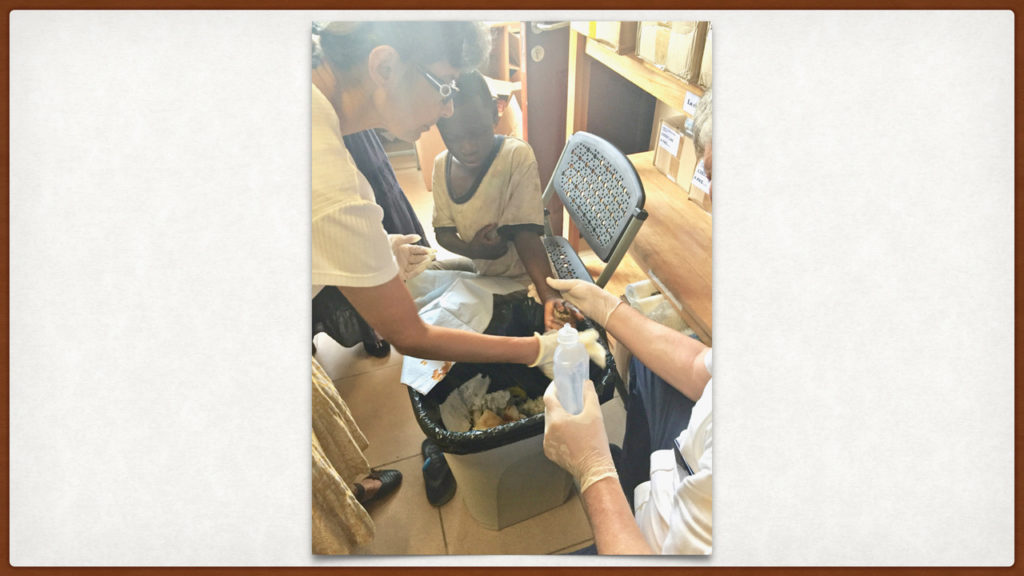 Because “Good Samaritan” laws are of limited effectiveness in the DR Congo, the missionaries have to walk a fine line: offering help in a crisis while not putting the Church or themselves in a situation of liability. In this case, the Hubers made sure Moïse got urgent care. Here, Sister Baehrel (the wife of the mission president and a trained nurse) put on a clean bandage.

Of course, many of these children do not make it to adulthood. Those who survive on the streets are at risk for drugs, crime, abuse, and exploitation. 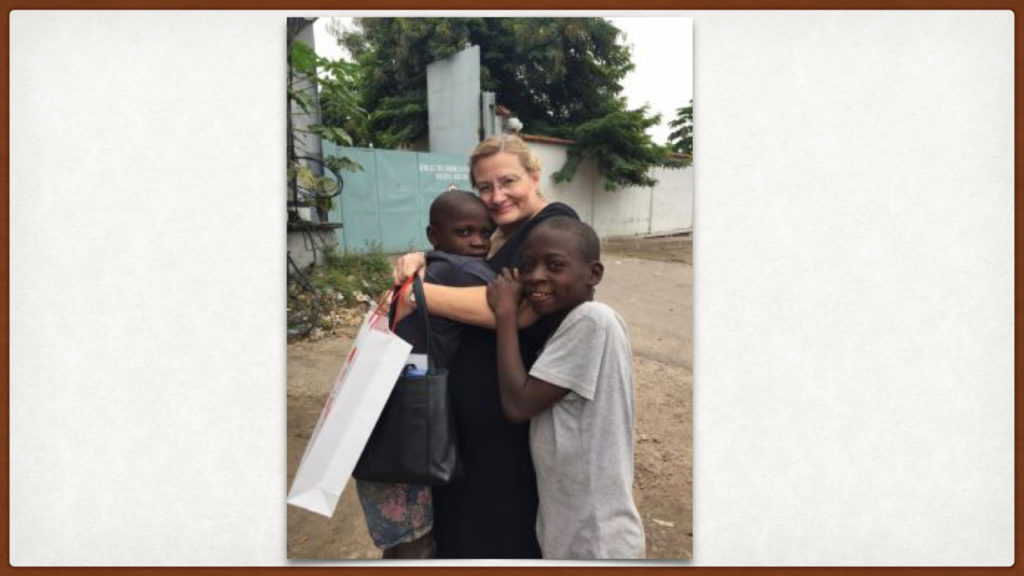 Moïse and others would watch for us as we walked to Church on Sunday mornings. Sometimes they would attend Church with us. When Moïse would see my wife Kathleen coming, he would run to her, jump up, hug her tight, and would not let go. Kathleen returned in kind. He had no mother of his own who could give him such a hug. 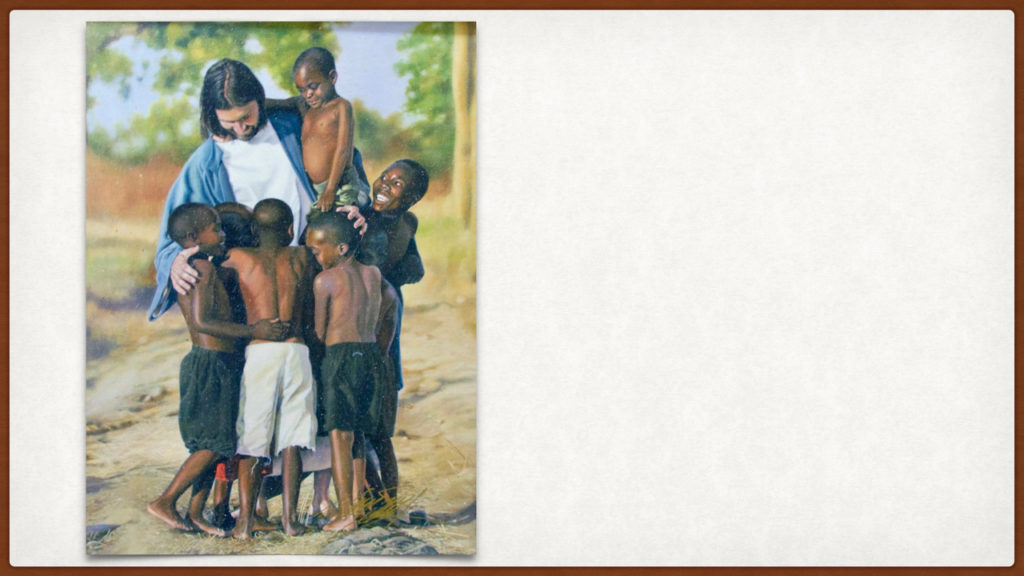 This scene came to mind later, when we were introduced to this painting by Liz Lemon Swindle of a group of children from Zambia greeting an artist’s model for Jesus. 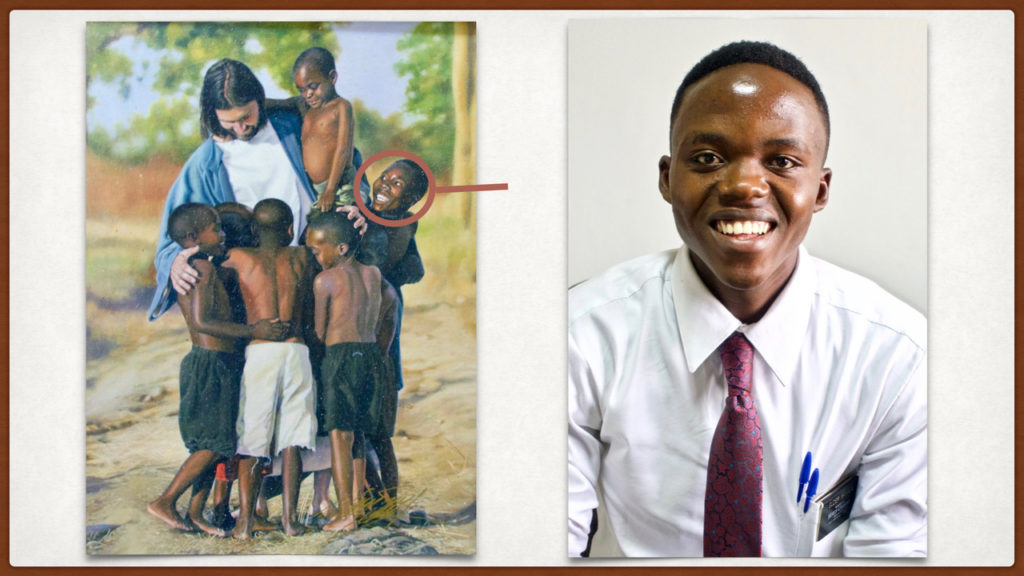 The painting served as a reminder that some of these boys may grow up to be missionaries. Vincent Sakala, at right in the painting, later served in our mission. His twin brother Victor served a mission in Uganda at the same time and both were released the same week. Kathleen arranged for them to meet at the Nairobi airport on their way home to Zambia. 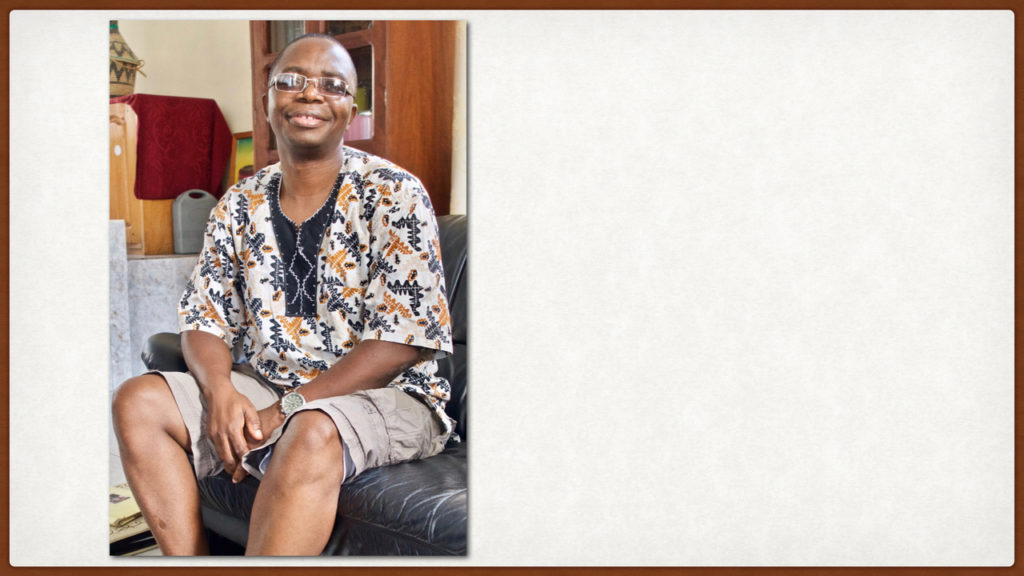 We also remembered the story of Bernard Balibuno. As a teenager, over a period of several months, he made his way alone from the DR Congo to South Africa with no money and no passport during the turbulence of the last  days of the Mobutu Sese Seko, the notorious dictator. Homeless and hungry, standing with a group of friends outside a bus station, the mission president spotted him and felt moved to approach him. Eventually, Bernard joined the Church, and through the support of member friends in his ward, was able to attend BYU-Hawaii. 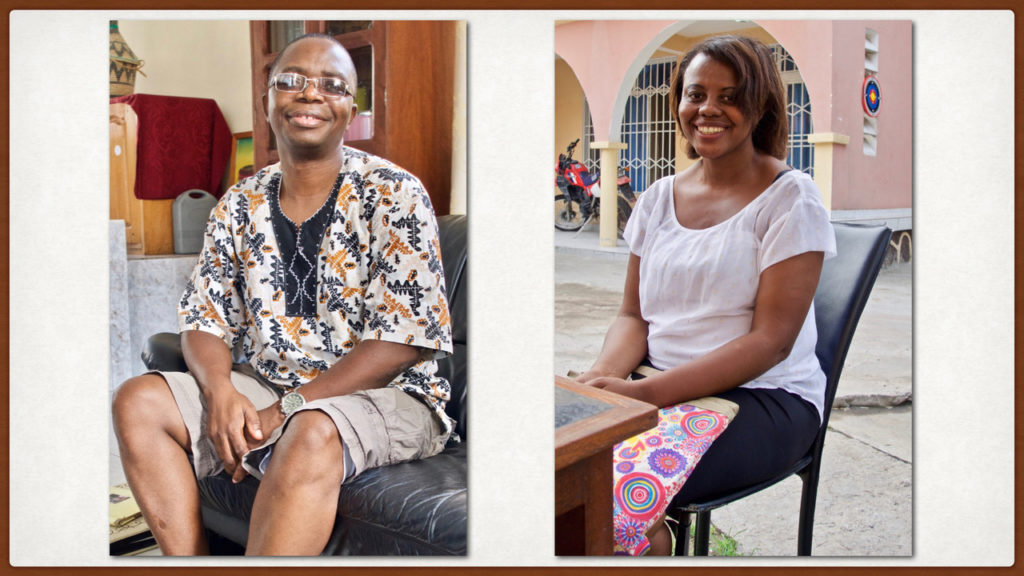 Eventually, he convinced Yaya, a childhood friend still living in his village in the DR Congo, to come to Hawaii. She also joined the Church and they were married. 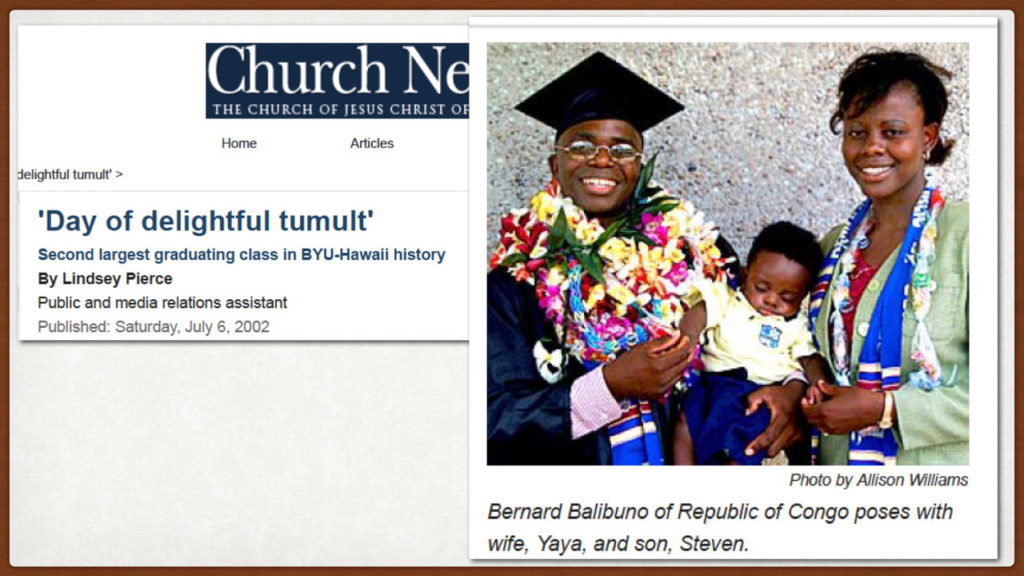 One child later, Bernard received his diploma and was asked to speak at the graduation ceremony. 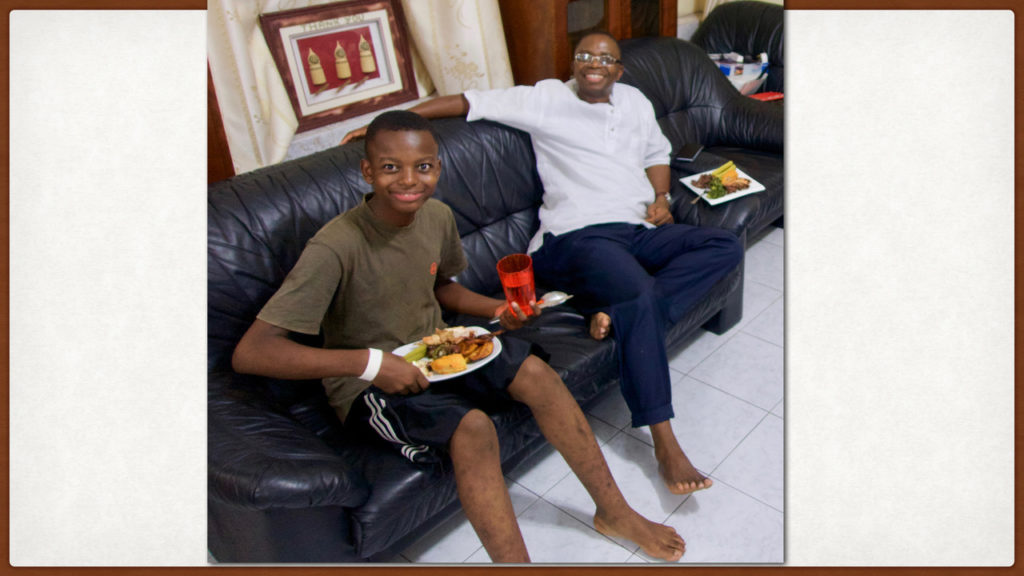 After finishing a graduate degree at George Washington University and the BYU Marriott School of Management, Bernard returned to the DR Congo. This once-wandering waif now serves as the national director of the Catholic Agency For Overseas Development (CAFOD), responsible for a large portfolio of humanitarian projects. Recognizing how others have blessed their lives, Bernard and Yaya have helped raise several children of extended family and friends in addition to providing for their own large family.

Some of the material in this article has been adapted from oral history interviews. My sincere appreciation to Bernard and Yaya Balibuno and their family for sharing their inspiring stories and for their suggestions, additions, and corrections. Thanks also to Matthew K. Heiss of the global support and training division at the Church History Library for his encouragement and support in the publication of this story, and for affirming permission on behalf of The Church of Jesus Christ of Latter-day Saints to use oral history-related material found in this article.