I have been pleasantly surprised at the great reception shown for the retouching and colorizing work I did on the daguerreotype that is thought to be Oliver Cowdery. Many kind people sent their compliments. The Church News chose to run a story on the piece and I conversed briefly with R. Scott Lloyd, Church News staff writer, about the project for that story. It has since been re-published in the Deseret News and on ChurchofJesusChrist.org, which is a great honor, and I am thrilled that it has perhaps given Interpreter: A Journal of Mormon Scripture greater exposure.

I found four photos of David Whitmer and one of Martin Harris. Since there were more photos available of Whitmer than Harris, I decided to try Whitmer next. ((David Whitmer lived 13 years longer than Martin Harris, and 38 years longer than Oliver Cowdery, which helps explain why there are more photos of him than the other two. The only photo of Martin Harris I’ve found so far is one where he appears elderly, sitting on a chair with a cane. This is in the possession of the LDS Church. See http://en.wikipedia.org/wiki/File:Martinharrisat87.jpg, and http://history.churchofjesuschrist.org/article/doctrine-and-covenants-martin-harris?lang=eng. In order to do the same retouch work to this photo of Martin Harris, I’ll need to gain access to a higher quality copy of it. A digitization of the Church’s copy is currently in progress.)) The photo where Whitmer appears the youngest, to me, is a joint photo with John Whitmer, his brother. This photo, I believe, is owned by the Community of Christ, and is said to be taken circa 1870. ((If taken in 1870, this photo would place David at about age 65, and he looks younger than that, to me, and younger than any of the other photos of him, with color in his hair, and less wrinkles on his face. I do not know the provenance of this photo, but the photo appears to held in the Community of Christ archives.)) I could not find a high resolution image of this photo online and I did not seek access to it.

The third photo I found is of Whitmer late in life, perhaps just a few years prior to his passing in 1888, taken by Jacob T. Hicks. ((This photograph, and the next, are both housed at the Clay County Museum, in Liberty, Missouri, and part of the Jacob T. Hicks collection: http://www.flickr.com/photos/claycountymuseum/sets/72157619435838298/. As noted at this link, Hicks may have pioneered some of the first photographic negative techniques, namely the “wet plate” type, the negative being made on glass. The museum holds some 400 of these glass negatives by Hicks. A photo of Jacob Hicks, perhaps a self portrait, is available here: http://www.flickr.com/photos/claycountymuseum/3607556474/.)) This photo was high resolution, but was overexposed such that a lot of detail in Whitmer’s face is washed out.

The fourth photo I came to is perhaps the most famous of David Whitmer. I do not know the date of this photo, but it appears it was also taken by Jacob T. Hicks. This photo seems to have been the basis for a number of drawings, engravings, and paintings of Whitmer, including one of the most well-known portraits by artist Lewis A. Ramsey. ((Patrick Bishop reports that Lewis A. Ramsey produced a number of such artwork, fourteen of which were hanging in the Salt Lake Temple at the time of Ramsey’s passing in 1941. Bishop notes that the Church commissioned Ramsey to paint the Three Witnesses, of which this is likely the painting of Whitmer. Patrick A. Bishop, “Images of Oliver,” in Days Never to Be Forgotten: Oliver Cowdery, ed. Alexander L. Baugh (Provo, UT: Religious Studies Center, Brigham Young University, 2009), 123–43.)) The photo appears to have the most detail of the four, and was available in good resolution, so this is the photo that I chose to retouch and colorize. Here David Whitmer appears to be in his 60s or 70s (placing the date between 1865-85), and wears clothing similar to the figure in the Oliver Cowdery daguerreotype: a large silken bow tie, and a two-tone collar suit. His suit also appears to have a very large and visible weave. 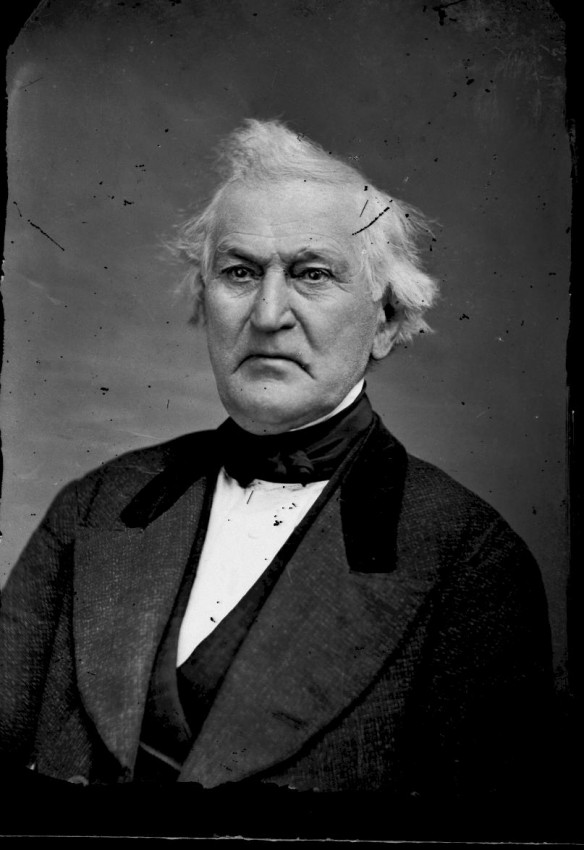 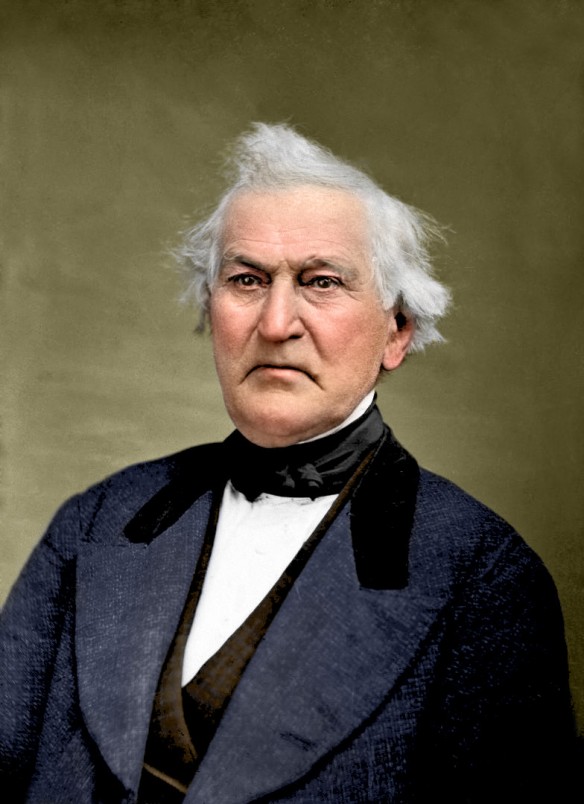 A bright light enveloped us where we were, that filled at noon day, and there in a vision, or in the spirit, we saw and heard just as it is stated in my testimony in the Book of Mormon. I am now passed eighty-two years old, and I have a brother, J. J. Snyder, to do my writing for me, at my dictation. [Signed] David Whitmer. ((Letter of David Whitmer to Anthony Metcalf, Mar. 1887, cit. Anthony Metcalf, Ten Years Before the Mast (Malad, Ida., 1888), 74; quoted in Richard Lloyd Anderson, Investigating the Book of Mormon Witnesses (Deseret Book: 1981), 86.))