The Symbol of the Cross with Gaye Strathearn 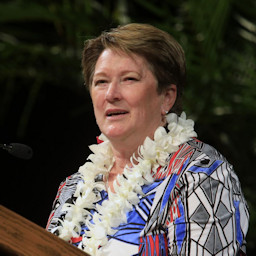 The Interview: Good Friday is seen as the most holy day in Christian tradition, yet it is not particularly emphasized in Latter-day Saint dialogue. And outside of Easter lessons, pictures of the crucifixion are rarely displayed. In contrast, depictions of the suffering of Christ on the cross hold prominent positions within most Christian buildings whether local meetinghouses or grand cathedrals.

Dr. Gaye Strathearn grew up Latter-day Saint in a small branch in Australia. She and her fellow members did celebrate Good Friday. When she spent her first Easter on BYU campus, she was surprised that what she had always celebrated as a sacred day was pretty much a non-event. This has always bothered her and has led her to research the topic. In “Christ’s Crucifixion: The Reclamation of the Cross,” she explores the relationship of Latter-day Saint teachings and culture regarding the crucifixion. Strathearn isn’t arguing to put crosses on our buildings or forgetting the seminal event of Gethsemane, but she does think we need to put a bit more of our attention on the instrument of Jesus’ death, the cross.

Some Latter-day Saints may feel uncomfortable with this prospect, which is natural. Even among early Christians, some followers were unsure how to deal with the crucifixion. It was an ugly way to die, and they struggled with the idea that the Son of God would be executed in such a shameful manner. The accounts of Jesus’ Crucifixion in the four Gospels are the most detailed accounts that we have of an ancient crucifixion. But while they describe what happened, only the writings of Paul discuss the why of Christ’s Crucifixion. Paul taught early Christians that the most important things Christ had delivered unto mankind were the Crucifixion and the Resurrection.

Strathearn details four reasons why she believes the cross should hold an important place in our private and public discourse, both among ourselves as Latter-day Saints and in conjunction with our Christian friends.

Listen in as Gaye Strathearn not only shares the historical background of crucifixion but also shows how rooted Latter-day Saint scripture is in the death of Christ on the cross.

About Our Guest:  Gaye Strathearn is an associate professor in the Department of Ancient Scripture and in the Ancient Near East Studies program at BYU. She has taught at BYU since 1995, including a year at BYU’s Jerusalem Center for Near Eastern Studies. Dr. Strathearn received her Bachelor of Physiotherapy from the University of Queensland (Australia), a BA and MA in Near Eastern Studies from BYU, and a Ph.D. in Religion (New Testament) from the Claremont Graduate University. Her research centers primarily on New Testament topics, especially those of interest to Latter-day Saints.

Transcript:  For a transcript of this podcast (once its available from LDS Perspectives), go to http://www.ldsperspectives.com/2019/04/10/symbol-cross/.