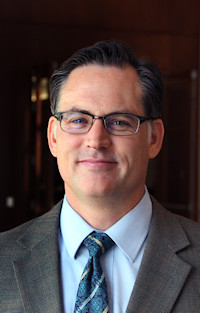 The Interview: In this episode of the LDS Perspectives Podcast, Laura Harris Hales interviews Mark Ashurst-McGee, a co-editor of a new book, Producing Ancient Scripture: Joseph Smith’s Translation Projects in the Development of Mormon Christianity.

The Book of Mormon is well known, but there were several subsequent texts that Joseph Smith translated after the Book of Mormon. This collaborative volume is the first to provide in-depth analysis of each and every one of Joseph Smith’s translation projects. The compiled chapters explore Smith’s translation projects in focused detail and in broad contexts, as well as in comparison with one another. The various contributors approach Smith’s sacred texts historically, textually, linguistically, and literarily to offer a multidisciplinary view.

While most of the contributors are Latter-day Saints, not all are. From its inception, the book was meant to be a scholarly work that anyone could read and engage in—whether a member of the Church of Jesus Christ of Latter-day Saints or from any other branch of the Restoration or any denomination of Christianity or any other faith or no faith. Due to this intentional editorial decision, there is nothing in the book asserting or excluding supernatural involvement. The various translation projects are studied not in terms of the ancient origins they claim for themselves but rather in terms of their translation into English by Joseph Smith in the modern age.

Here is a brief overview of the comprehensive coverage provided in the book:

About our Guest: Mark Ashurst-McGee is a senior historian in the Church History Department and the senior review editor for the Joseph Smith Papers Project, where he serves as a specialist in document analysis and documentary editing methodology. He is a co-editor of several volumes of the Joseph Smith Papers (Church Historians Press, 2008–), of Foundational Texts of Mormonism (Oxford University Press, 2018), and of this podcast’s featured book, Producing Ancient Scripture (University of Utah Press, 2020).