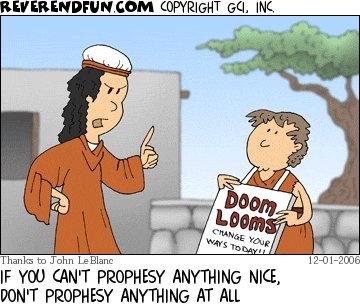 All Men Were Offended Because of Enoch (Moses 6:37)

As was described in a previous Essay,[2] Moses 6–7 depicts scenes of wars, bloodshed, and slaughter among the people to which Enoch was commanded to preach.[3] The Qumran Book of Giants account likewise begins with references to “slaughter, destruction, and moral corruption”[4] that filled the earth.[5] In view of the depth of the wickedness of the people, it was impossible for Enoch to “prophesy nice” so as to please the people. Hugh Nibley describes the situation as follows:[6]

[Enoch] goes out and preaches, and all men are offended because he doesn’t bring good news. Remember what the people say to Samuel the Lamanite, “Tell us what’s right with Zarahemla; don’t tell us what’s wrong with Zarahemla.” Samuel the Lamanite said, “When a person comes and tells you how wonderful you are, you clothe him in fine apparel; you carry him on your shoulders and say he is a true prophet. If he tells you your sins, you immediately cry out, kill him; he’s a false prophet.”[7] This is the situation here. Nobody likes [Enoch] at all. Notice: “… standing upon the hills and the high places, and cried with a loud voice, testifying against their works; and all men were offended because of him.”[8] Nobody liked his very negative record. Why? Because he testified against their works. … And so they tried to pass him off as a nut.[9]

As with Alma and Amulek, who the Lord did not suffer to “stretch forth [their] hands, and exercise the power of God which [was] in [them],”[10] Enoch was initially constrained from physical action, relying solely on the “power of the language which God had given him.”[11] But then, as now, their deeds were recorded both on earth and in heaven “that the judgments which [God] shall exercise upon them in his wrath may be just; and the blood of the innocent shall stand as a witness against them, yea, and cry mightily against them at the last day.”[12]

Consistent with the Book of Moses account that describes the book of Adam as being handed down to Enoch, the Zohar teaches that Enoch had a copy of the “book of the generations of Adam” from the same heavenly source that revealed it to Adam.[13] Hugh Nibley gives a more specific description of how the pattern of sacred books functions in the stories and teachings of Latter-day Saint scripture:[14]

It all begins on earth with the “book of the Generations of Adam,”[15] a complete record of names and events and of God’s dealing with his children on earth. He requires the Saints in every age to keep such a book, or rather to continue the original, adding their own names and histories to it, as they “arrange by lot the inheritances of the saints whose names are found, and the names of their fathers, and of their children, enrolled in the book of the law of God,”[16] which is the same as the “book of remembrance,”[17] which goes back to Adam[18] and is also “the genealogy of the sons of Adam.”[19] Enoch reads from the books to remind his people of “the commandments, which I [God] gave unto their father, Adam”[20] when he “called upon our father Adam by his own voice,”[21] and ordered them to pass it on: “Teach these things freely unto your children,”[22] and in time they are to reach us![23] The rule is that “many books … of every kind” are “handed down from one generation to another … even until they [the people] have fallen into transgression,”[24] at which time they disappear until another prophet brings them forth.

In Jewish tradition, several types of “heavenly books” are distinguished:[25]

Enoch’s Book of Remembrance as a “Book of Deeds”

The heavenly book referred to in the Book of Moses, as in related Jewish pseudepigrapha, resembles most closely a Book of Deeds. In Moses 6, we read of Enoch’s preaching to the people out of this “book of remembrance,”[26] in which both the words of God and the deeds of the people were recorded. Correspondingly, in the Book of Giants, a book in the form of “two stone tablets”[27] is given by Enoch to Mahujah to stand as a witness of “their fallen state and betrayal of their ancient covenants.”[28] In Pseudo-Jubilees, another fragmentary book found at Qumran, it is written that:[29]

In the Book of Moses, Enoch says the heavenly book was written “according to the pattern given by the finger of God.”[30] This may allude to the idea that a similar record of the wickedness of the people was being kept in heaven,[31] as attested in 1 Enoch:[32]

As Enoch is depicted as an author of the book of remembrance in Moses 6, so he is described in the Testament of Abraham as the heavenly being who is responsible for recording the deeds of mankind so that they can be brought into remembrance.[33] Likewise, in Jubilees 10:17 we read:[34] “Enoch had been created as a witness to the generations of the world so that he might report every deed of each generation in the day of judgment.” Thus, Enoch as a scribe and witness of the heavenly book of remembrance, as described in the Book of Moses, fits squarely into ancient Jewish teachings about Enoch.

This article was adapted and expanded from Bradshaw, Jeffrey M., and David J. Larsen. Enoch, Noah, and the Tower of Babel. In God’s Image and Likeness 2. Salt Lake City, UT: The Interpreter Foundation and Eborn Books, 2014, pp. 46–47.

Mitton, George L. "The Book of Mormon as a resurrected book and a type of Christ." In Remembrance and Return: Essays in Honor of Louis C. Midgley, edited by Ted Vaggalis and Daniel C. Peterson, 121-46. Orem and Salt Lake City, UT: The Interpreter Foundation and Eborn Books, 2020.

The book of remembrance mentioned in the Book of Moses seems to have been passed down to the righteous descendants of Adam. For example, Moses 6:3–5 prefaces its description of the keeping of “a book of remembrance … in the language of Adam” with a mention of the births of Seth and Enos, who called “upon the name of the Lord” and “it was given unto as many as called upon God to write by the spirit of inspiration.” This passage recalls a fragmentary text from Qumran that has been given the title “The Secret of the Way Things Are” (4Q415-418, 1Q26, 4Q423). It likewise preserves a tradition that a “book of remembrance” was successively bequeathed to Seth and Enos “with a spiritual people” (M. Wise et al., DSS, 4Q417 Fragment 1, column 1, lines 13–17, p. 484). Though Jewish pseudepigrapha, Josephus, and Christian gnostic writings all mention Seth in connection with this tradition, it is rarer to find it associated with both Seth and Enosh. Thanks to David Snell for pointing out this reference.

[33] D. C. Allison, Testament, 10:1, 6-7, 11, p. 254. See also Pseudo-Titus, De dispositione sanctimonii (ed. De Bruyne): “From among the earliest people Enoch the righteous was appointed to write down the deeds of the first humans”; Ms. Monacensi 287 fol. 59 (ed. Boll): “Enoch—the seventh after Adam—recorded the coming wrathful judgment of God … on stone tablets”—both sources as cited in J. C. Reeves et al., Enoch from Antiquity 1, pp. 92, 93. Likewise, in the Testament of the Twelve Patriarchs, Dan, the son of Jacob-Israel, finds the record of the wickedness of the sons of Levi in the book of Enoch (H. C. Kee, Testaments, Dan 5:6, p. 809): “I read in the Book of Enoch the Righteous that your prince is Satan and that all the spirits of sexual promiscuity and of arrogance … cause them to commit sin before the Lord.” See also ibid., Simeon 5:4, p. 786: “For I have seen in a copy of the book of Enoch that your sons will be ruined by promiscuity”; ibid., Naphtali 4:1, p. 812: “I have read in the writing of holy Enoch that you will stray from the Lord, living in accord with every wickedness of the gentiles and committing every lawlessness of Sodom”; ibid., Benjamin 9:1, p. 827: “From the words of Enoch the Righteous I tell you that you will be sexually promiscuous like the promiscuity of the Sodomites.” For a general overview of the heavenly book of deeds in second temple literature, see L. Baynes, Heavenly Book, pp. 85–105.