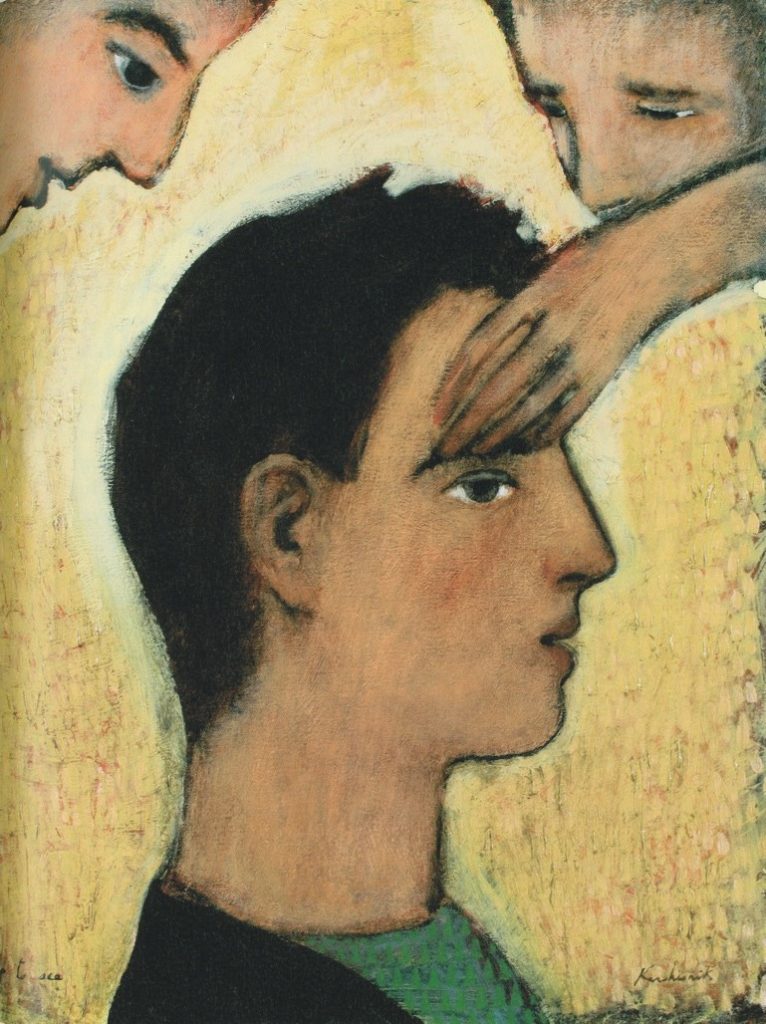 The Opening of Enoch’s Mouth

When the Lord called Enoch as a prophet, Enoch was concerned about his ability to adequately preach to the people. In particular, he described himself as being “slow of speech.”[2] Moses may have been quoting Enoch when, after receiving his own prophetic calling, he told the Lord he was “slow of speech, and of a slow tongue”[3]—literally, in Hebrew idiom, “heavy of mouth and heavy of tongue.”[4]

In Moses’ case, as with Ezekiel, the problem was most likely not a physical speech impediment,[5] but rather doubts about his fluency in the native language of his hearers.[6] What language would that be? Not Egyptian, of course, because Moses had been raised in Egypt[7] and during his first appearance at Pharaoh’s court both he and Aaron did the speaking.[8] Rather, as Richard E. Friedman argues, Moses more likely had difficulty with Hebrew. Friedman observes that “God’s response in fact confirms that the problem for Moses was speaking ‘to the people,’[9] not to the Egyptians.”[10]

Could Enoch have been in a similar predicament? After all, he was not sent to preach repentance to his own people (who presumably spoke his own language), but rather to the people in the eastern land where his journey had taken him.[11] Whatever the case, non-canonical Enoch sources seem to corroborate that Enoch had speech challenges. Some accounts, for example, portray Enoch as having been “deliberate in his speech” and “often silent.”[12]

These descriptions are notable because being “slow of speech” is not a common motif among biblical prophets. Only Moses and Enoch are specifically described in this manner. It is also curious that in the cases of both Enoch and Moses, “it is the stammerer whose task it is to bring down God’s word to the human world.”[13] “Whatever the circumstances, the underlying idea is that prophetic eloquence is not a native talent but a divine endowment granted for a special purpose, the message originating with God and not with the prophet.”[14]

Although God provided Aaron as a spokesman for Moses, He offered no such relief to Enoch. Instead, He gave Enoch himself “the power of … language”[15]—a term that is found nowhere else in scripture. By this power and at his “command” in speaking “the word of the Lord, … the earth trembled, and the mountains fled, … and the rivers of water were turned out of their course; and the roar of the lions was heard out of the wilderness,” causing “all nations [to fear] greatly.”[16]

The wording of God’s promise to Enoch is also significant:[17] “Open thy mouth, and it shall be filled, and I will give thee utterance.” Again, the most obvious parallel is in the call of Moses, to whom the Lord declared: “I will be with thy mouth, and teach thee what thou shalt say.”[18] However, a similarly close parallel is found in pseudepigraphal Enoch literature. In 2 Enoch 39:5, Enoch states: “… it is not from my own lips that I am reporting to you today, but from the lips of the Lord I have been sent to you. For you hear my words, out of my lips, a human being created exactly equal to yourselves; but I have heard from the fiery lips of the Lord.”[19] 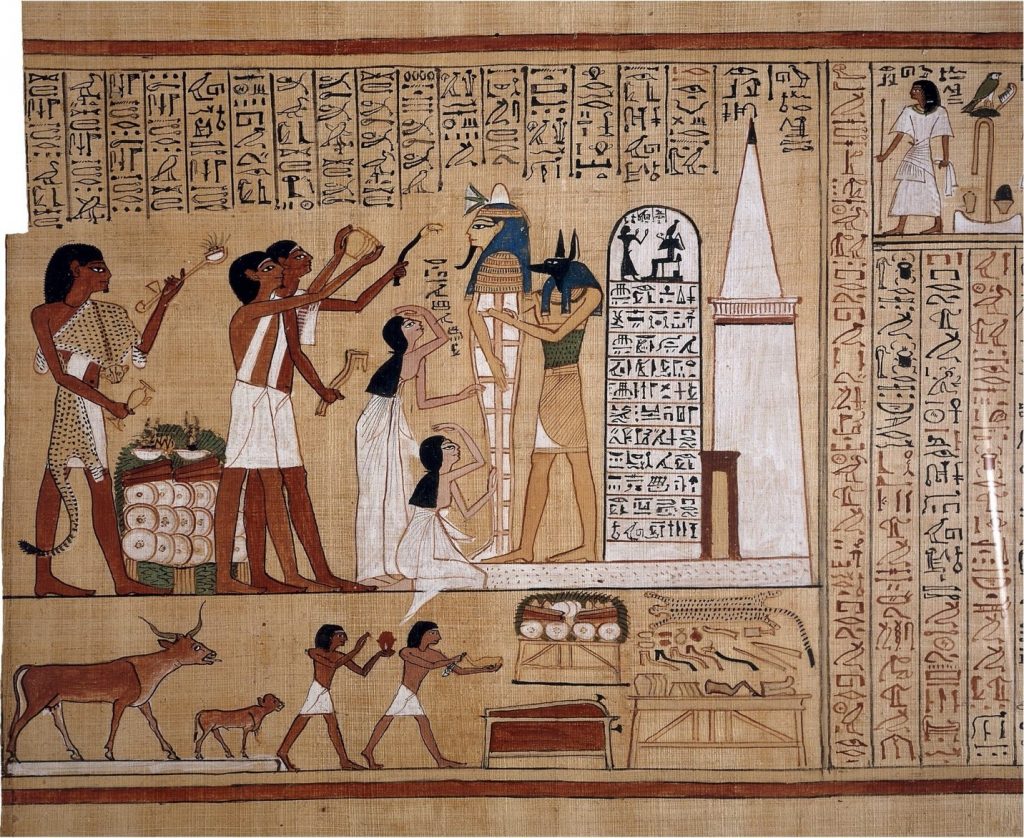 Priests of the Egyptian god Anubis, the guide of the dead and the god of tombs and embalming, perform the opening of the mouth ritual, ca. 1275 BCE[20]

Commenting on Old Testament language that mentions the enabling of a prophet’s “lips,” “tongue,” and “mouth,” biblical scholar Carol Meyers found meaningful “parallels in the empowering ‘opening the mouth’ rituals in ancient Near Eastern texts, especially Egyptian ones.”[21] Hugh Nibley recalled that “one purpose of the Egyptian Opening of the Mouth is to cause the initiate ‘to remember what he had forgotten—that it is to awaken the mind to its full potential in the manner of the awakening of Adam in a new world.”[22] By rites of this sort, the mouth is also sanctified[23] and becomes a conduit for the transmission of heavenly things.

The rite is called the Opening of the Mouth because that must come first, that being the organ by which one may breathe, receive nourishment, and speak. … So the mouth comes first; but to rise above mere vegetation, life must become conscious and aware, so that the opening of the eyes immediately follows.

The Opening of Enoch’s Eyes

Moses 6:35–36 recounts the anointing, washing, and “opening” of Enoch’s eyes:

35 And the Lord spake unto Enoch, and said unto him: Anoint thine eyes with clay, and wash them, and thou shalt see.[25] And he did so.

36 And he beheld the spirits that God had created; and he beheld also things which were not visible to the natural eye; and from thenceforth came the saying abroad in the land: A seer hath the Lord raised up unto his people.

Descriptions of Enoch’s visions or tours of the heavenly worlds appear frequently in pseudepigraphal texts. Though Enoch’s account in the Book of Moses focuses more on salvation history than on the fantastic celestial realms so prominent in other accounts, it is notable that what few details are given us in the Book of Moses often line up quite well with non-canonical accounts of his visions. For example, the Book of Moses prominently highlights Enoch’s ability to see “things which were not visible to the natural eye,” consistent with the Lord’s command in 2 Enoch for him to make a “record of all His creation, visible and invisible”[26] and of his having seen God make “invisible things descend visibly.”[27] Another account tells of how Enoch “trained” himself to see divine visions of invisible things while “in his normal (i.e., bodily) state.”[28]

As a sign of their prophetic calling, the lips of Isaiah[29] and Jeremiah[30] were touched to prepare them for their roles as divine spokesmen. However, in the case of both the book of Moses and the pseudepigrapha, Enoch’s eyes “were opened by God”[31] to enable “the vision of the Holy One and of heaven.”[32] The words of a divinely given song recorded in Joseph Smith’s Revelation Book 2 are in remarkable agreement with 1 Enoch:[33]

This divine action would have had special meaning to Joseph Smith, who alluded elsewhere to instances in which God touched his eyes before the heavens were opened to him.[34]

The description of the anointing of the eyes with clay in the Book of Moses recalls the healing by Jesus of the man born blind.[35] And, indeed, it may be that Jesus’ actions were meant, at least in part, to allude to the experience of Enoch. Further elucidating the meaning of this action, Craig Keener[36] observed that “by making clay of the spittle[37] and applying it to eyes blind from birth, Jesus symbolically repeated the creative act of Genesis 2:7.”[38] Interestingly, in the Book of Moses, the first thing Enoch sees after having his eyes anointed with clay are the “spirits that God had created.”[39]

This article was adapted and expanded from Bradshaw, Jeffrey M., and David J. Larsen. Enoch, Noah, and the Tower of Babel. In God’s Image and Likeness 2. Salt Lake City, UT: The Interpreter Foundation and Eborn Books, 2014, pp. 36, 39-41.

Glazov, Gregory Y. Bridling of the Tongue and the Opening of the Mouth in Biblical Prophecy. JSOTS 311. Sheffield, England: Sheffield Academic Press, 2001.

Magness, Jodi. “The impurity of oil and spit among the Qumran sectarians.” In With Letters of Light: Studies in the Dead Sea Scrolls, Early Jewish Apocalypticism, Magic, and Mysticism, edited by Daphna V. Arbel and Andrei A. Orlov. Ekstasis: Religious Experience from Antiquity to the Middle Ages, ed. John R. Levison, 223-31. Berlin, Germany: Walter de Gruyter, 2011.