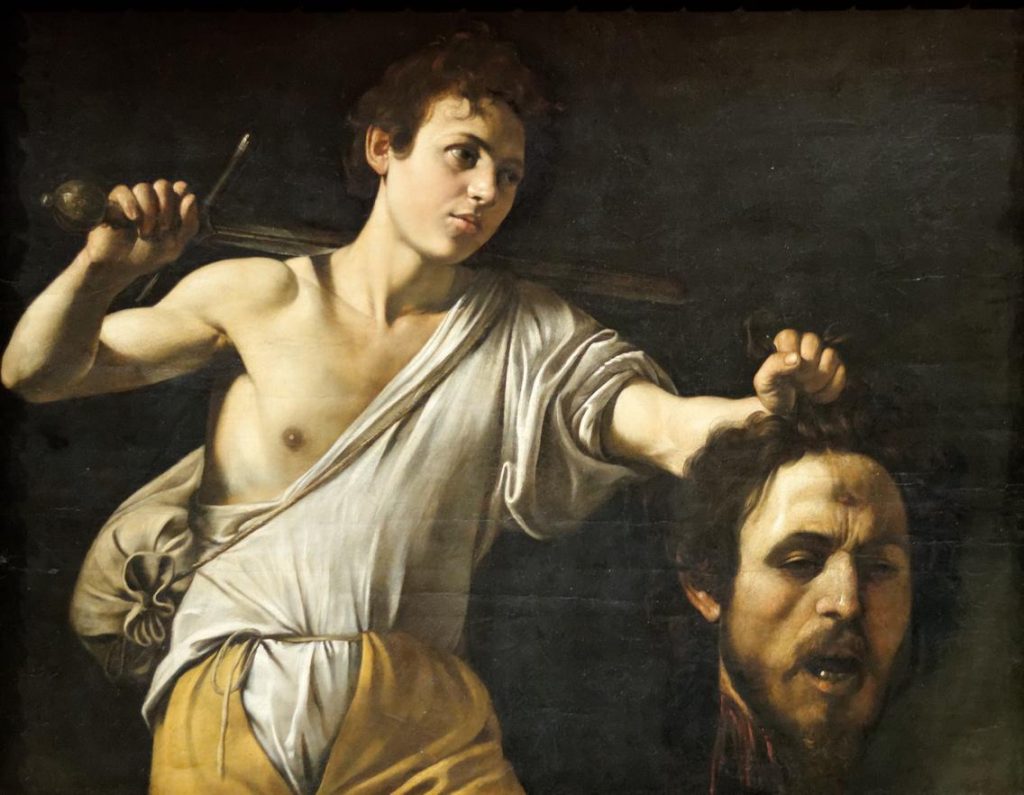 Michelangelo Merisi da Caravaggio (Le Carvage), 1571–1610: David with the Head of Goliath, 1607.[1] Examples have been found of ancient authors applying the term na’ar (Hebrew “lad” or “youth”) to both David and Enoch,[2] as well as to exalted figures such as Adam, Melchizedek and Jesus Christ.[3]

Readers of the Book of Moses have often puzzled over Enoch’s self-description as a “lad” (Moses 6:31), especially in light of the fact that he was at least sixty-five years old at the time (v. 25). Strikingly, this is the only instance of the term “lad” in the teachings and revelations of Joseph Smith. Hugh Nibley was the first to recognize the significance of the use of this term in the Book of Moses, given the prominence of “lad” (or the equivalent term “youth”) as a name for Enoch in several Jewish mystical works,[4] notably including the pseudepigraphal books of 2 Enoch and 3 Enoch.[5] 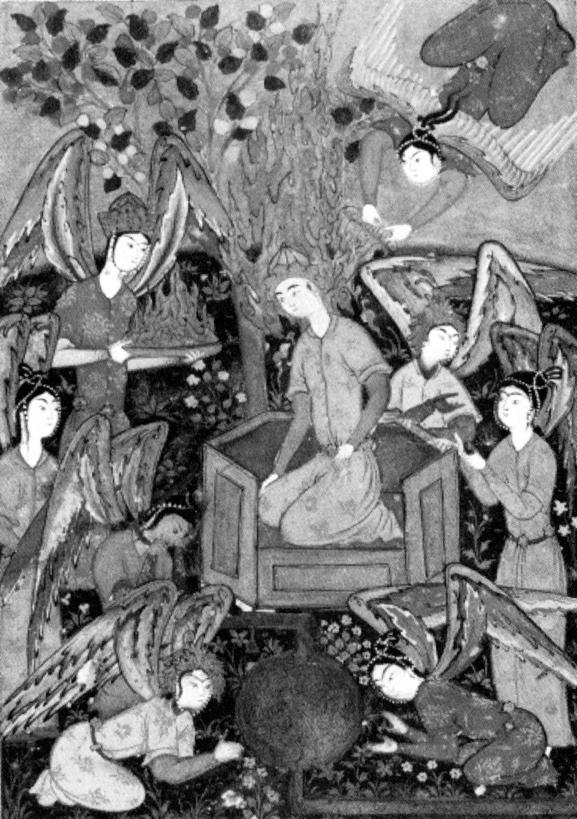 Adam enthroned, the angels prostrating themselves before him, 1576.[6] In pseudepigraphal accounts, Enoch is said to have experienced angelic resistance to his exaltation, similar to the resistance faced by Adam.

Enoch uses the term “lad” in a somewhat self-denigrating way in Moses 6:31: “Why is it that I have found favor in thy sight, and am but a lad … ?” The angels in 3 Enoch similarly look upon Enoch’s status as a “lad” with disdain. They see Enoch’s relative youth as reason to challenge the legitimacy of his heavenly ascent as well as his right to sponsor the ascent of his pupil, Rabbi Ishmael.[7] Enoch is portrayed “as a sort of Johnny-come lately who despite his late arrival manages to become the greatest in their midst.”[8] This recalls the pre-rabbinic tradition of the initial reluctance of the angels to pay homage to Adam, who himself was seen as a young newcomer to the divine realm.[9]

Gary A. Anderson of the University of Notre Dame wonders at the ancient references to Enoch as a “lad”:[10]

The acclamation of Enoch as “lad” is curious. It certainly recalls the question that began the story: “Why are you called ‘lad’ by [those] in the heights of heaven?”[11] It is worth noting that of all the names given Enoch, the title “lad” is singled out as being particularly apt and fitting by the heavenly host. Evidently the seventy names were of a more general order of knowledge than the specific title “lad.”

In answer to the question of why “the seventy nations of the world” called Enoch by his other names while God preferred to call him by the name of “lad,”[12] Andrei Orlov proposes that Enoch served as a sort of mediator between the nations and God, with the reference to his seventy names corresponding to the seventy nations of the world.[13] In short, to the nations, he was a ruler, the “Prince of the World,”[14] while to God he was a subordinate, a “lad” by comparison.[15]

Searching for the answer in another direction, Gershom Scholem, followed by other scholars, noticed that the title “lad” appears in the ancient Jewish literature in connection with the role of one who serves “before the heavenly throne and [ministers] to its needs” or as one who serves “in his own special tabernacle.”[16]

A third explanation is found in the Zohar and related writings. There it is understood that Enoch “became a youth” permanently when “God took him” to live forever in the heavenly world.[17]

While none of these explanations is without its merits, Anderson prefers the reason that Enoch himself gives for this title, as recorded in the book of 3 Enoch :[18]

And because I was the youngest among them and a “lad” amongst them with respect to days, months, and years, therefore they called me “lad.”

Though “most scholars have not been satisfied with the simple and somewhat naïve answer the text supplies”[19] and have instead formulated a variety of more elaborate hypotheses for the name, Enoch’s explanation for his title of “lad” in the Book of Moses fits the “simple and straightforward” explanation given in 3 Enoch.

This article was adapted and expanded from Bradshaw, Jeffrey M., and David J. Larsen. Enoch, Noah, and the Tower of Babel. In God’s Image and Likeness 2. Salt Lake City, UT: The Interpreter Foundation and Eborn Books, 2014, pp. 37–39.

Anderson, Gary A. "The exaltation of Adam." In Literature on Adam and Eve: Collected Essays, edited by Gary A. Anderson, Michael E. Stone and Johannes Tromp, 83-110. Leiden, Netherlands: Brill, 2000.

Eaton, John H. The Psalms: A Historical and Spiritual Commentary with an Introduction and New Translation. London, England: T&T Clark, 2003.

[2] In a prophecy “of old” that is later applied to David we read: “I have set a youth above the warrior; I have [exalted] a young man over the people” (translation as found in J. H. Eaton, Psalms Commentary, 89:19, p. 317 with the substitution of the word “exalted.”).

The youth who is set above the warrior (Hebrew gibbor) recalls Enoch’s victory over the gibborim in the Book of the Giants and in the book of Moses (as well as David’s youthful triumph over the giant Goliath). Of course the motif of the exaltation of the anointed one is relevant to the stories of Enoch’s heavenly ascent in the book of Moses and in the pseudepigrapha. For a summary of other ancient traditions relating to resentment of the exaltation of the younger rival over the older one, see J. M. Bradshaw, God’s Image 1, pp. 225, 540–541, 582–583.

[16] G. Scholem, Kabbalah, p. 379. A related argument for this idea might be found in the Book of Mormon. According to Matthew Bowen, “the best explanation for the name Alma is that it derives from the Semitic term ǵlm (Hebrew ʿelem) — ‘young man,’ ‘youth,’ ‘lad.’ This strongly suggests the possibility of an intentional wordplay on the name Alma in the Book of Mormon’s underlying text: Alma became ‘[God’s] young man’ or ‘servant’” (M. L. Bowen, Introduction, p. lii. See M. L. Bowen, Young Man, pp. 91–94 for Bowen’s complete discussion).

Metatron is often described as a na’ar, “youth, lad, servant.” Here the author alludes to the identification of Enoch with Metatron by citing the statement from Proverbs … “Train the youth”, which is understood to mean that Enoch was transformed … into the youth, i.e., Metatron.

As it is written (in Scripture): “And he was no more, because God took him” (Genesis 5:24): “and he was no more” signifies “in this world”; “and he was no more” means “as he existed in this world.” Because God took him” means “(he became) another image”; in that (world) he is permanently a youth. This secret we found (in the verse): “Enoch became a youth following His way” (Proverbs 22:6) (so as) to conduct all the worlds.” “even should he grow old, he will not deviate from it” (Proverbs 22:6): Behold, he is permanently found in it, and he reverted to a youth. In Enoch is contained the form of the hidden world. He is the throne of his Lord. He was made (one of the messengers) for the world. When the world is (under the attribute) of judgment, Metatron goes forth and is called “the leader over all the celestial armies.” The old man who is a youth goes from one world to another, and the anger subsides.