The Hilt Thereof Was of Pure Gold

Finding Laban drunk in the streets of Jerusalem, Nephi “beheld his sword, and [he] I drew it forth from the sheath thereof; and the hilt thereof was of pure gold, and the workmanship thereof was exceedingly fine, and . . . the blade thereof was of the most precious steel” (1 Nephi 4:9). ((The golden hilt of Laban’s sword has led a number of people to suggest that this was a special sword, a symbol of office.)) This description is so precise that one is tempted to look for similar weapons from the ancient world in which Laban lived. Comparisons have been made with a long dagger found in the tomb of the fourteenth-century BC Egyptian king Tutankhamun, with its iron blade and hilt of gold, uncovered in 1922 by British archaeologist Howard Carter (see Fig. A). ((Note also the discovery of a Canaanite dagger with a silver-plated handle (Fig. B).)) This comparison is valid insofar as the workmanship is concerned, for Laban’s sword had a steel blade and a gold hilt. But the Egyptian weapon would not have been long enough for Nephi to strike off Laban’s head (1 Nephi 4:18). ((See the discussion in William J. Adams, Jr., “Nephi’s Jerusalem and Laban’s Sword,” Journal of Book of Mormon Studies 2/2 (1993), 194-95, reprinted in Pressing Forward With the Book of Mormon, eds. John W. Welch and Melvin J. Thorne (Provo: FARMS, 1999), 11-13.))

Gold-hilted swords have been known from both Europe and Asia, but were they known in the region of ancient Israel, where Nephi and Laban lived? The answer is yes. Such weapons are known from the Near East and other places in the eastern Mediterranean, from both ancient texts and archaeological  finds. Weapons made of precious metals are mentioned in tablets found in 1975, during excavations of the ancient northwest Syrian city of Ebla (2600–2500 BC), where we read of gold daggers, a silver‑bladed dagger, and silver bows (TM.75.G.1599 obverse III.2–4, VI.3–7, VII.1–3; TM.75.G.2070 obverse VIII.17). ((English translations of the tablets were published in Giovanni Pettinato, The Archives of Ebla: An Empire Inscribed in Clay (Garden City, NY: Doubleday & Co., 1981). The modern Arabic name of the site is Tell Mardikh.))

Ancient swords that share some features with Laban’s weapon are mentioned in the Iliad, the Greek epic of the Trojan war. ((John A. Tvedtnes, “The Iliad and the Book of Mormon,” Journal of Book of Mormon Studies 4/2 (Spring 1996): 147-149, reprinted in, Pressing Forward With the Book of Mormon,)) Though its author, Homer, probably lived about 800 BC, the date of the war itself is generally acknowledged to be around 1200 B.C. Consequently, Homer’s description of weapons and battle tactics can be said to be authentic for at least 800 BC and perhaps earlier.

We can draw a further comparison of Laban’s swords with those mentioned in one of the Dead Sea Scrolls. ((John A. Tvedtnes, “The Workmanship Thereof Was Exceedingly Fine,” Journal of Book of Mormon Studies 6/1 (1997), 73-75.)) War Scroll (1QM) 5.11-14 describes the swords to be used by the Israelites during the final battle between the forces of good and evil:

The swords shall be of purified iron, refined in a crucible and whitened like a mirror, work of a skilful craftsman; and it will have shapes of an ear of wheat, of pure gold, encrusted in it on both sides. And it will have two straight channels right to the tip, two on each side. Length of the sword: one cubit and a half [about 27 inches]. And its width: four fingers [about 2 inches]. The scabbard will be four thumbs; it will have four palms up to the scabbard and diagonally, the scabbard from one part to the other (will be) five palms. The hilt of the sword will be of select horn, craftwork, with a pattern in many colours: gold, silver and precious stones. ((Florentino García Martínez, The Dead Sea Scrolls Translated (2nd ed., Leiden: Brill, 1996), 99.))

The fact that this text and that of the Book of Mormon mention the gold hilt and the sheath or scabbard of the sword is relatively insignificant. More important is the composition of the hilt and the blade. Laban’s sword blade is made of “the most precious steel,” while the future swords of the Israelite army are to have blades “of purified iron . . . whitened like a mirror.” Nephi describes the hilt of Laban’s sword as being made “of pure gold.” The future Israelite swords will have a hilt “of select horn . . . with a pattern in many colours: gold, silver and precious stones,” though designs in “pure gold” are also mentioned. Both descriptions refer to the “workmanship” or “craftwork” of the swords, saying it was “exceedingly fine” or “of a skilful craftsman.” The War Scroll is particularly detailed when it describes the sword’s ornamentation and size. The idealized Israelite sword described in the War Scroll may reflect the concept of precious swords carried by earlier Israelite leaders such as Laban and perhaps even the kings.

The oldest known swords, forged around 3300-3000 BC, were found at Arslan Tepe in the Taurus mountains of southeastern Anatolia in Turkey. ((A. Palmieri, “Excavations at Arslantepe (Malatya),” Anatolian Studies 31 (1981):  101-119, 1981)) Nine swords, ranging in length from 45 to 60 centimeters [18-24 inches], were found in a palace complex and were made from an arsenic-copper alloy. Three of them were beautifully inlaid with silver (Fig. C). Another sword was found in a royal tomb built just after the destruction of the palace.

A similar cache of weapons is said to have been found in the royal treasure at the site of Dorak in northwestern Anatolia, near the Sea of Marmara.  Dating from about 2500 B.C., the cache included a number of swords, of which we have only rubbings prepared by British archaeologist James Melaart, who said he was shown the originals by a Turkish woman who possessed them. Of the bronze swords, one has an ivory hilt with a design formed by red fillings, another a gold hilt decorated with carnelian studs, a third a stained ivory handle covered with gold and a pommel of rock-crystal, a fourth a lion-head pommel of rock-crystal with eyes of lapis lazuli, and a fourth a gold hilt decorated with dolphins and a lapis lazuli pommel. An iron sword from the cache has an obsidian pommel and a hilt studded with gold and amber.  Two of the swords have silver blades. One of these has a gold central spine on the blade and a lion-head pommel of pale blue stone with nephrite rivets, while the other has boat engravings on the blade and a silver hilt decorated with gold dolphins.

Two gold swords from the same time period as the Dorak finds were uncovered during excavations at the the Royal Cemetery in Ur, a city of southern Mesopotamia (Iraq). One has a blade and lower portion of the hilt made of gold, while the upper portion of the hilt and pommel are comprised of a carved white stone with gold bead inlay for decoration. The other has a blade of gold, while the hilt has gold bead inlay. Of particular interest is that this sword was found with its sheath intact. The sheath is of gold-decorated open-work and has two vertical slits on the back to allow it to be attached to a belt. (Figs. D-F)

From the region of the Aegean Sea, which separates Greece from Turkey, we have many finds from the Minoan civilization (2700 to 1450 BC) centered in Crete and the Mycenaean civilization (1600–1100 BC), most famous for the Trojan War  between various Greek city-states and the city of Troy. Several gold-hilted swords and daggers have been uncovered in this region (Figs. G-J).

Other nations from Lehi’s time (ca. 600 BC) also had swords with gold hilts. These included Assyria, which fell to the Babylonians in 605 BC Fig. K);  Persia, which conquered Babylon in 539 BC (Fig. L); the Medes, who joined with the Persians in the conquest of Babylon (Fig. M), and the Scythians, who migrated from Russia and Afghanistan to the Near East as far south as northern Israel in the 7th century BC (Figs. N-O). ((A. Palmieri, “Excavations at Arslantepe (Malatya),” Anatolian Studies 31 (1981):  101-119, 1981)) Later Mediterranean peoples, notably the Greeks and Romans, also decorated swords with gold. Various examples of swords resembling the one taken from Laban by Nephi were found after Joseph Smith’s time, yet the Book of Mormon testifies of a gold-hilted sword when such were as yet unattested in the biblical world before the age of modern archaeology. 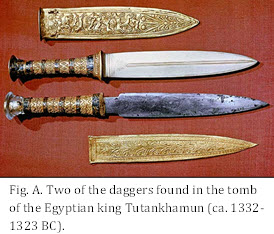 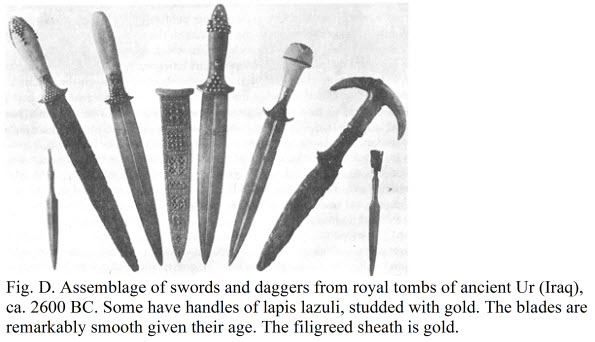 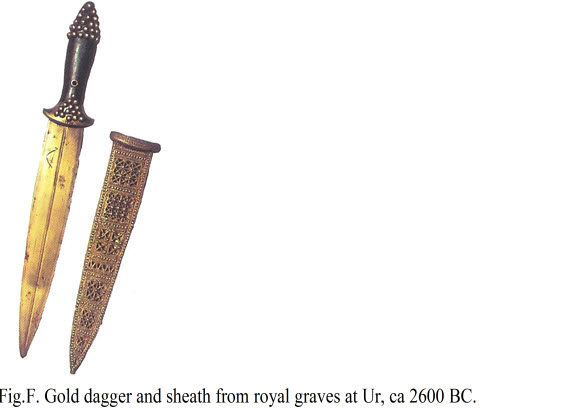 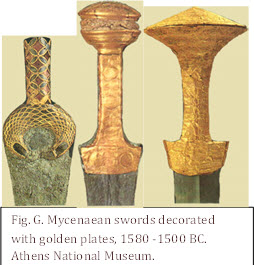 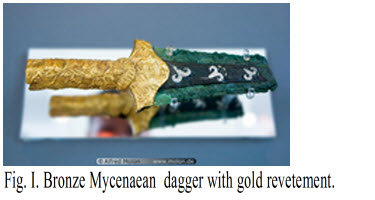 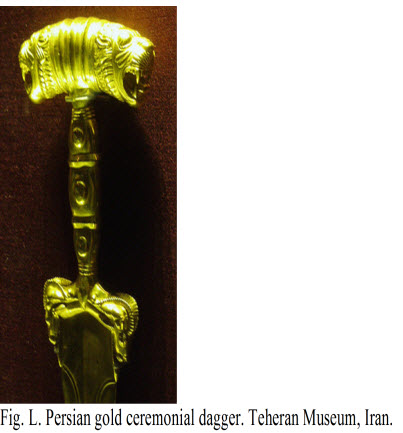 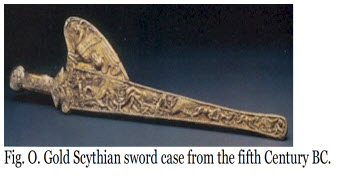 About John A. Tvedtnes

John A. Tvedtnes earned degrees in anthropology, Middle East area studies, linguistics, and Hebrew, and studied Egyptian and Semitic languages at the Hebrew University in Jerusalem. He taught at the University of Utah, the BYU Salt Lake and Jerusalem centers before joining the Foundation for Ancient Research and Mormon Studies, which became BYU’s Neal A. Maxwell Institute for Religious Scholarship. John has lectured at several other universities and has presented dozens of symposium papers in Israel and the USA. Though most of his ten books and 300+ articles address LDS subjects, his writings have been published by four universities and several professional societies. John retired in 2007 as senior resident scholar for BYU's Neal A. Maxwell Institute for Religious Scholarship.
View all papers by John A. Tvedtnes →