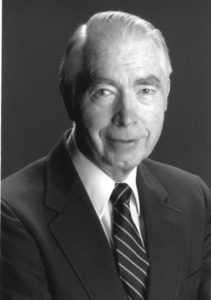 I received the sad news this morning that Richard Lloyd Anderson, a quiet and modest giant among Latter-day Saint scholars and one of the great defenders of Joseph Smith and the claims of the Restored Gospel in this dispensation, passed away late Sunday night. Richard was well into his nineties, and, even amidst my recent travels, I had heard suggestions that his health had taken a turn for the worse, so I knew that he could not stay much longer.

Richard was and is a gentle, kind, and self-effacing man who dedicated much of his life to meticulous scholarship, coupled with a deep commitment to his faith. I think it only just to say that he was not merely respected by many, but beloved of many.

I include here a column that I wrote for the Deseret News back in March of 2010:

Serious critics of the Book of Mormon must neutralize the testimonies of the witnesses to the Golden Plates.

This, however, is not easy. (It may be impossible.) Largely thanks to the meticulous research of professor Richard Lloyd Anderson, we know a great deal about them and about the six decades, both when they were dedicated followers of Joseph Smith and after they had been alienated from him and his church for many years, during which they testified to the Book of Mormon. For a very long time, those seeking to discredit their testimony accused them of insanity, or of having conspired to commit fraud. In the light of Anderson’s work, however, neither accusation can be sustained. They were plainly sane, honest, reputable men.

Recently, the preferred method of disposing of the witnesses has been to suggest — quite falsely — that they never claimed to have literally seen or touched anything at all, or to insinuate that they were primitive and superstitious fanatics who, unlike us sophisticated moderns, could scarcely distinguish reality from fantasy. Honest, but misguided.

It seems implausible, though, to assume that the witnesses, early 19th-century farmers who spent their lives rising at sunrise, pulling up stumps, clearing rocks, plowing fields, sowing seeds, carefully nurturing crops, herding livestock, milking cows, digging wells, building cabins, raising barns, harvesting food, bartering (in an often cashless economy) for what they could not produce themselves, wearing clothes made from plant fibers and skins, anxiously watching the seasons, and walking or riding animals out under the weather until they retired to their beds shortly after sunset in “a world lit only by fire,” were estranged from everyday reality.

It’s especially unbelievable when the claim is made by people whose lives, like mine, consist to a large extent of staring at digital screens in artificially air-conditioned and artificially lit homes and offices, clothed in synthetic fibers, commuting between the two in enclosed and air-conditioned mechanical vehicles while they listen to the radio, chat on their cell phones, and fiddle with their iPods (whose inner workings are largely mysterious to them), who buy their prepackaged food (with little or no regard for the time or the season) by means of plastic cards and electronic financial transfers from artificially illuminated and air-conditioned supermarkets enmeshed in international distribution networks of which they know virtually nothing, the rhythms of whose daily lives are largely unaffected by the rising and setting of the sun. Somehow, the current generation seems ill-positioned to accuse the witnesses’ generation of being out of touch with reality.

I suppose that “hallucination” might strike a skeptic as an attractive way to defang the testimony of the Three Witnesses, with its divine voice and its angelophany and its clearly visionary flavor. But the experience of the Eight Witnesses is very different, and entirely matter-of-fact. Hallucination doesn’t seem to account for it well at all.

On the other hand, if it weren’t for the spectacularly supernatural character of the experience of the Three Witnesses, a desperate skeptic might be able to dismiss the whole thing as the product, merely, of crude deception. Perhaps Joseph Smith or some other brawny frontier blacksmith (Oliver Cowdery, perhaps?) forged golden stage props with which to fool the yokels. After all, the two tiny sets of inscribed metal plates that James Jesse Strang, would-be successor to Joseph Smith, “found” in Wisconsin and Michigan between 1845 and 1849 and subsequently “translated” certainly existed, and were almost certainly frauds. (One of Strang’s witnesses later testified to having helped manufacture them.) But Strang summoned no angels for public viewing, and no voice of God endorsed his “Book of the Law of the Lord.”

Even Latter-day Saints may not appreciate the strength of the witness testimonies. Fortunately, though, Anderson, trained in both legal reasoning at Harvard Law School and historical method through a doctorate at Berkeley, has devoted a lifetime to demonstrating the solidity of the evidence they provide. In his classic volume “Investigating the Book of Mormon Witnesses”[1] — described by one of my BYU colleagues, not unreasonably, as “next to the scriptures themselves, the most faith-promoting book (he had) ever read”— and in later studies (two of which are available on the Web site of Brigham Young University’s Neal A. Maxwell Institute for Religious Scholarship[2]), he has set out a deeply impressive case. I earnestly commend his work to those unfamiliar with it.

Richard’s contributions extended well beyond the Witnesses, of course — not least among them the authorship, while serving as a missionary, of what I think was the Church’s first uniform plan for teaching investigators of the Gospel. His publications included an emphasis on the New Testament, and especially on the apostle Paul. His doctoral dissertation focused, if I recall correctly, on the fourth-century Roman soldier and historian Ammianus Marcellinus, and, for a while, he taught Greek. But he will be principally remembered among Latter-day Saints generally, I think, for his remarkable devotion to the study of the Book of Mormon Witnesses

I’m pleased to note that, in furtherance of the film that the Interpreter Foundation has undertaken to produce regarding those Witnesses, we interviewed Richard Anderson for two days last year.

It’s now clear to whom the film will be dedicated.

[1] Available at Amazon in hardback, paperback and Kindle formats.

[2] Book of Mormon Witnesses and Attempts to Redefine the Experience of the Eight Witnesses.

Daniel C. Peterson (PhD, University of California at Los Angeles) is a professor emeritus of Islamic studies and Arabic at Brigham Young University, where he founded the University’s Middle Eastern Texts Initiative. He has published and spoken extensively on both Islamic and Latter-day Saint subjects. Formerly chairman of the board of the Foundation for Ancient Research and Mormon Studies (FARMS) and an officer, editor, and author for its successor organization, the Neal A. Maxwell Institute for Religious Scholarship, his professional work as an Arabist focuses on the Qur’an and on Islamic philosophical theology. He is the author, among other things, of a biography entitled Muhammad: Prophet of God (Eerdmans, 2007).
View all papers by Daniel C. Peterson →