The Yale edition of the Book of Mormon is now in its fifth printing, which means that we have exceeded 10,000 copies and going upward. A number of people have been asking me when will this fifth (corrected!) printed appear. Well, it appeared in April and Yale UP didn’t even tell me.

This printing is significant in that it includes the textual changes that I discussed in the second edition of Analysis of Textual Variants of the Book of Mormon, published in 2017. Yes, it took this long to get the changes into the Yale edition. 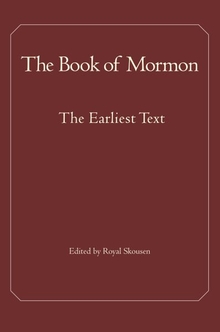 In 2009, I published The Book of Mormon: The Earliest Text with Yale University Press. The text of this edition was based on the first edition of volume 4 of the Book of Mormon critical text project, namely, the six parts of Analysis of Textual Variants of the Book of Mormon, with each part published one year at a time, from 2004 through 2009. The purpose of the Yale text is to give the reader the original text of the Book of Mormon, to the extent that it can be determined. The text is also presented in sense-lines, not in paragraphs or verse blocks, so that the lines break at the end of phrases and clauses, thus facilitating the reading of the text as well as replicating how Joseph Smith would have dictated the text to his scribes.

The original printing of the Yale edition turned out to have a number of errors, so the next year, when the second printing was published, I removed one egregious typo and made minor corrections for 11 passages in the accidentals (that is, in the punctuation, capitalization, line breaks, and paragraphing). The next two printings, the third and the fourth, made no additional changes to the text. But this spring the fifth printing has been published, and in it I have made seven substantive changes in the reading of the text as well as 36 changes in the accidentals. These changes are based on the second, revised edition of the six-part Analysis of Textual Variants of the Book of Mormon, published in 2017. In the fifth printing of the Yale edition of the Book of Mormon, I have finally been able to implement these changes into the official text.

Each of the seven substantive changes in the new fifth printing makes a significant change in how the words in the text read. Here I list each one, along with a brief discussion (see under each of these passages in the second edition of Analysis of Textual Variants for a fuller discussion):

Change had to hath in the fourth sense‑line of verse 20 and make the sentence into a question; this conjectural emendation was originally suggested by Sharon Jones:

For hath not the Lord been merciful
to shew unto me concerning them
even as he had prophets of old?

The earliest text (both the original and printer’s manuscripts as well as the 1830 edition) reads as a sentence fragment, a conditional clause without a main clause: “for had not the Lord been merciful to shew unto me concerning them even as he had prophets of old”. In my original write-up for this passage in Analysis of Textual Variants (in 2004), I argued that this fragment represented a Hebraism. Joseph Smith, in his editing for the 1837 edition, added a main clause to this conditional clause, namely, “I should have perished also”. But the more reasonable emendation is to simply replace had with hath. There is also an example from I Nephi 3:18 where Oliver Cowdery initially miswrote an original hath as had in the printer’s manuscript (which argues that the error here in 1 Nephi 19:20 could have happened).

Change upon to unto in the last sense-line in the verse; this conjectural emendation was originally proposed by Lyle Fletcher:

Know ye not that I the Lord your God have created all men
and that I remember they which are upon the isles of the sea
and that I rule in the heavens above and in the earth beneath
and I bring forth my word unto the children of men,
yea, even unto all the nations of the earth?

Make the last two sense‑lines into a single sense‑line and remove the punctuation; here the clause-initial but means ‘unless’ or ‘except’; this conjectural emendation was originally proposed by Monte Shelley:

And because that I have thus lied unto God,
I greatly fear lest my case shall be awful but I confess unto God.

Replace restore with the archaic reserve, the reading of the earliest extant text (the printer’s manuscript); Stanford Carmack argues that the original reading should be restored here since in Early Modern English the verb reserve had the meaning ‘to preserve (alive)’:

And thus we will reserve the flocks unto the king
and he will not slay us.

Orson Pratt, as editor for the 1849 LDS edition, replaced the original reserve with preserve, which correctly represents the archaic meaning of reserve, but is unnecessary since the critical text maintains the original archaic vocabulary throughout the Book of Mormon text.

Replace “to make an oath unto you” with “to take an oath unto you”, restoring the earliest extant reading in the text (the printer’s manuscript); Stanford Carmack argues that although this particular predicate phrase with the verb take does not occur in current English, it occurred fairly frequently in Early Modern English:

And we will not suffer ourselves to take an oath unto you
which we know that we shall break, and also our children.

I had originally suggested (in 2007) that “to take an oath unto you” in Alma 44:8 was an error influenced by the use of take in the following line of the original manuscript: “but take our weapons of war”. So here I reverse the conjectural emendation I originally made in the first edition of Analysis of Textual Variants.

Change the punctuation and sense‑line breaks in the first part of this verse; the word art is the second person singular of the be verb, not the noun art; this conjectural emendation was first proposed by Lyle Fletcher:

Yea, and we may see at the very time when he doth prosper his people
– yea, in the increase of their fields, their flocks and their herds,
and in gold and in silver
and in all manner of precious things of every kind –

Here the current LDS text, following the 1830 reading, treats “every kind and art” as a conjoined noun phrase. But this kind of usage is never found anywhere else in the text. Yet it is interesting to note that the original text has instances of “and art” followed by the present-participial form of a verb; in these cases, art is a form of the be verb, despite its nonstandard usage (we expect art to occur with the subject pronoun thou, but in these examples the subject is a third-person singular):

And it is this form that we also apparently have here in Helaman 12:2: “and art sparing their lives” (rather than “every kind and art”). The use of “and art” followed by the present-participial verb form, when conjoined with a third-person singular subject, is intentional, even though it is clearly nonstandard.

Add spaces to the word nevertheless since here the phrase never the less takes on its original, now archaic, meaning, ‘not at all less’ or ‘in no way less’, dating from Early Modern English; the passage is contradictory if we retain the spelling as one word, nevertheless:

And Jesus saith unto them: Pray on.
Never the less they did not cease to pray.

In other words, the second clause means ‘and in no way less did they cease to pray’ (in this interpretation for modern English readers, I reverse the word order and remove the double negative).

A couple of observations are worth noting:

(1) Of these seven changes, only the last one was proposed by me, the editor. In all, there are suggested readings from four individuals: Sharon Jones (one emendation), Lyle Fletcher (one emendation and one re‑interpretation), Monte Shelley (one re-interpretation), and Stanford Carmack (two restorations). All of this shows the value of making a project open to input from the public, where others can send in suggested emendations to the editor and those suggestions will be taken seriously.

(2) Of these seven changes, four restore an archaic usage, one that was prevalent in Early Modern English: (a) clause-initial but with the meaning ‘unless’ or ‘except’ (Jacob 7:19); (b) restoration of the word reserve with its archaic meaning ‘preserve (alive)’ (Alma 17:31); (c) the acceptance of the archaic phrase “to take an oath (un)to someone” instead of the conjectured “to make an oath (un)to someone” (Alma 44:8); and (d) the original literal meaning of nevertheless, as three words never the less, with its meaning ‘in no way less’ (3 Nephi 19:6).

Further information is available on the Yale University Press website at https://yalebooks.yale.edu/book/9780300142181/book-mormon.