Free, Virtual Fireside with Susan Easton Black on the
Book of Mormon Witnesses 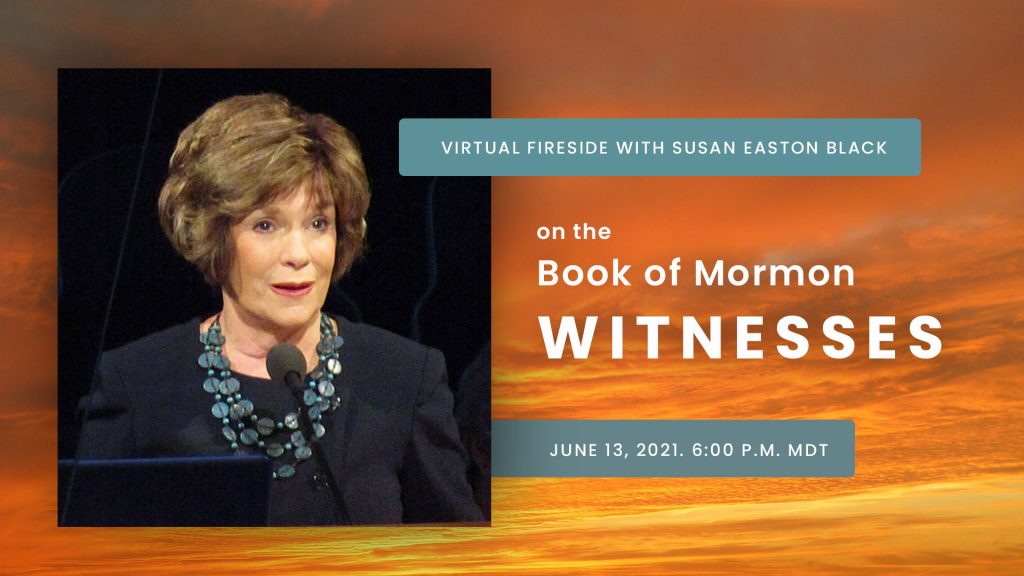 The Book of Mormon witnesses—Oliver Cowdery, Martin Harris, David Whitmer, and others—are important figures in Church History and they corroborate irreplaceable evidence for the truthfulness of the Book of Mormon. While many Latter-day Saints may be familiar with the origins of the Book of Mormon and the basic stories of the witnesses, their complex and under-represented lives have much to teach about faith and perserverance in the face of persecution and doubt.

Susan Easton Black taught Church History and Doctrine at BYU for 32 years. She was the first woman hired as a full-time faculty member in the College of Religious Education. She received the Karl G. Maeser Distinguished Faculty Award in 2000, the first woman at BYU to be so honored.

A popular speaker and prolific writer, Susan Easton Black has authored or co-authored more than 2 dozen books including:

Who’s Who in the Doctrine and Covenants
4 titles in her Glorious Truths series
4 titles in her 400 Questions and Answers series
The Other Martyr: Insights from the Life of Hyrum Smith
Joseph: Exploring the Life and Ministry of the Prophet co-authored with Andrew Skinner
Finding Christ Through the Book of Mormon

Of particular interest to her fireside topic is the 2018 book she co-authored with Larry Porter: Martin Harris: Uncompromising Witness of the Book of Mormon.

The mother of three, Susan Easton Black is currently married to George Durrant. They have served several missions together including a season as writers for the Church Curriculum Department. This year Susan has been part of the Doctrine and Covenants Central team, authoring more than 130 concise biographies as well as a series of insights from each section in the text.

Witnesses of the Book of Mormon