The Myth of Redemptive Violence with David Pulsipher 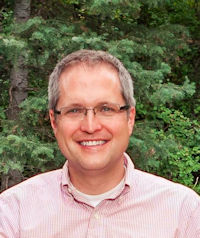 A Closer Look at Conflict, Violence, and Peace in the Book of Mormon

For this episode of the Latter-day Saint Perspectives Podcast, Laura Harris Hales interviews BYU–Idaho professor David Pulsipher about some of the subtle but consequential lessons regarding conflict, violence, and peace found in the Book of Mormon.

Steeped in a culture of violent films and video games, and surrounded with visual images of muscular Book of Mormon warriors, we can easily miss important patterns of conflict in the scriptural narrative. For example, while the text contains multiple examples of defending faith and family with armies and military strategies, it also contains numerous examples of successful nonviolent strategies that are usually depicted as even more effective than violence.

The Nephites, for example, believed that God would protect them from their enemies in at least two ways—he would either “warn them to flee, or to prepare for war, according to their danger” (Alma 48:15). If we carefully read the text to find examples of either of these warnings, we may be surprised to discover that God frequently warns them to flee, but there seem to be no examples of warning them to prepare for war before an attack has begun. God does help them after a war has already started, but if he has a chance to weigh in ahead of time, God seems to prefer fleeing to fighting.

Those who choose to fight a justified battle in self-defense are often helped in their efforts (if they are generally righteous, of course) but these divinely aided efforts achieve only temporary success, lasting at best for only a few years before another attack occurs. Most violence, even divinely assisted violence, sows the seeds for future violence. But more unconventional approaches—such as unarmed yet confrontational compassion—usually achieve much more lasting success. The sons of Mosiah, for example, led a loving invasion into the lands of the Lamanites. Years later, the brothers Nephi and Lehi made a weaponless incursion deep into Lamanite territory. In both instances, significant portions of the Lamanite community became permanently reconciled with their former enemies, the Nephites. In the latter case, the once aggressive Lamanites even voluntarily returned the Nephite lands that they had previously seized—a remarkable testimony to the power of confrontational and assertive compassion.

The Book of Mormon also repeatedly depicts how assertive compassion can be remarkably effective in protecting communities during aggressive invasions. The most famous example of this is the Anti-Nephi-Lehies, who ultimate stopped a brutal attack with only the weapons of love and prayer (and with fewer deaths than most violent defensive efforts described in the narrative). But there are other examples of this as well, including Limhi’s people pacifying an attacking Lamanite army because they went out to meet them without any weapons. Alma’s people also successfully preserved their lives by going out to meet and reason with yet another invading army.

Ultimately, one of the Book of Mormon’s most profound messages regarding conflict is that assertive love is not simply an effective defensive strategy, it also has the capacity to redeem both victims and aggressors. This not only happens with the enemies of the Anti-Nephi-Lehies but also with the brutal opponents of Nephi and Lehi, and even with many of the Gadianton robbers. Over and over again, the Book of Mormon demonstrates that love really is the most powerful force in the universe, destroying whole armies of enemies by transforming them into friends.

For more on these and other surprising Book of Mormon patterns, including an analysis of Nephi’s decision to slay Laban, listen to the full Latter-day Saint Perspective Podcast.

About Our Guest:  J. David Pulsipher is an associate professor of history at Brigham Young University–Idaho. Educated as an undergraduate at Brigham Young University, Utah, he earned a PhD in American Studies from the University of Minnesota. In 2007–2008 he was a visiting professor and Fulbright scholar at Jamia Millia Islamia in Delhi, India. His research focuses on the intersections of LDS history/theology with just war, peace, and nonviolence traditions.

Transcript:  For a transcript of this podcast (once its available from LDS Perspectives), go to http://www.ldsperspectives.com/2019/01/02/myth-of-redemptive-violence-with-david-pulsipher/.