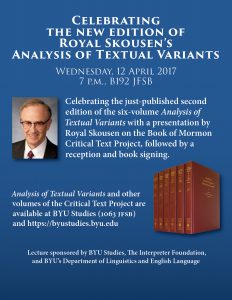 Open to the public

There will be a celebration of the just-published second edition of the six-volume Analysis of Textual Variants with a presentation by Royal Skousen on the Book of Mormon Critical Text Project, followed by a reception and book signing.

This lecture is sponsored by BYU Studies, The Interpreter Foundation, and BYU’s Department of Linguistics and English Language.

We are pleased to announce the publication of the second edition of volume 4 of Royal Skousen’s Book of Mormon Critical Text Project. This six-book set, entitled Analysis of Textual Variants of the Book of Mormon (ATV), fulfills the central task of the critical text project, to restore the original text of the Book of Mormon to the extent possible using scholarly means. In the six books of ATV, Skousen discusses every substantive change to words or phrases in the text as well as changes in the spelling for about a dozen Book of Mormon names. ATV also includes a brief discussion of every type of grammatical change that the text has undergone over the years. (A complete discussion that lists every individual grammatical change was published last year in the two-volume set Grammatical Variation, also available from BYU Studies.)

The changes in the second edition (ATV2) include:

This second edition is truly a limited edition: only 250 copies of the six-book set have been printed.