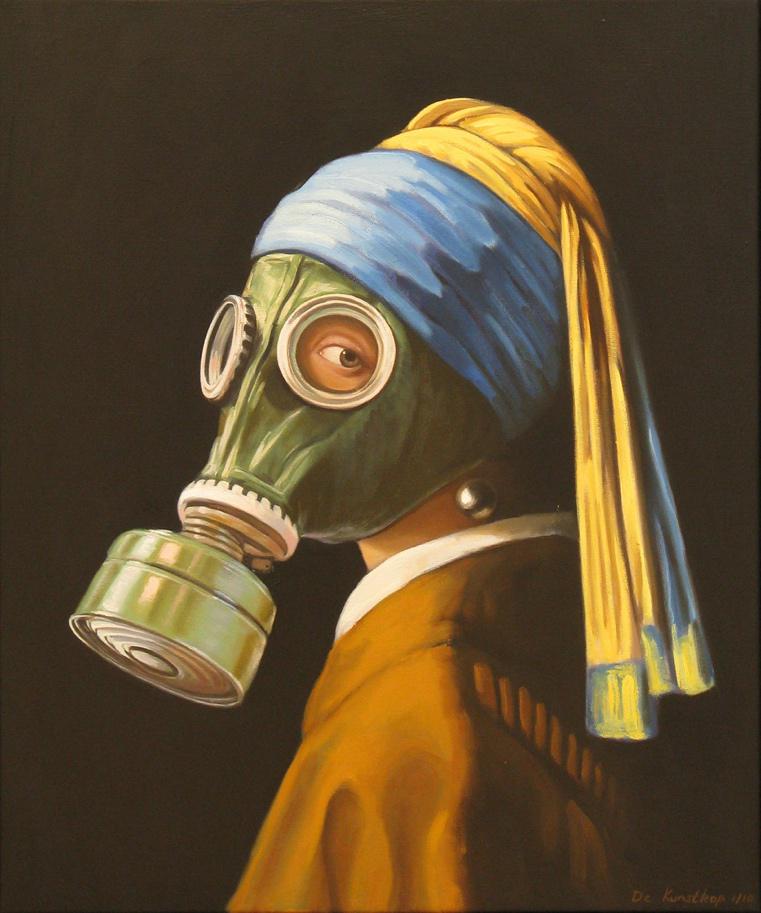 René Jacobs, 1969–: Meisje met gasmasker (Girl with Gas Mask). This painting was inspired by Johannes Vermeer’s (1632–1765) well-known work, Meisje met de parel (Girl with a Pearl Earring), ca. 1669–1670. The gas mask is green rather than black, in ironic harmony with the beauty of nature and the attractive colors of her head scarf.[1]

In a previous Essay,[2] we observed that three distinct parties weep for the wickedness of mankind: God,[3] the heavens,[4] and Enoch himself.[5] In addition, a fourth party, the earth, complains and mourns—though she doesn’t specifically “weep”—for her children.[6] In the present article, we discuss affinities in the ancient Enoch literature and in the laments of Jeremiah to the complaint of the earth in Moses 7:48–49.

Valuable articles by Andrew Skinner[7] and Daniel Peterson,[8] following Hugh Nibley’s lead,[9] discuss interesting parallels to these verses in ancient sources. Peterson follows J. J. M. Roberts in citing examples of Sumerian laments of the mother goddess and showing how a similar motif appears in Jeremiah in the guise of the personified city as the mother of her people[10] by way of analogy to the role of the mourning earth as “the mother of men”[11] in the Book of Moses. Roberts illustrates this by citing Jeremiah 10:19–21:[12]

Woe is me because my hurt!
My wound is grievous.
But I said, “Truly this is my punishment,
and I must bear it.
My tent is plundered and all my cords are broken;
my children have gone out from me, and they are no more;
there is no one to spread my tent again,
and to set up my curtains.
For the shepherds were stupid,
And did not inquire of Yahweh;
Therefore they did not prosper,
And all their flock is scattered.”

Emphasizing the appropriateness of a Sumerian-Akkadian milieu for this concept in Moses 7, Skinner[13] cites S. H. Langdon as follows:[14]

The Sumerian Earth-mother is repeatedly referred to in Sumerian and Babylonian names as the mother of mankind … This mythological doctrine is thoroughly accepted in Babylonian religion. … In early Akkadian, this mythology is already firmly established among the Semites.

Although the motif of a complaining earth is not found anywhere in the Bible, it does turn up in 1 Enoch and in the Qumran Book of Giants.[15] In 1 Enoch we find the following references:

Consistent with other comparisons that have been made between the accounts of Enoch in the Book of Moses, the Qumran Book of Giants, and 1 Enoch, Skinner finds that resemblances to the Qumran Enoch text are more compelling than those found in 1 Enoch. First, he notes that the nature of the wickedness in the Book of Giants is described as “fornication,”[21] which corresponds semantically to the term “filthiness” used in the Book of Moses.[22] By way of contrast, the wickedness being complained of in 1 Enoch is the crimes of murder and violence.

Second, Skinner notes that in both the Qumran Book of Giants fragment and “Moses 7 the earth itself complains of and decries the wickedness of the people, while the [first two] 1 Enoch texts emphasize the cries of men ascending to heaven”[23] by means of the earth.[24]

Skinner also notes that in the Book of Giants and the Book of Moses, “the ultimate motivation behind the earth’s cry for redress against the intense wickedness on her surface” is a plea “for a cleansing of and sanctification from the pervasive wickedness by means of a heavenly personage and heavenly powers. In the Book of Moses the earth importunes,[25] ‘When shall I rest, and be cleansed from the filthiness which has gone forth out of me? When will my Creator sanctify me, that I may rest, and righteousness for a season abide upon my face?’”[26] Likewise, in the Book of Giants, the earth complains about how the wicked have corrupted it through licentiousness and anticipates a destruction that will cleanse it from wickedness.[27]

From a literary standpoint, the complaint of the earth is moving poetry. O. Glade Hunsaker gives two examples:[28]

Enoch hears and describes the personified soul of the earth alliteratively as the “mother of men” agonizing from the bowels of the earth[29] that she is “weary” of “wickedness.” [When the earth began her speech, she commenced with “Wo, wo,” prefiguring the latter echo.] The tension of the drama resolves itself as the voice uses assonance in pleading for “righteousness” to “abide” for a season.

But it is more than poetry, of course. It is also history—and prophecy. Moses 7:61, 64 happily proclaim that “the day shall come that the earth shall rest … for the space of a thousand years” and then woefully inform us that before that relief finally is given, the earth will again suffer great filthiness just before the Lord returns:

Roberts, J. J. M. 1992. "The motif of the weeping God in Jeremiah and its background in the lament tradition of the ancient Near East." In The Bible and the Ancient Near East: Collected Essays, edited by J. J. M. Roberts, 132-42. Winona Lake, IN: Eisenbrauns, 2002.

[1] With the kind permission of René Jacobs, Galerie de Kunstkop, Delft, Holland. Working in a studio that is in the very spot once occupied by Vermeer in Delft, Jacobs, a self-described artist of “tragic, emotionally-deformed realism,” has produced many variants of Vermeer’s portrait, each one highlighting what he calls the “vulnerabilities” of the young girl. His works tell the stories of “small people in their desperate attempt to become larger than life.”

[31] Elder Neal A. Maxwell commented (N. A. Maxwell, One Heart, p. v): “God preserved and prepared Enoch’s people in the midst of awful and enveloping evil, and, reassuringly, he has promised his people in our own time that though ‘great tribulations shall be among the children of men, … my people will I preserve.’”