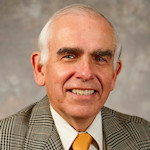 Richard E. Bennett grew up in Sudbury, Ontario, Canada, the son of a nickel miner. “Dick” worked underground as a mining engineer assistant for three years. He also worked as a laborer for the Canadian Pacific Railway before earning a BA degree in English Literature at BYU. Later, he went on to earn an MA in American History at BYU (studying under Marvin Hill and Leonard Arrington) and a PhD in American Intellectual History at Wayne State University (Detroit). He and his wife, Patricia, raised a family of five children in Winnipeg, Manitoba, Canada, where Dick was Head of Archives and Special Collections for the University of Manitoba for 20 years. He also served as stake president in Winnipeg for nine years. Since coming to BYU, Dick has served as Chair of the Department of Church History and Doctrine and as Associate Dean of Religious Education. He has published 10 books and scores of articles on Church History, the most recent being Temples Rising: A Heritage of Sacrifice (Deseret Book, 2019) and 1820: Dawning of the Restoration (BYU and Deseret Book, 2020).

A Uni-Dimensional Picture of a Multi-Faceted Nauvoo Community