The Turkey Sacred Sites Tour
with The Interpreter Foundation 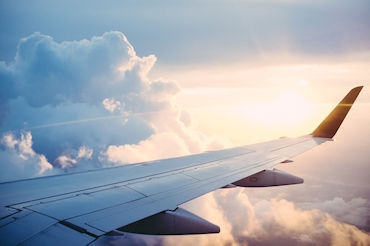 Depart for Istanbul. Overnight on the trans-Atlantic flight. 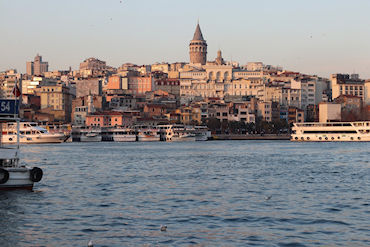 Enjoy a relaxing dinner and, if you like, a traditional Turkish bath experience at Çemberlitaş Hamamı which dates back to the 16th century. (D) 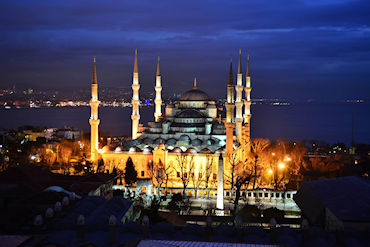 Today is full of surprises! After breakfast, we will first visit the Ancient Hippodrome, the scene of chariot races, and the three monuments: the Egyptian Obelisk, the Serpent Column, and the Column of Constantine. The next stop will be the Blue Mosque. Its name comes from the beautiful, blue ceramic tiles that line the interior. Then we will go to the Hagia Sophia, previously known as the Church of Divine Wisdom. For 1000 years it was the largest church in the world. Then, we’ll see the Topkapı Palace, one of the largest and oldest surviving palaces in the world. After lunch, we will visit Basilica Cistern which is built in 532 A.D. Our last stop will be the Grand Bazaar, the largest covered market in the world! Tonight, we have an optional Whirling Dervish Ceremony at the HodjaPasha Culture Center. You won’t want to miss this. (B,D) 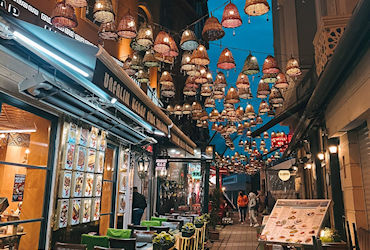 We will start our day at the Istanbul Archeological Museum which is one of the world’s largest museums with over one million works. Afterward, we will visit the Great Palace Mosaic Museum. After lunch, we will go to the Chora Church (Mosque) which has remarkable Christian mosaics. Our last stop, the Spice Bazaar, built in 1664, is one of the most colorful bazaars in Istanbul and offers numberless souvenirs, spices, Turkish delights, dried nuts, and more. We then head to the airport to fly to Antioch which was once called “The Cradle of Christianity.” (B,D) 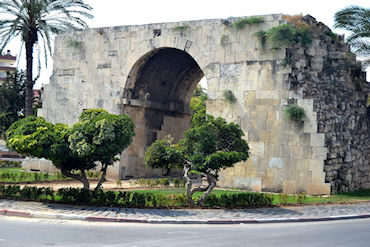 This morning we first visit Antioch, the third largest city of the Roman Empire and the headquarters of St. Paul’s missionary journeys. We will visit the Apostle Peter’s Church where he preached and founded what some believe to have been the first Christian community. We then visit the Antakya Archeology Museum, known for its extensive collection of Roman and Byzantine Era mosaics. We then drive to Tarsus where Saul (Paul) was born, and where Antony and Cleopatra first met. We will visit the ruin of the house and the well of Saint Paul and see the remains of a Roman road in ancient Tarsus. (B,D) 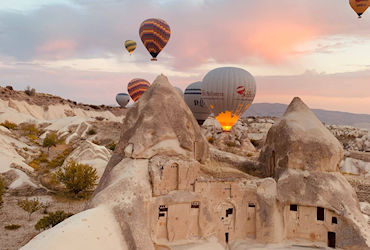 This morning, we embark on a new adventure in the famous Cappadocia, home to underground cities used by Christians to hide from the Roman soldiers. The region is mentioned both in the New Testament and also in Doctrine and Covenants 138:5. At sunrise, you’ll have the option of joining us on a world-famous hot air balloon trip. When you rise to the sky in Cappadocia, you can enjoy the bird’s eye view of this Biblical region adorned with unique rock formations. You will feel as if you are flying on another planet. After breakfast, we will visit Çavuşin, an abandoned village with old cave houses. We’ll also see the amazing Church of St. John. Then we’ll continue to Paşabağı where you can see three-headed fairy chimneys. After Paşabağı, if we have time, we will see more valleys with unique rock formations and fairy chimneys. (B,D) 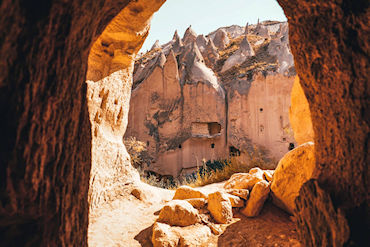 This morning, we have another chance to have a hot air balloon trip (Sometimes the hot air balloons are canceled due to the wind or rain.) After breakfast, we will visit Uçhisar Castle, the highest point in Cappadocia where you can enjoy amazing views of the unique landscape. Then, we’ll continue to Göreme Open Air Museum, the heart of Cappadocia. Göreme Open Air Museum is a UNESCO World Heritage Site, famous for its frescoes that date back to the 10th century and depict the life of Jesus Christ. After lunch, we will see a pottery workshop that reflects thousands of years of history. Pottery production in Avanos has been continuous since the Hittites. You will have the opportunity to buy some of the finest ceramics in the world which have been shaped, fired, glazed, and painted all by hand. To end the day, we will go to the Kaymaklı underground city. We will be flying to Izmir tonight and will end the day in Kuşadası. (B,D) 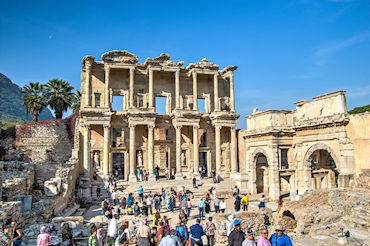 Today is filled with archaeological wonders: First, we will visit the House of the Virgin Mary. Pope John Paul II came and declared this a place of pilgrimage for Christians. Next, we will go to Ephesus, the second most important city of the Roman Empire. Paul lived here and it is widely believed that the Gospel of John was written here. It had a population of 250,000 and monopolized the wealth of the Middle East. It holds treasures such as the impressive Roman Theater which housed more than 25,000 spectators, the magnificent Library of Celsus (the third largest library in the ancient world), Hadrian’s Temple, and Marble Street. We will also see the Terrace Houses of Ephesus, which are luxury Roman Villas. Our lunch today will be at the “Bizim Ev Hanımeli Restoran.” You will be amazed by the Turkish cuisine made by the famous Hatice Hanım, from whom you can get buy a signed copy of her cookbook. After lunch, we will visit the impressive ruins of the Church of Saint John, where many believe John to be buried. We then visit a world-famous Turkish handcraft village. We learn the process of carpet making starting with live silkworms at this award-winning carpet factory. Our last stop is at an overlook where we can view the ruins of the Temple of Artemis (completed around 550 B.C.), which is one of the Seven Wonders of the Ancient World. (B,D) 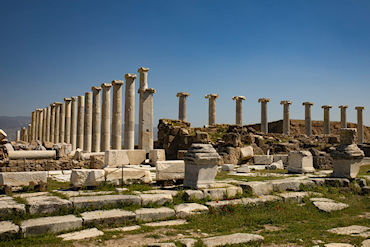 After breakfast, we will be on our way to Laodicea. “I know thy works, that thou art neither cold nor hot: I would thou wert cold or hot” was told to the Laodiceans (Revelation 3:16) who were lukewarm. Then we will visit the ancient Hierapolis and Cotton Castle, a natural wonder of gigantic white waterfalls, stalactites, and natural pools formed over the centuries by the sliding of waters laden with limestone salts from hot springs. The Apostle Philip lived and was martyred in Hierapolis, and we will visit his newly-discovered tomb. It was likely the hot springs of Hierapolis and the cold mountain springs near Colossae that contrasted with the “lukewarm” Laodiceans. You don’t want to miss a chance to swim in the Pamukkale antique pool between the historical monuments (optional). Last, we will visit Colossae where the Church members lived anciently who were the recipients of the Epistle of Paul to the Colossians. (B,D)

This is the last day of the main tour. Those who are continuing with the second part of the tour will stay in Pamukkale. Others will fly from the Denizli Airport to Istanbul and then, the next day, home to the USA with many unforgettable memories from Turkey. (B,D)

Arrive home for those not continuing on the tour. 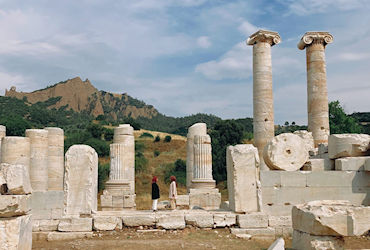 The second exciting part of the tour starts in Philadelphia, the youngest of the Seven Churches of the Book of Revelation. The church members here were challenged to “hold fast” and look forward to the coming of the “new Jerusalem” in the Book of Revelation (Rev. 3:7-13). In the afternoon we will visit, the ancient city and ruins of the famous church of Sardis, the ancient Lydian capital, the city berated by John for its facade of strength when, in reality, it was weak (Rev. 3:1-6). Later, we will see the remains of the Church of Thyatira, famous for its dyeing facilities and a center of the purple cloth trade. We will stay in İzmir tonight. (B,D) 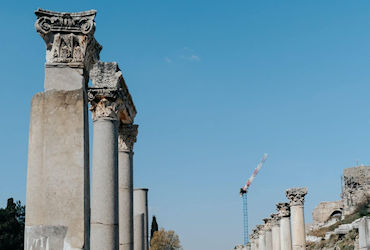 The Church of Smyrna was also one of the Seven Churches. We will visit the most important historical structure, the Agora, one of the best-preserved structures of ancient Ionia. We will then drive to Pergamum and visit the Asclepion, one of the major healing centers of antiquity, and the Acropolis. The church of Pergamum was praised for its forbearance; (Rev. 2:12-17) and it was here that the first Christians were executed by Rome. Then we will be going to Assos and see the Temple of Athena. (B,D) 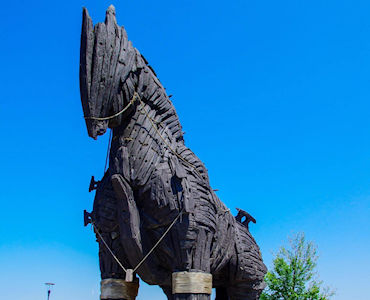 Today, we will visit Alexandria Troas, an important port that was the starting point for St. Paul when he set sail to Europe during his second missionary journey (50 – 52 A.D.). The Apostle visited the city again, during his third missionary journey (53 – 58 AD). Here, Paul had a vision during his second missionary journey and was called to Macedonia (Acts 16:8-13). Paul later spent a week in Troas preaching and Eutychus was resurrected here (Acts 20:6-12). Our next stop will be ancient Troy. It is one of the richest cities of ancient times. It was made famous in Homer’s epic poem, the Iliad. For most of the last 3000 years, people assumed that Homer’s Iliad was fiction and that Troy never existed until the 1860s when its ruins and treasures were found. (B,D)

Today, we will depart from Bursa and go to an important city in early Christian history, İznik (known in ancient times as Nicaea) which was the site of the First and Second Councils of Nicaea and where the Nicene Creed originated. After visiting Nicea, we will return to Istanbul and do a cruise on the Bosphorus. The Bosphorus Strait is the heart of Istanbul and this cruise provides the best view of many of Istanbul’s most popular and beautiful attractions including the Dolmabahçe Palace and the Rumeli Fortress. Tonight, we will say farewell to Turkey and İstanbul by eating our last supper on the terrace of the Arcadia Blue Hotel. It has a breathtaking view looking out over the Old Town and the Bosphorus. (B,D)

Today is our departure day. You will be transferred from your hotel to the Airport. If you have a later flight, you are welcome to attend Church at the Istanbul Branch in Levent, which was dedicated by Elder D. Todd Christofferson. (B,D)