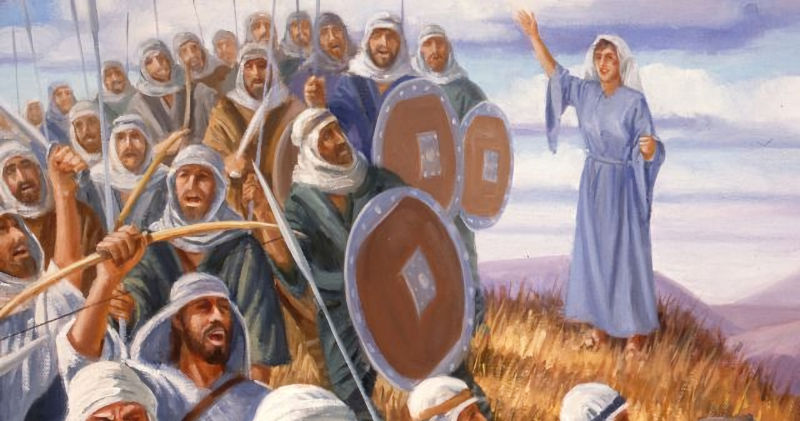 The scriptures testify of Jesus Christ. Ponder how the stories you read in Judges help you come closer to Him.

Judges 2: An angel rebukes Israel for not serving the Lord—As a pattern of future events, a new generation arises that forsakes the Lord and serves Baal and Ashtaroth—The Lord is angry with the children of Israel and ceases to preserve them—He raises up judges to guide and lead them—The Canaanites are left in the land to test Israel.

Judges 3: The children of Israel intermarry with the Canaanites, worship false gods, and are cursed—Othniel judges the Israelites—They serve Moab and are delivered by Ehud, who slays Eglon.

Judges 4: Deborah, a prophetess, judges Israel—She and Barak deliver Israel from the Canaanites—Jael, a woman, slays Sisera, the Canaanite.

Judges 6: Israel is in bondage to the Midianites—An angel appears to Gideon and calls him to deliver Israel—He overthrows the altar of Baal, the Spirit of the Lord rests upon him, and the Lord gives him a sign to show he is called to deliver Israel.

Judges 7: Gideon’s army is reduced to 300—They frighten the Midianite armies with trumpets and lights—The Midianites fight among themselves, flee, and are defeated by Israel.

Judges 8: Gideon pursues and destroys the Midianites—He frees the children of Israel but refuses their invitation to reign as king over them—Gideon dies, and Israel returns to idolatry.

Judges 13: Israel is in Philistine bondage for forty years—An angel comes to Manoah’s wife and promises a son who will begin to deliver Israel—The angel comes again; he ascends in a flame from the altar—Samson is born, and the Spirit of the Lord moves upon him.

Judges 14: Samson slays a young lion with his bare hands—He marries a Philistine wife, propounds a riddle, is deceived by his wife, and slays thirty Philistines.

Judges 15: Samson burns the grain of the Philistines—They burn his wife and father-in-law—Samson slays a thousand Philistines at Lehi with the jawbone of an ass.

Judges 16: Samson carries away the doors of the gate of Gaza—He loves Delilah, who delivers him to the Philistines—He destroys a building, killing himself and 3,000 others.