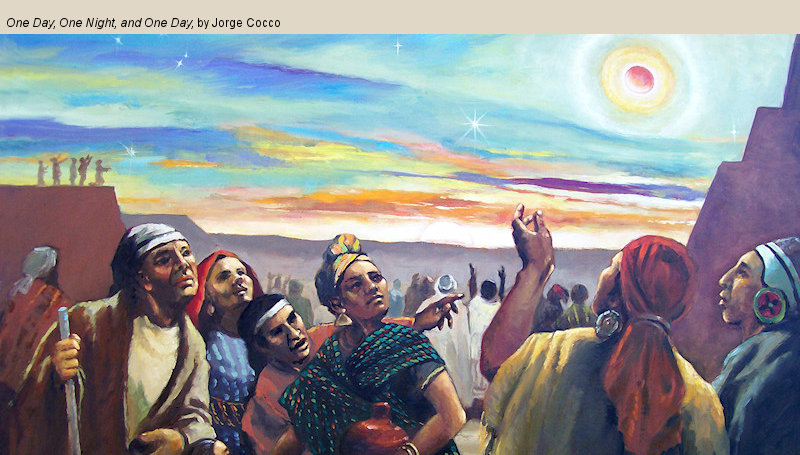 The Nephites witnessed miraculous signs, but over time they forgot what they had experienced (see 3 Nephi 2:1). Recording your impressions will help you remember your spiritual experiences while studying 3 Nephi 1–7.

3 Nephi 1: Nephi, the son of Helaman, departs out of the land, and his son Nephi keeps the records—Though signs and wonders abound, the wicked plan to slay the righteous—The night of Christ’s birth arrives—The sign is given, and a new star arises—Lyings and deceivings increase, and the Gadianton robbers slaughter many. About A.D. 1–4.

3 Nephi 2: Wickedness and abominations increase among the people—The Nephites and Lamanites unite to defend themselves against the Gadianton robbers—Converted Lamanites become white and are called Nephites. About A.D. 5–16.

3 Nephi 3: Giddianhi, the Gadianton leader, demands that Lachoneus and the Nephites surrender themselves and their lands—Lachoneus appoints Gidgiddoni as chief captain of the armies—The Nephites assemble in Zarahemla and Bountiful to defend themselves. About A.D. 16–18.

3 Nephi 4: The Nephite armies defeat the Gadianton robbers—Giddianhi is slain, and his successor, Zemnarihah, is hanged—The Nephites praise the Lord for their victories. About A.D. 19–22.

3 Nephi 5: The Nephites repent and forsake their sins—Mormon writes the history of his people and declares the everlasting word to them—Israel will be gathered in from her long dispersion. About A.D. 22–26.

3 Nephi 6: The Nephites prosper—Pride, wealth, and class distinctions arise—The Church is rent with dissensions—Satan leads the people in open rebellion—Many prophets cry repentance and are slain—Their murderers conspire to take over the government. About A.D. 26–30.

3 Nephi 7: The chief judge is murdered, the government is destroyed, and the people divide into tribes—Jacob, an anti-Christ, becomes king of a secret combination—Nephi preaches repentance and faith in Christ—Angels minister to him daily, and he raises his brother from the dead—Many repent and are baptized. About A.D. 30–33.