“Preserved by His Marvelous Power”
Alma 53-63 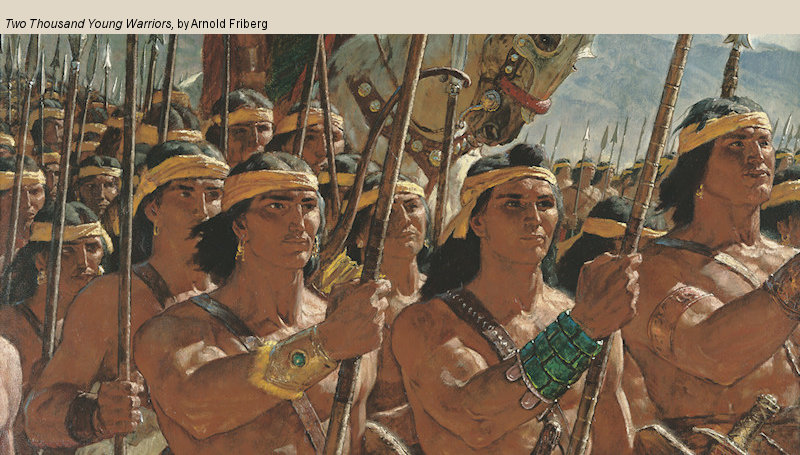 The accounts in Alma 53–63 can help you see the consequences of living gospel truths or rejecting them. As you read Alma 53–63, record promptings and ponder ways you can live the truths you learn.

Alma 53: The Lamanite prisoners are used to fortify the city Bountiful—Dissensions among the Nephites give rise to Lamanite victories—Helaman takes command of the two thousand stripling sons of the people of Ammon. About 64–63 B.C.

Alma 55: Moroni refuses to exchange prisoners—The Lamanite guards are enticed to become drunk, and the Nephite prisoners are freed—The city of Gid is taken without bloodshed. About 63–62 B.C.

Alma 56: Helaman sends an epistle to Moroni, recounting the state of the war with the Lamanites—Antipus and Helaman gain a great victory over the Lamanites—Helaman’s two thousand stripling sons fight with miraculous power, and none of them are slain. Verse 1, about 62 B.C.; verses 2–19, about 66 B.C.; and verses 20–57, about 65–64 B.C.

Alma 57: Helaman recounts the taking of Antiparah and the surrender and later the defense of Cumeni—His Ammonite striplings fight valiantly; all are wounded, but none are slain—Gid reports the slaying and the escape of the Lamanite prisoners. About 63 B.C.

Alma 58: Helaman, Gid, and Teomner take the city of Manti by a stratagem—The Lamanites withdraw—The sons of the people of Ammon are preserved as they stand fast in defense of their liberty and faith. About 63–62 B.C.

Alma 59: Moroni asks Pahoran to strengthen the forces of Helaman—The Lamanites take the city of Nephihah—Moroni is angry with the government. About 62 B.C.

Alma 60: Moroni complains to Pahoran of the government’s neglect of the armies—The Lord suffers the righteous to be slain—The Nephites must use all of their power and means to deliver themselves from their enemies—Moroni threatens to fight against the government unless help is supplied to his armies. About 62 B.C.

Alma 61: Pahoran tells Moroni of the insurrection and rebellion against the government—The king-men take Zarahemla and are in league with the Lamanites—Pahoran asks for military aid against the rebels. About 62 B.C.

Alma 62: Moroni marches to the aid of Pahoran in the land of Gideon—The king-men who refuse to defend their country are put to death—Pahoran and Moroni retake Nephihah—Many Lamanites join the people of Ammon—Teancum slays Ammoron and is in turn slain—The Lamanites are driven from the land, and peace is established—Helaman returns to the ministry and builds up the Church. About 62–57 B.C.

Alma 63: Shiblon and later Helaman take possession of the sacred records—Many Nephites travel to the land northward—Hagoth builds ships, which sail forth in the west sea—Moronihah defeats the Lamanites in battle. About 56–52 B.C.