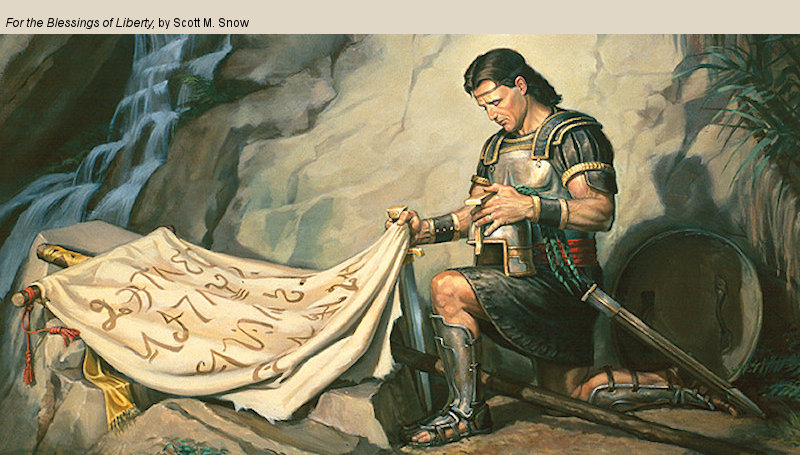 It may seem that the events described in Alma 43–52 are not particularly relevant to you. But as in all scripture, the Lord has a message for you. Prayerfully seek it.

Alma 44: Moroni commands the Lamanites to make a covenant of peace or be destroyed—Zerahemnah rejects the offer, and the battle resumes—Moroni’s armies defeat the Lamanites. About 74–73 B.C.

Alma 45: Helaman believes the words of Alma—Alma prophesies the destruction of the Nephites—He blesses and curses the land—Alma may have been taken up by the Spirit, even as Moses—Dissension grows in the Church. About 73 B.C.

Alma 46: Amalickiah conspires to be king—Moroni raises the title of liberty—He rallies the people to defend their religion—True believers are called Christians—A remnant of Joseph will be preserved—Amalickiah and the dissenters flee to the land of Nephi—Those who will not support the cause of freedom are put to death. About 73–72 B.C.

Alma 47: Amalickiah uses treachery, murder, and intrigue to become king of the Lamanites—The Nephite dissenters are more wicked and ferocious than the Lamanites. About 72 B.C.

Alma 48: Amalickiah incites the Lamanites against the Nephites—Moroni prepares his people to defend the cause of the Christians—He rejoices in liberty and freedom and is a mighty man of God. About 72 B.C.

Alma 49: The invading Lamanites are unable to take the fortified cities of Ammonihah and Noah—Amalickiah curses God and swears to drink the blood of Moroni—Helaman and his brethren continue to strengthen the Church. About 72 B.C.

Alma 50: Moroni fortifies the lands of the Nephites—They build many new cities—Wars and destructions befell the Nephites in the days of their wickedness and abominations—Morianton and his dissenters are defeated by Teancum—Nephihah dies, and his son Pahoran fills the judgment seat. About 72–67 B.C.

Alma 51: The king-men seek to change the law and set up a king—Pahoran and the freemen are supported by the voice of the people—Moroni compels the king-men to defend their country or be put to death—Amalickiah and the Lamanites capture many fortified cities—Teancum repels the Lamanite invasion and slays Amalickiah in his tent. About 67–66 B.C.

Alma 52: Ammoron succeeds Amalickiah as king of the Lamanites—Moroni, Teancum, and Lehi lead the Nephites in a victorious war against the Lamanites—The city of Mulek is retaken, and Jacob the Zoramite is slain. About 66–64 B.C.