Jesus Christ Will Come to Redeem His People
Alma 8-12 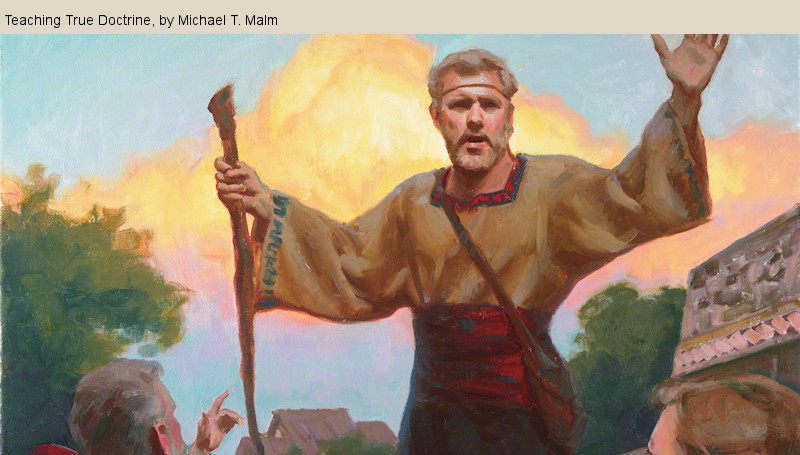 Studying the scriptures invites revelation. So as you read Alma 8–12, record the impressions of the Spirit as He teaches you from the messages of Alma and Amulek.

Alma 8: Alma preaches and baptizes in Melek—He is rejected in Ammonihah and leaves—An angel commands him to return and cry repentance unto the people—He is received by Amulek, and the two of them preach in Ammonihah. About 82 B.C.

Alma 9: Alma commands the people of Ammonihah to repent—The Lord will be merciful to the Lamanites in the last days—If the Nephites forsake the light, they will be destroyed by the Lamanites—The Son of God will come soon—He will redeem those who repent, are baptized, and have faith in His name. About 82 B.C.

Alma 10: Lehi descended from Manasseh—Amulek recounts the angelic command that he care for Alma—The prayers of the righteous cause the people to be spared—Unrighteous lawyers and judges lay the foundation of the destruction of the people. About 82 B.C.

Alma 11: The Nephite monetary system is set forth—Amulek contends with Zeezrom—Christ will not save people in their sins—Only those who inherit the kingdom of heaven are saved—All men will rise in immortality—There is no death after the Resurrection. About 82 B.C.

Alma 12: Alma speaks to Zeezrom—The mysteries of God can be given only to the faithful—Men are judged by their thoughts, beliefs, words, and works—The wicked will suffer a spiritual death—This mortal life is a probationary state—The plan of redemption brings to pass the Resurrection and, through faith, a remission of sins—The repentant have a claim on mercy through the Only Begotten Son. About 82 B.C.