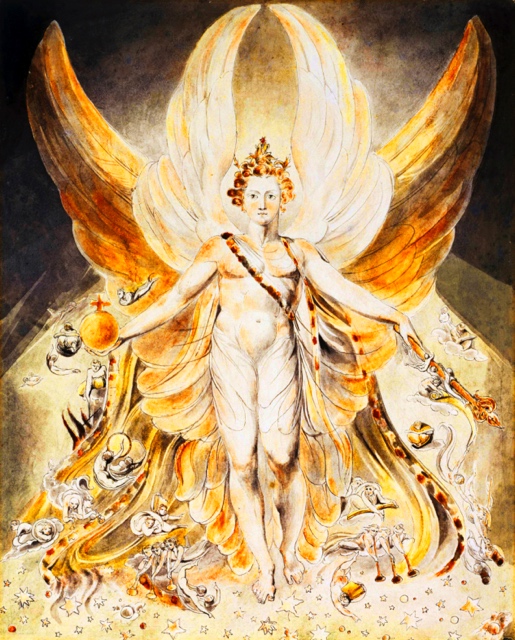 In this Essay, we will explore how William Blake’s masterpiece describes Satan in his original glory. One can see in his perverse appropriation of the symbols of kingship not only his selfish aspiration to God’s own power, but also an anticipation of his ignominious fall from grace. Nowhere are the premortal events related to this theme described more fully and accurately than in Moses 4:1–4.

“Thou Wast Perfect in Thy Ways from the Day That Thou Was Created,
Till Iniquity Was Found in Thee” (Ezekiel 28:15)

Blake’s illustration above is derived from a reading of v. 14 of the Latin version of Ezekiel’s prophecy that sees Lucifer as the “cherub with extensive wingspan.” The orb and scepter in his hands symbolize the power and authority from God given before his fall from heaven. He stands on the heavenly mountain, surrounded by “tiny, joyous figures embody[ing] the precious stones and beautifully crafted musical instruments mentioned in the Biblical text.”[1]

The fall of the king of Tyre in this lamentation from Ezekiel is frequently interpreted as having been typed on Adam,[2]but has also been applied to the rebellion of Satan. The king is described as a “seal of perfection,”[3] in essence Yahweh’s signet ring, faithfully bearing in every detail “the likeness of Yahweh” and the righteous exercise of “divine authority in the world.”[4] The use of this term may also witness his perfection in the keeping of the covenant to which he is bound to his sovereign Lord.[5] Previously, the king had dwelled “upon the holy mountain of God,”[6] walking “up and down in the midst of stones of fire.”[7] Verse 13 explicitly identifies this mountain as Eden.[8] “Eden, as a luxuriant cosmic mountain becomes an archetype or symbol for the earthly temple,”[9] a place from which the protagonist is to be “cast … out”[10] because of the “multitude of [his] iniquities.”[11] Significantly, God says that the king is not only to be cast out, but also that he is to be “cast … to the ground.”[12] The Hebrew term eres (ground) has a double sense: “[o]n the one hand, it evokes an iconoclastic picture of an idol being hurled down and lying in ruins on the ground (eres)”[13] rather than standing in the holy place of the sanctuary. On the other hand, it evokes the imagery of the king being thrown out of Eden to live on the earth (eres).[14]

The scepter and the orb shown in Satan’s hands are emblems of kingship. In British coronation ceremonies, the scepter is held in the right hand so that it may be used “to stop the growth of iniquity, protect the Holy Church of God and defend widows and orphans.”[15] The British king or queen holds the Orb in the left hand in order to signify “the domination of Christ over the whole world.”[16]

To better comprehend the significance of the inspired imagery of Blake, it should be understood that the royal symbols of such monarchs are often modeled on much earlier precedents. For example, according to Endré Tóth, the garments and emblems of European kings resembled those of the Israelite high priest until the fashion of military dress eventually became the style.[17]

Likewise, the staff is the symbolic equivalent of the sword. Brannon M. Wheeler notes that “the association of swords with royal symbolism is found in many different cultural traditions. Swords are used in various cultures as symbols of investiture. The sword and the rod, for which it is a substitute, is also used as a mark of religious authority.”[18]

It should also be observed that although kings and queens are often pictured with an orb in their cupped hand, “no such ensign as an orb existed until the 11th century,”[19] previous depictions in the ancient world having been entirely “symbolic.” And what kinds of things did these earlier depictions symbolize?

Stephen Smoot has the traced priestly symbolism of the cupped hand, from which the tradition of holding the Orb was derived, to Egyptian and Israelite sources.[20] He concludes that “in ancient Israel, the action of filling the cupped hand or palm was directly associated with being sanctified and consecrated in a priestly setting.” In addition to temple or ritual usage, in ancient Egypt, Smoot demonstrates that in the mortuary realm, the outstretched, cupped hand could also represent a gesture of the beatified deceased receiving blessings.”

To highlight Lucifer’s perversity, Blake has conspicuously reversed the hands in which the emblems of European monarchy are normally held: what should be grasped by the right hand is portrayed in his left hand, and vice versa. His perversity reveals him to be fraud and a pretender — he is not now what he seems to be nor what yet he secretly aspires to become.

Anderson, Gary A. "The cosmic mountain: Eden and its early interpreters in Syriac Christianity." In Genesis 1-3 in the History of Exegesis: Intrigue in the Garden, edited by G. A. Robins, 187-224. Lewiston/Queenston: Edwin Mellen Press, 1988.

Calabro, David. "Rolling out the etymology of northwest Semitic sglt." Presented at the Proceedings of the Eighth Afro-Asiatic Congress, Naples, Italy 2008, 63-78.

Gothic Nightmares: Satan in His Original Glory. In Tate Gallery. http://www.tate.org.uk/britain/exhibitions/gothicnightmares/rooms/room7.htm. (accessed May 20, 2009).

[5] Calabro convincingly describes the imagery of a sealed contract or covenant associated with both cylinder seals and signet rings in northwest Semitic languages (D. Calabro, Rolling Out, especially pp. 68-72).

[6] Note that the king sits “in the seat of God, in the midst of the seas,” the latter reference recalling the imagery of Eden as the source of the waters of the earth (Genesis 2:10).

[8] Some readers object to the idea of Eden being located on a cosmic mountain, since this aspect is not mentioned explicitly in Genesis 2–3. See G. A. Anderson, Cosmic Mountain, 192-199 for careful readings that argue for just such a setting.