Book of Moses Essays
#47: Moses Witnesses the Creation (Moses 2)
The Creation of Light and the Heavenly Host
(Moses 2:3-5) 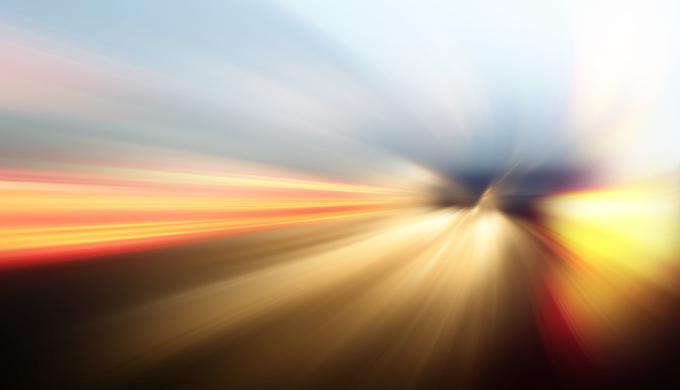 In this Essay we will explore the creation of light on Day One.

The Nature of the Primordial Light

The nature of the light referred to in this verse is not explained. Several possibilities have been suggested. Some interpreters see this event as consonant with the prevailing scientific view that describes the birth of our universe as a sudden burst of light and energy of unimaginable scale. Others see this phrase as referring to a “local” event whereby the natural light of the sun was created.[2] It is, of course, a given that the sun was created prior to the fourth day, though from the vantage point of earth no light will “appear in the firmament” until that later time.[3]

By way of contrast to such naturalistic readings, Hugh Nibley’s interpretation seems more consistent with related scriptural passages—namely, that the light referred to was the result of God’s presence: “All this time the Gods had been dwelling in light and glory, but the earth was dark… This was not the first creation of light. Wherever light comes into darkness, ‘there is light.’”[4] Consistent with this view, President John Taylor wrote that God:

Doctrine and Covenants 88:12-13 continues its description to make it clear that this light is something over and above mere physical light as generally conceived, since it not only “enlighteneth your eyes” but also “quickeneth your understandings,” governs and “giveth life to all things,” and “proceedeth forth from the presence of God to fill the immensity of space.”[7] As Isaac Watts so expressed it: “In vain the bright, the burning sun / Scatters his feeble light; / ’Tis Thy sweet beams create my noon; / If Thou withdraw, ’tis night.”[8]

The idea of God Himself as the source of this special light is consistent with many ancient sources.[9] For example, rabbinical commentators saw the light at the beginning of Creation as the splendor of God Himself, who “cloaked himself in it as a cloak” and it “shone forth from one end of the world to the other.”[10] Rabbinic tradition further explained that the wicked are not worthy to enjoy this light of God’s presence, therefore it was stored away after the seventh day of Creation to be enjoyed later by the righteous in the Messianic Age.[11] A corresponding light was said to fill the place of God’s presence in the temple. As Margaret Barker described it:[12]

The brightness of the Holy of Holies was the light of Day One, before the visible world had been created… Those who entered the Holy of Holies entered this place of light, beyond time and matter, which was the presence of “the King of kings and Lord of lords who alone has immortality and dwells in unapproachable light.”[13] This was the place of glory to which Jesus knew he would return after the crucifixion, “the glory which I had with thee before the world was made.”[14] In the Gospel of Thomas, Christians are described as the new high priesthood who enter the light, and Jesus instructed his disciples to say to the guardians (the cherub guardians of Eden?) “We came from the light, the place where the light came into being on its own accord and established [itself].” 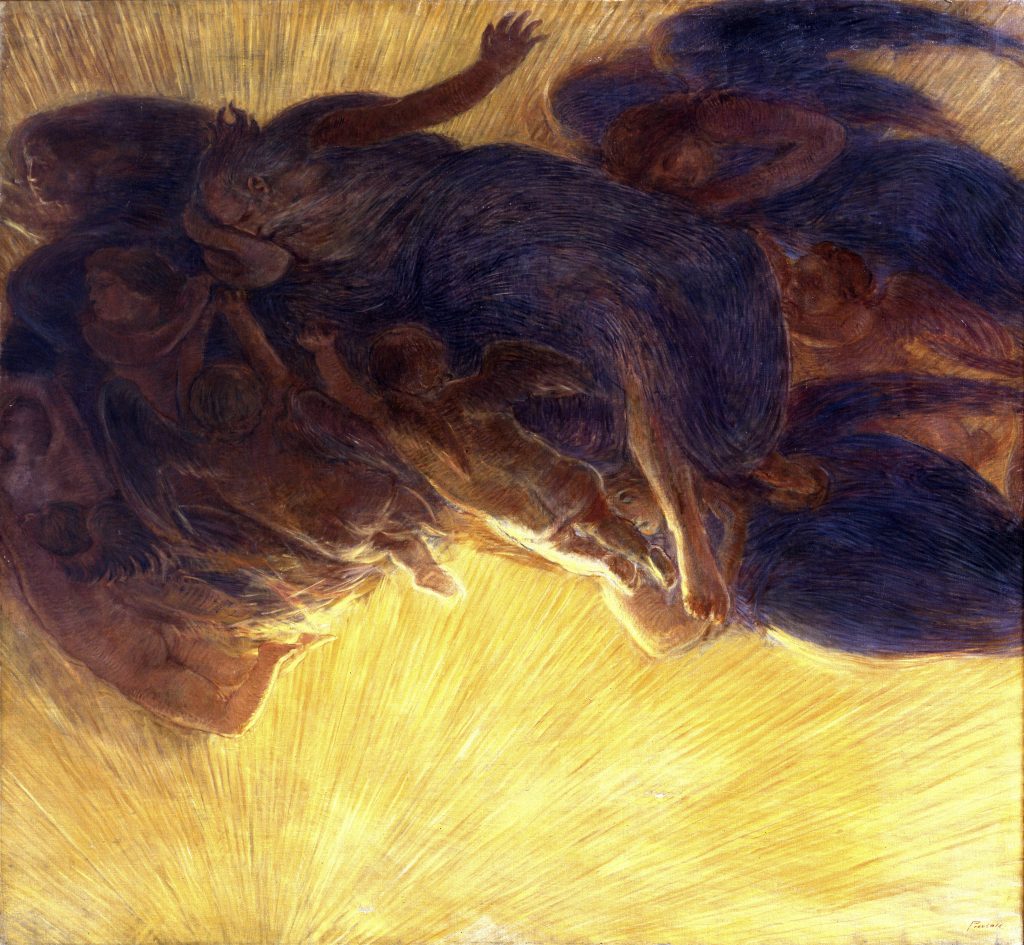 Light and the Premortal Heavenly Host

Some ancient sources assert that the heavenly hosts[15]—variously described in ancient sources as including the angels, the sons of God, and/or the souls of humanity—were part of the light described in connection with Day One of Creation.[16] Though the idea is not widely known or appreciated today, the visual depiction of this event has a venerable history, stretching from medieval times to our own, as seen in this magnificent painting by Previati.

Although a more limited version of this idea is often associated with the fathers of the early Christian church, its origin actually goes back centuries earlier to strands of Jewish tradition. For example, the book of Jubilees reports that on the first day God created various ranks of angels along with “all of the spirits of his creatures which are in heaven and on earth.”[17] Zoroastrian texts also speak of a spiritual creation of all mankind (and also of the spirits who chose to follow the evil Angra Mainyu) prior to the physical creation.[18] In contrast to later Christian thought that characterized the angels as a different race of beings than man, Joseph Smith taught that “there are no angels who minister to this earth but those who do belong or have belonged to it”—i.e., as human mortals.[19] Note that in Hebrew, the same word (malak) is used for both “angel” and (human) “messenger.”[20] 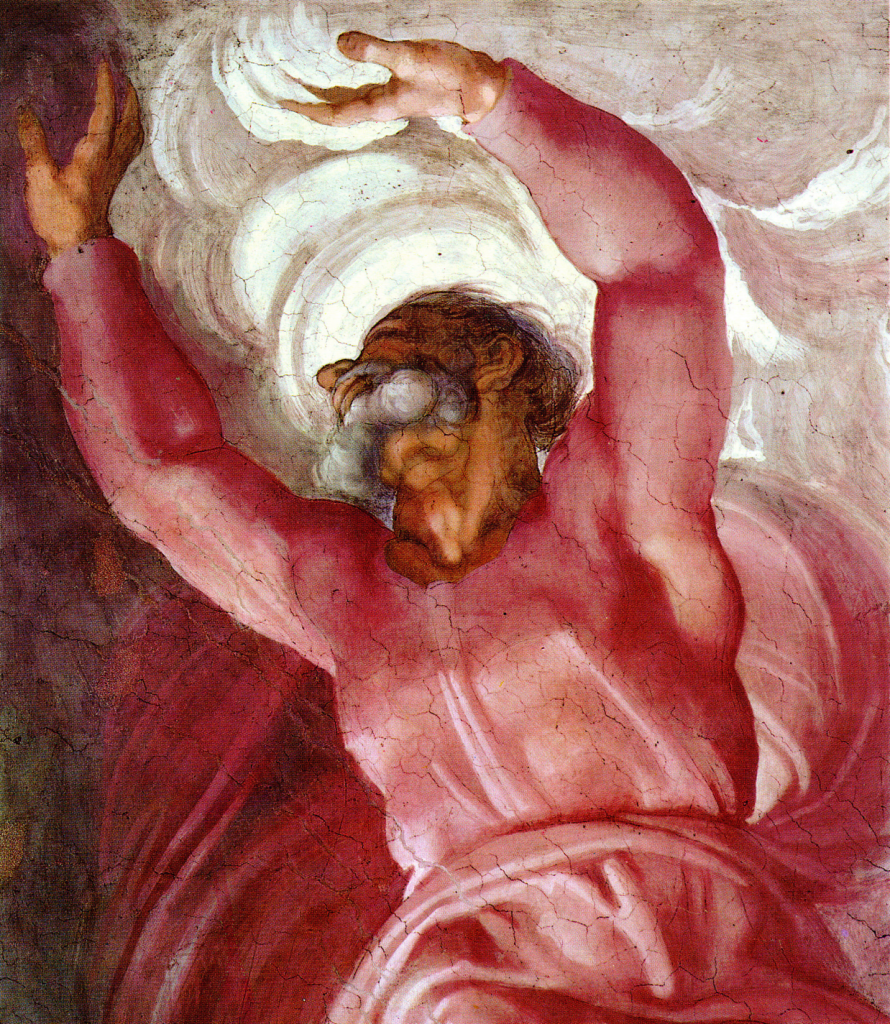 In Moses 2:4 we read: “And I, God, divided the light from the darkness.” In Michelangelo’s sublime depiction of the first act of Creation, “the Almighty is twisted around in serpentine manner, much like the contorted position the artist himself was assuming to create the fresco.”[21] God runs his fingers through indistinct chaos, separating the brownish obscurity of darkness from the white cloudlike billows of light. While Michelangelo linked the scene typologically to the Last Judgment,[22] this masterful imagery is an even more fitting portrayal of the symbolism of the “First Judgment,” effected at the moment when Satan’s rebellious hosts were cast out of heaven.[23]

From this perspective, the division of the light from the darkness might be seen as an allusion to premortal separation of the spirits who rebelled (“the darkness”) and were cast out of the presence of God (“the light”).[24] The tenor aria of the archangel Uriel from Haydn’s 1798 Die Schopfung (“The Creation”) beautifully expresses the idea: “Now vanish before the holy beams / The gloomy shades of ancient night; / The first day appears. / Now chaos ends, and order fair prevails. / Affrighted fly hell’s spirits black in throngs: / Down they sink in the deep abyss / To endless night.”[25] A parallel to this event can be seen in the book of Enoch where rebel angels (in this case, the Watchers,[26] rather than the premortal hosts of Satan) are sent to dwell forever in the abyss.[27]

During a short stint as an unmatriculated graduate student at BYU in 1980-81, I served as a research assistant for the prominent clinical psychologist Allen Bergin. Among other assignments, I was designated as a scribe for a short-lived series of meetings of what was called “The Light Group”—a small multi-disciplinary group of faculty made up mostly of scientists and philosophers who were interested in the scientific and spiritual aspects of light. It was a far-fetched idea to think that such a group could come to understand the ultimate scriptural sense of light and no headway was really made. However, it was inspiring to see firsthand a group like this focused on something so far beyond the mundane. “A man’s reach should exceed his grasp, or what’s a heaven for?”[28]

Figure 3. Detail from Sistine Chapel fresco. Public domain, https://www.olmcsandiego.org/faith-formation-blog/let-there-be-light (accessed September 1, 2020). Though depicting the very beginnings of Creation, the panel was painted, ironically, “near the end of Buonarotti’s sufferings up on the ceiling. He was in a desperate rush to finish, both for his personal health and because there was concern that the pope, who had been very ill, might not live to see the project completed. If Julius had died before it was done, the next pontiff might have cancelled the artist’s contract, and perhaps have changed or abandoned the work as well. In creating this panel, Michelangelo worked without … his assistants who would prepare the full-size cartoons to transfer the outlines of the figures to be painted into the wet plaster intonaco [i.e., the thin layer of plaster on which the fresco was painted]. In fact, this sculptor who had said of himself ‘I am no painter’ painted this entire panel in one day—totally freehand, something few highly experienced fresco artists would ever dare attempt” (B. Blech, et al., Secrets, pp. 194-195).

Barker, Margaret. The Revelation of Jesus Christ: Which God Gave to Him to Show to His Servants What Must Soon Take Place (Revelation 1.1). Edinburgh, Scotland: T&T Clark, 2000.

———. The Hidden Tradition of the Kingdom of God. London, England: Society for Promoting Christian Knowledge (SPCK), 2007.

Watts, Isaac. Hymns, and Spiritual Songs in Three Books with an Essay Towards the Improvement of Christian Psalmody, by the Use of Evangelical Hymns in Worship, As Well As the Psalms of David. London, England: John Lawrence, 1707-1709. Reprint, Watts, Isaac, and Samuel Worcester. Psalms, Hymns and Spiritual Songs of the Rev. Isaac Watts, D. D. To Which Are Added Select Hymns from Other Authors, and Directions for Musical Expression by Samuel Worcester, D. D. Boston, MA: Crocker & Brewster, 1856. http://books.google.com/books?id=zSZs5jCXgHoC. (accessed April 13).

Michelangelo, unlike many of his contemporaries, was not a simple, uneducated artisan. Rather, he was a deeply religious man who frequently attended Mass, pored over scriptural texts and commentaries, and, in his early years, was deeply moved by the infamous religious reformer in Florence, Savonarola. Like many in pre-Reformation Rome, Michelangelo was also deeply impressed with how the beginnings of Creation were not only a witness to the glory of the Creator but also pointed, however mysteriously, to our end or telos within the cosmos.