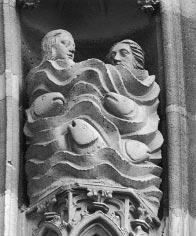 In Moses 6:60, Enoch declares the word of the Lord about the essential place of baptism in the suite of saving ordinances. In v. 64, he illustrates his point by describing the baptism of Adam. In this article, we will discuss the antiquity of water symbolism in rituals of rebirth, showing that in many ancient traditions, as in the Book of Moses, they are believed to go back to Adam.

Nevertheless, we will not attempt to summarize the varied and controversial histories of the water rituals of purification, penitence, and proselytism in Jewish and Christian traditions.[2] Suffice it to say that no credible scholar today doubts that immersion was practiced by Jews for various religious purposes in pre-Christian times, nor would deny that immersion was the standard form of baptism in the early Christian church.

With respect to traditions concerning the antiquity of baptism, we note in passing that not only the Book of Moses but also several Islamic, Christian, Mandaean, and Manichaean accounts speak of the baptism of Adam and Eve.[3]

Some scholars, including Stephen D. Ricks[4] and David J. Larsen,[5] have argued that the water symbolism of baptism is better understood when it is compared and contrasted with separate rituals in ancient Israel wherein the king was washed and anointed, both prior to his initiation and also at regular renewals of his right to rule. For example, Larsen writes:[6]

We learn from the Bible that the … king was washed and purified, likely at the spring of Gihon.[7] He was anointed on the head with a perfumed olive oil that was kept in a horn in the sanctuary.[8] He was clothed in robes and also wore a priestly apron (ephod[9]), sash,[10] and diadem/headdress.[11] Finally, the king was consecrated a priest “after the order of Melchizedek.”[12]

Relevant context for understanding these practices also can be found in the religious literature of ancient Mesopotamia. For example, in the story of Atrahasis we can trace the basic conception that water, spirit, and blood—the latter derived from the body of a slain deity—were the life-giving elements used by the gods in the creation of humankind.[13] 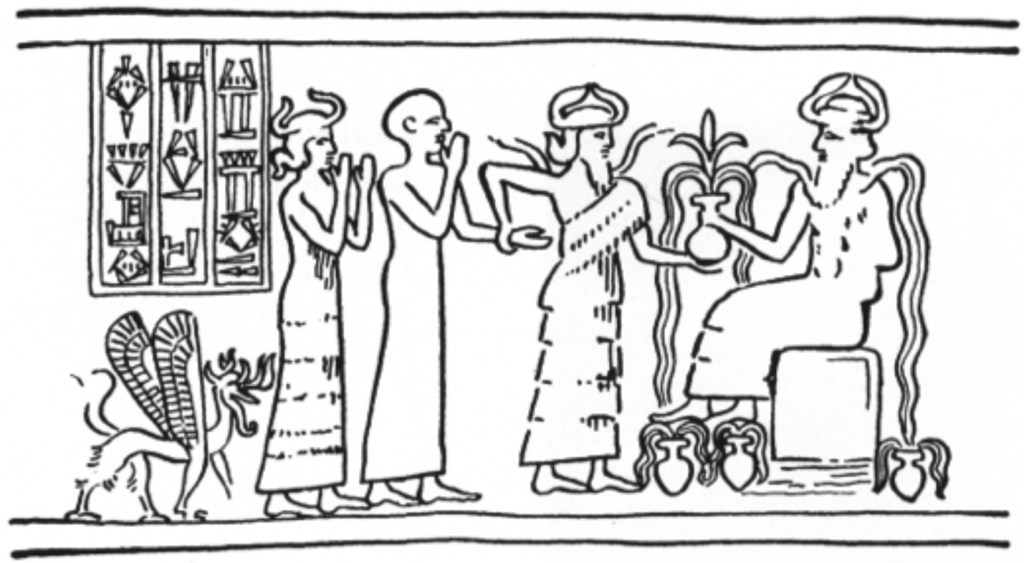 In the seal of Gudea shown above, the bareheaded and nearly-naked Gudea is introduced by a mediating deity to a seated god. The mediating god presents a vase featuring a seedling and flowing water to the seated god. Water flows from the seated god himself into flowing vases, no doubt anticipating the sprouting of seedlings that have yet to appear. The scene suggested is one of rebirth and transformation: drawing on the phraseology of the Gospel of John we might conjecture that having been “born of water,”[15] the king, in likeness both of the sprout within the flowing vase and the god to which he is being introduced, is also to become a “well of water springing up into everlasting life.”[16] A sculpture of Gudea attests to just such an interpretation, where Gudea himself is shown, with his head now covered, holding a vase of flowing water in likeness of the seated god.

A comparative analysis of the full set of rituals of kingship at Mari in Old Babylon and in the Old Testament[17] concluded that none of the major themes of Mesopotamian kingship ritual, including the roles that water plays in those rites,[18] should be unfamiliar to students of the Bible.

Similar rites of water purification[19] with similar functions existed as part of the ritual architecture of ancient Egyptian temples (cf. the nouns š, “lake, pool”[20] and mr, “canal”; “artificial lake”[21]). For example, the temple at Karnak boasts an enormous artificial, sacred lake in which the temple priests—i.e., of the class termed wʿb—“purif[ied] themselves.”[22] Egyptian wʿb as an adjective means “pure”[23] and as an intransitive verb means to “purify o[ne]self” or “bathe” and as a transitive verb to “cleanse or purify” something.[24] As a noun, wʿb denoted “purification” or “purity.”[25] The derived causative verb swʿb denoted, “cleanse, purify,” but also to “consecrate temple servants.”[26]

The waters of the sacred lake or pool in which the wʿb-priests purified themselves symbolized the primeval waters from which the primordial hillock emerged in the creation.[27] The Egyptian ideogram ʿb used to write wʿb was the “combination of [a foot hieroglyph] with a vase from which water flows.”[28] In other words, it was a foot with water running over it. James P. Allen suggests that the wʿb was originally a lay priest and that the term originally represented the notion of “cleaner” (i.e., purifier).[29] In terms of both architectural placement and ritual design, it is not difficult to see an antecedent to the tabernacle’s bronze laver and the brazen sea in Solomon’s temple in such sacred lakes (see further below).

Indeed, as John Walton correctly observes, “the ideology of the temple is not noticeably different in Israel than it is in the ancient Near East. The difference is in the God, not in the way the temple functions in relation to the God.”[30]

David Calabro, Floor Plan of the Temple of Solomon, with Suggested Locations of the Ritual in Moses 2–6[31]

David Calabro has explored the possibility that a text with an outline similar to the book of Moses may have been used in Solomon’s Temple to instruct and guide initiates through specific areas where instruction was given and rituals were performed. Of relevance to the present discussion is the connection he suggested between the text of Moses 6 and the “molten sea”[32] that stood in front of the temple. After discussing several clues supporting his thesis from the Book of Moses, Calabro concluded:[33]

While there is no evidence that the temple laver was used as a baptismal font, it was definitely large enough to suggest such a use, and Joseph Smith’s specifications for a baptismal font modeled after the Solomonic laver for the Nauvoo temple show that he understood it in this connection. 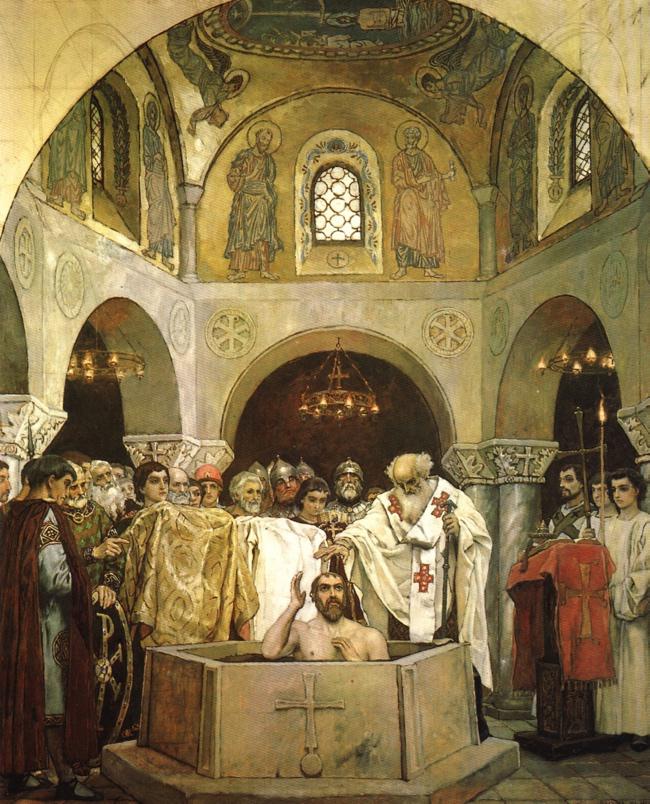 Viktor Vasnetsov (1848–1926), The Baptism of Saint Prince Vladimir, 1890. “Attendants hold Vladimir’s golden royal robes, which he has removed, and the simple white baptismal robe, which he will put on.”[34]

It is evident that two distinct sorts of water ordinances—namely baptism by immersion (“preparatory to the reception of the Holy Ghost”[35]) “in order to enter the kingdom of God”[36] and washing (“preparatory to the anointing with holy oil … in the man[ner] [of] Moses and Aaron”[37]) as part of priestly or kingly initiation—became confused in the first centuries after Christ, making it difficult to be sure which one is meant when Christian scripture or tradition mentions the use of water in religious ritual.[38] Indeed, as religious practices evolved, rituals resembling the washing, anointing, and clothing of Israelite priests[39] were sometimes performed as part of “baptism.” 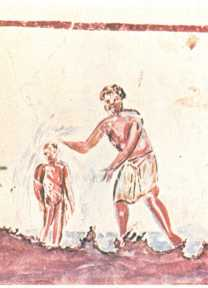 Some baptismal traditions describe how the candidate was “stripped of the garments inherited from Adam and vested with the token of those garments he or she shall enjoy at the resurrection.”[41] In other traditions, the baptismal candidates stood barefoot on animal skins while they prayed, symbolizing the taking off of the garments of skin they had inherited from Adam[42] as well as figuratively enacting the putting of the serpent, the representative of death and sin, under one’s heel. Thus the serpent, his head crushed by the heel of the penitent relying on the mercies of Christ’s atonement, was by a single act renounced, defeated, and banished.

This Essay has provided a small sampling of the antiquity of water symbolism in rituals of rebirth. The Book of Moses and the teachings of the temple are clear that such rites go back to Adam and Eve.

Perhaps it is appropriate that significant glimpses of baptism in earliest antiquity come to us through Moses [mōšeh], whose Egyptian name signifies “[the god is] begotten” and whose name was understood by Hebrew-speaking Israelites as “drawer” or “puller.” The biblical text explains Moses’ name in terms of his being “pulled [mĕšîtihû, ‘I drew him’] … from the water[s]” of the river by the daughter of Pharaoh and thereby becoming “her son” (Exodus 2:10), a rebirth image that recalls birth and being drawn out of amniotic fluid, like the image of baptism. But the vowelling of his name as a Hebrew pseudo-active participle—“drawer” or “puller”[43] from the verb mšh/mšy—anticipates Moses’ future role as the one who would “draw” or “pull” Israel through the waters of the Re[e]d Sea (cf. especially Moses 1:25). Or, as Paul put it, “[all the Israelites were] baptized unto Moses in the cloud and in the sea” (1 Corinthians 10:2).[44]

This article is adapted and expanded from Bradshaw, Jeffrey M., and Matthew L. Bowen. “‘By the Blood Ye Are Sanctified’: The Symbolic, Salvific, Interrelated, Additive, Retrospective, and Anticipatory Nature of the Ordinances of Spiritual Rebirth in John 3 and Moses 6.” In Sacred Time, Sacred Space, and Sacred Meaning (Proceedings of the Third Interpreter Foundation Matthew B. Brown Memorial Conference, 5 November 2016), edited by Stephen D. Ricks and Jeffrey M. Bradshaw. The Temple on Mount Zion 4, 43–237. Orem and Salt Lake City, UT: The Interpreter Foundation and Eborn Books, 2020, pp. 61–66.

Bowen, Matthew L. "‘Most desirable above all things’: Mary and Mormon." In Name as Key-Word: Collected Essays on Onomastic Wordplay and the Temple in Mormon Scripture, edited by Matthew L. Bowen, 17-47. Orem and Salt Lake City, UT: The Interpreter Foundation and Eborn Books, 2018.

Hundley, Michael B. Gods in Dwellings: Temples and the Divine Presence in the Ancient Near East. Atlanta, GA: Society of Biblical Literature, 2013.

Larsen, David J. "Ascending into the hill of the Lord: What the Psalms can tell us about the rituals of the First Temple." In Ancient Temple Worship: Proceedings of the Expound Symposium, 14 May 2011, edited by Matthew B. Brown, Jeffrey M. Bradshaw, Stephen D. Ricks and John S. Thompson. Temple on Mount Zion 1, 171-88. Orem and Salt Lake City, UT: The Interpreter Foundation and Eborn Books, 2014.

Pinkus, Assaf. "The impact of the Black Death on the sculptural programs of the pilgrimage church St. Theobald in Thann: New perception of the Genesis Story." Assaph: Studies in Art History 6 (2001): 161-76.

[1] From A. Pinkus, Impact, p. 5. Permission previously granted by the author.

[14] Image reproduced in J. V. Canby, Ur-Nammu, Plate 14a. http://sumerianshakespeare.com/25401/ (accessed January 31, 2017). No known copyright restrictions. This work may be in the public domain in the United States.

[19] For a thoroughgoing treatment of Egyptian concepts of ritual purification and the connection of purification rites to temples, including rites involving water, see J. Gee, Requirements.

[29] J. P. Allen, Middle Egyptian: An Introduction to the Language and Culture of Hieroglyphs, p. 58.

[34] Sketch for the fresco of St. Vladimir’s Cathedral, Kiev, Ukraine. https://upload.wikimedia.org/wikipedia/commons/8/8b/Vasnetsov_Bapt_Vladimir.jpg (accessed September 11, 2016). No known copyright restrictions. This work may be in the public domain in the United States.

[38] E.g., Hebrews 6:2. See also John A. Tvedtnes, who wrote: “In early Christianity, following the apostasy, temple initiation eventually merged with the baptismal initiation, which included both washing and anointing with oil, along with donning of white clothing and sometimes the reception of a new name” (J. A. Tvedtnes, Rituals). See also R. T. Wilkins, Influence of Israelite Temple Rites., pp. 91–96.

[40] https://upload.wikimedia.org/wikipedia/commons/0/0a/Baptism_-_Saint_Calixte.jpg (accessed September 11, 2016). No known copyright restrictions. This work may be in the public domain in the United States.