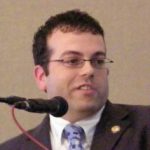 About Ugo A. Perego

Dr. Ugo A. Perego has a PhD in Genetics and Biomolecular Studies from the University of Pavia in Italy, where he studied under the mentorship of Professor Antonio Torroni, who was part of the team of scientists to first identify genetic diversity among Native American populations in the early 1990s. Dr. Perego was a senior researcher for the Sorenson Molecular Genealogy Foundation for 12 years, where he contributed to the building of one of the world’s largest repositories of combined genealogical and genetic data. He has published and presented extensively on DNA and its application in populations, forensic, ancestry, historical, and genealogical studies. He currently resides in Italy, where he is the director of the Rome Institute Campus and a visiting scientist at the University of Pavia.

Is Decrypting the Genetic Legacy of America’s Indigenous Populations Key to the Historicity of the Book of Mormon?

The Changing Forms of the Latter-day Saint Sacrament

Ugo A. Perego – “All Abraham’s Children: A Genetic Perspective”

Is Decrypting the Genetic Legacy of America’s Indigenous Populations Key to the Historicity of the Book of Mormon?