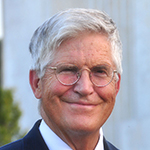 Richard Dilworth Rust is an Emeritus Professor of English at the University of North Carolina at Chapel Hill. He was a General Editor of the thirty-volume Complete Works of Washington Irving and has published about the Revolutionary War and the Civil War and about authors such as James Fenimore Cooper, Nathaniel Hawthorne, Herman Melville, Mark Twain, and Henry James. In respect to Mormon studies, he is the author of Feasting on the Word: The Literary Testimony of the Book of Mormon and has published in the New Era, Ensign, Encyclopedia of Mormonism, BYU Studies, Book of Mormon Reference Companion, and Journal of the Book of Mormon and Other Restoration Scripture.

“How long can rolling waters remain impure?”: Literary Aspects of the Doctrine and Covenants