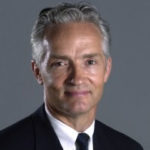 Ralph C. Hancock (PhD Harvard) is Professor of Political Science at Brigham Young University, where he teaches the tradition of political philosophy as well as contemporary political theory. He has taught three times as Visiting Professor at the University of Rennes, France, and was a Visiting Scholar at Liberty Fund in Indianapolis. He is the author of Calvin and the Foundations of Modern Politics (Saint Augustine’s Press, 2011; Cornell University Press, 1989) as well as The Responsibility of Reason: Theory and Practice in a Liberal-Democratic Age (Rowman & Littlefield, 2011). He is also the editor of America, the West, and Liberal Education (Rowman & Littlefield, 1999) and, with Gary Lambert, of The Legacy of the French Revolution (Rowman & Littlefield, 1996) and translator of numerous books and articles from the French, including Pierre Manent’s Natural Law and Human Rights (Notre Dame University Press, 2020). He has published many academic articles as well as articles in the press and online on the intersection of faith, reason and politics. Professor Hancock is a Consulting Editor of Perspectives on Political Science and a member of the editorial board of Square Two, an online journal of “Faithful Scholarship by Members of the Restored Church of Jesus Christ of Latter Saints on Contemporary Issues.” He is also co-founder of Fathom the Good, which provides a history and humanities curriculum for home schools and independent schools grounded in the Western tradition of political philosophy.

Nephi’s Obsession, Or, How to Talk with Nephi about God

Beyond Agency as Idolatry

Failing the Progressive Quiz: a Response to Dehlin

To Really Read the Book of Mormon