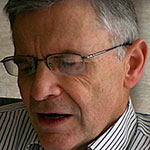 John S. Robertson is a Professor of Linguistics Emeritus, Brigham Young University. He received a BA in Political Science, an MA in Linguistics, both from BYU, and a PhD from Harvard University, Department of Linguistics. He has over sixty publications which include several books and many articles that treat the reconstruction of proto-Mayan, language change, and the grammar and sound system of the Mayan Hieroglyphs. He is also an inveterate student of the polymath C.S. Peirce, founder of American Pragmatics and Semiotics. His missionary service includes France Paris (1962-1965), England London, Family History (2011-2012), Pathway (2015 to 2017), Cody Historic Mural and Museum (May-September 2017), the latter three with his wife Barbara. Other Church service includes bishop, bishop’s counselor, branch president (Guatemala), high council, Young Mens, and Primary. He is happily married to Barbara Clyde Robertson, with twenty-two grandchildren.