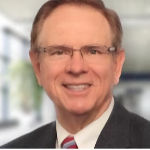 Gerrit Mark Steenblik received his B.A. from the Honors Program at the University of Utah where he was the President of the Latter-day Saint Student Association. Later he was called to the Melchizedek Priesthood MIA (Single Adults) General Board. He obtained his law degree at BYU and was a member of its Law Review before commencing his legal career in Phoenix, Arizona. He served as President of the Phoenix Sister Cities Commission and, in 2001, was called as Mission President of the Abidjan, Ivory Coast Mission, which included the French-speaking countries of Ivory Coast, Togo, Benin, Cameroun, and the Central African Republic. France appointed him to be its Honorary Consul in Arizona, a position he held for 19 years and for which he was decorated as Chevalier de l’Ordre national du Mérite. For his years of service to young men, the Boy Scouts of America awarded him the Silver Beaver. In 2015, when the Arizona Ecumenical Council became an interreligious organization (Arizona Faith Network), Gerrit was called to represent the Church on its Board of Directors. He continues in that role, and with his wife, Judy, serves on the Church’s Phoenix Metro Communications Council. They have three children, five grandchildren, and are actively engaged in interfaith outreach, especially to the African American Christian clergy and community leaders.

Demythicizing the Lamanites’ “Skin of Blackness”