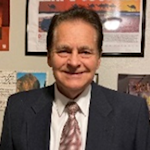 George D. Potter graduated with high honors from U.C. San Diego and, two years later, earned a master’s degree from U.C. Berkeley and became a certified public accountant. He lived in Arabia for 27 years and, during that time, produced many films and books on his Book of Mormon and biblical discoveries. His articles on the “Valley of Lemuel” (1999) and “Lehi’s Trail” (2007) were published in the Journal of Book of Mormon Studies. His books include Lehi in the Wilderness (2003), Nephi in the Promised Land (2009), The Voyages of the Book of Mormon (2011), and Discovering the Amazing Jaredites (2021). He is the editor of a monthly newsletter on Book of Mormon research. Highlights of his research are presented on his website, http://www.nephiproject.com.