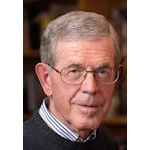 Bruce Hafen grew up in St. George, Utah. After serving a mission to Germany, he met Marie Kartchner from Bountiful, Utah at BYU. They were married in 1964. Elder Hafen received a bachelor’s degree from BYU and a Juris Doctor degree from the University of Utah. After practicing law in Salt Lake City, he went to BYU in 1971 as a member of the original faculty of BYU’s new Law School. He taught and published research on family law and constitutional law. He served as the President of BYU-Idaho from 1978 to 1985. Then he was Dean of the BYU Law School and later served as the Provost—the second in command–at BYU. He was called as a full-time General Authority in 1996, serving in area presidencies in Australia, North America, and Europe. He also served at Church headquarters as an adviser to the Priesthood Department, the general auxiliary presidencies, Church History, and the Temple Department. He became an Emeritus General Authority in 2010 then served as president of the St. George Temple. More recently he served as Chairman of the Utah LDS Corrections Committee, overseeing the Church branches in Utah’s state prisons and county jails. He is the author of several books on gospel topics, including the biography of Elder Neal A. Maxwell, and books on marriage, the temple, and the Atonement—including The Broken Heart and Covenant Hearts.

Adam, Eve, the Book of Moses, and the Temple: The Story of Receiving Christ’s Atonement