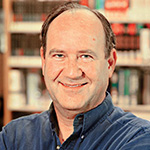 Alan Goff is a professor in the department of Liberal Arts and Sciences at DeVry University, Phoenix, where he has taught humanities and history classes for 20 years. He received his baccalaureate degree from BYU with a double major in political philosophy and English. He also received master’s degrees in those two fields from BYU. In 1993 he received a Doctor of Arts degree in Humanistic Studies from the University at Albany where he was able to combine the study of philosophy and literary theory in the interdisciplinary program. His main publishing focus since 1989 has been on Mormon scripture and history, staking out that overlapping territory between literary criticism and history called narrative theory. Part of the necessary preparation for publishing in this area is to study the scholarly literature from philosophy, historiography, philosophy of history, biblical criticism, and literary theory to apply approaches from these disciplines to the writing of Mormon history and the Book of Mormon. He is also currently the president of the learned society Mormon Scholars in the Humanities.

The Inevitability of Epistemology in Historiography: Theory, History, and Zombie Mormon History