The Flight of the Prisoners, by James Tissot and others 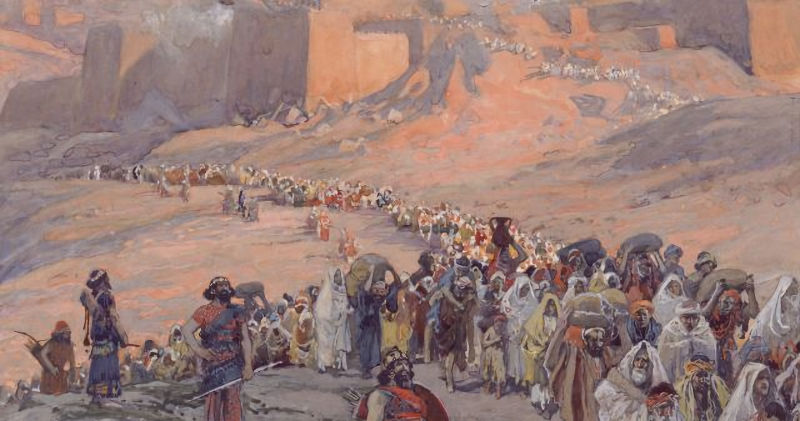 When Josiah heard the words from the book of the law, he responded in faith. How can you respond in faith to what you read in 2 Kings 17–25?

2 Kings 17: Hoshea reigns in Israel and is subject to the Assyrians—The Israelites forsake the Lord, worship idols, serve Baal, and reject all that the Lord has given them—The ten tribes are carried away captive by the kings of Assyria—The land of Israel (Samaria) is repopulated by other people—Many forms of false worship are found among the Samaritans.

2 Kings 18: Hezekiah reigns in righteousness in Judah—He destroys idolatry and breaks the brazen serpent made by Moses because the children of Israel burn incense to it—Sennacherib, king of Assyria, invades Judah—In a blasphemous speech, Rabshakeh asks Jerusalem to surrender to the Assyrians.

2 Kings 20: Hezekiah is told he will die and pleads with the Lord; his life is lengthened fifteen years—The shadow goes back ten degrees on the sundial of Ahaz—Isaiah prophesies the Babylonian captivity of Judah.

2 Kings 21: Manasseh turns Judah to idolatry, even sacrificing a son to a heathen god—Prophets foretell the destruction of Judah and Jerusalem—Wickedness continues under Amon.

2 Kings 22: Josiah reigns in righteousness in Judah—Hilkiah repairs the temple and finds the book of the law—Josiah sorrows because of the wickedness of his fathers—Huldah prophesies wrath upon the people but blessings upon Josiah.

2 Kings 23: Josiah reads the book of the covenant to the people—They covenant to keep the commandments—Josiah overturns the worship of false gods, removes the sodomites, and puts down idolatry—Idolatrous priests are slain—Judah holds a solemn Passover—Egypt subjects the land of Judah.

2 Kings 24: Jerusalem is besieged and taken by Nebuchadnezzar—Many of the people of Judah are carried captive into Babylon—Zedekiah becomes king in Jerusalem—He rebels against Babylon.

2 Kings 25: Nebuchadnezzar again besieges Jerusalem—Zedekiah is captured, Jerusalem and the temple are destroyed, and most of the people of Judah are carried into Babylon—Gedaliah, left to govern the remnant, is slain—The remnant flee to Egypt—Jehoiachin is shown favor in Babylon.