Illustration of Joseph of Egypt, by Robert T. Barrett 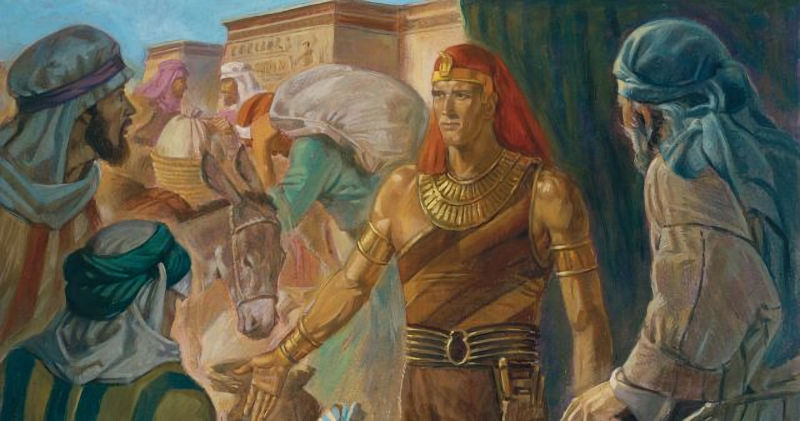 Reading the scriptures invites the Spirit. Listen for His promptings as you read, even if they don’t seem directly related to what you’re reading.

Genesis 42: Jacob sends his sons to buy grain in Egypt—They bow before Joseph—He makes harsh accusations against them, imprisons Simeon, and sends them back for Benjamin.

Genesis 43: Jacob is persuaded to send Benjamin to Egypt—Joseph’s brothers show respect to him—They all eat and drink together.

Genesis 44: Joseph arranges to stop the return of his brothers to Canaan—Judah offers himself in place of Benjamin for their father’s sake.

Genesis 45: Joseph makes himself known to his brothers—They rejoice together—Pharaoh invites Jacob and his family to dwell in Egypt and eat the fat of the land.

Genesis 46: The Lord sends Jacob and his family of seventy souls to Egypt—The descendants of Jacob are named—Joseph meets Jacob.

Genesis 47: The Israelites settle in Goshen—Jacob blesses Pharaoh—Joseph sells grain to the Egyptians—Pharaoh receives the Egyptians’ cattle and lands—Jacob desires to be buried with his fathers in Canaan.

Genesis 48: Jacob tells of the appearance of God to him in Luz—He adopts Ephraim and Manasseh as his own children—Jacob blesses Joseph—He puts Ephraim before Manasseh—The seed of Ephraim will become a multitude of nations—The children of Israel will come again into the land of their fathers.

Genesis 49: Jacob blesses his sons and their seed—Reuben, Simeon, and Levi are chastened—Judah will rule until Shiloh (Christ) comes—Joseph is a fruitful bough by a well—His branches (the Nephites and Lamanites) will run over the wall—The Shepherd and Stone of Israel (Christ) will bless Joseph temporally and spiritually—Jacob chooses to be buried with his fathers in Canaan—He yields up the ghost and is gathered to his people.

Genesis 50: Jacob’s body is embalmed—Joseph buries him in Canaan—Joseph comforts his brothers—The children of Israel multiply—Joseph promises that God will bring Israel out of Egypt into Canaan—Joseph dies in Egypt and is embalmed.