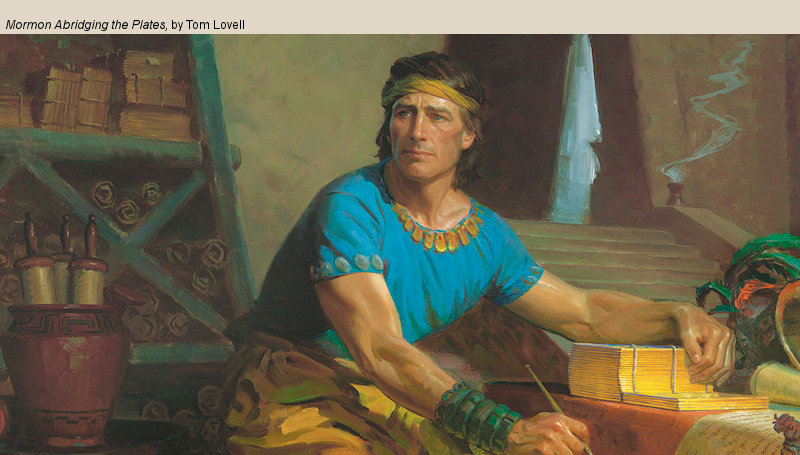 As you read Mormon 1–6, ponder what you learn from Mormon’s example. Record what you feel inspired to do.

Mormon 2: Mormon leads the Nephite armies—Blood and carnage sweep the land—The Nephites lament and mourn with the sorrowing of the damned—Their day of grace is passed—Mormon obtains the plates of Nephi—Wars continue. About A.D. 327–50.

Mormon 3: Mormon cries repentance unto the Nephites—They gain a great victory and glory in their own strength—Mormon refuses to lead them, and his prayers for them are without faith—The Book of Mormon invites the twelve tribes of Israel to believe the gospel. About A.D. 360–62.

Mormon 4: War and carnage continue—The wicked punish the wicked—Greater wickedness prevails than ever before in all Israel—Women and children are sacrificed to idols—The Lamanites begin to sweep the Nephites before them. About A.D. 363–75.

Mormon 5: Mormon again leads the Nephite armies in battles of blood and carnage—The Book of Mormon will come forth to convince all Israel that Jesus is the Christ—Because of their unbelief, the Lamanites will be scattered, and the Spirit will cease to strive with them—They will receive the gospel from the Gentiles in the latter days. About A.D. 375–84.

Mormon 6: The Nephites gather to the land of Cumorah for the final battles—Mormon hides the sacred records in the hill Cumorah—The Lamanites are victorious, and the Nephite nation is destroyed—Hundreds of thousands are slain with the sword. About A.D. 385.