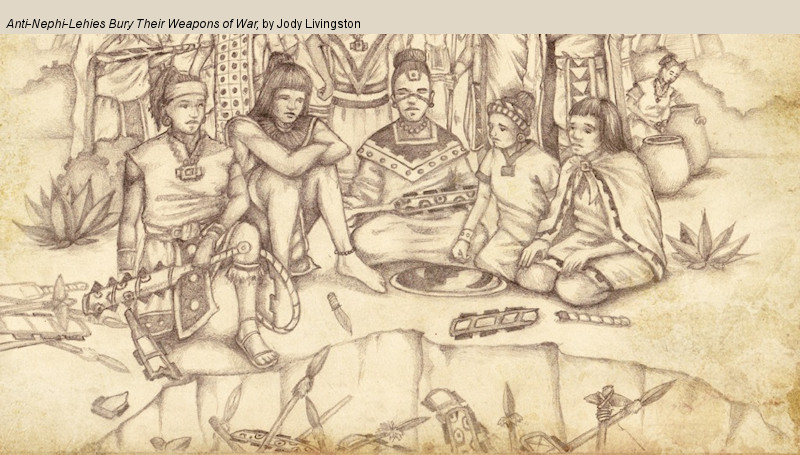 As you study Alma 23–29, what messages do you find for yourself and your family? What can you share in your Church classes?

Alma 23: Religious freedom is proclaimed—The Lamanites in seven lands and cities are converted—They call themselves Anti-Nephi-Lehies and are freed from the curse—The Amalekites and the Amulonites reject the truth. About 90–77 B.C.

Alma 24: The Lamanites come against the people of God—The Anti-Nephi-Lehies rejoice in Christ and are visited by angels—They choose to suffer death rather than to defend themselves—More Lamanites are converted. About 90–77 B.C.

Alma 25: Lamanite aggressions spread—The seed of the priests of Noah perish as Abinadi prophesied—Many Lamanites are converted and join the people of Anti-Nephi-Lehi—They believe in Christ and keep the law of Moses. About 90–77 B.C.

Alma 26: Ammon glories in the Lord—The faithful are strengthened by the Lord and are given knowledge—By faith men may bring thousands of souls unto repentance—God has all power and comprehends all things. About 90–77 B.C.

Alma 28: The Lamanites are defeated in a tremendous battle—Tens of thousands are slain—The wicked are consigned to a state of endless woe; the righteous attain a never-ending happiness. About 77–76 B.C.

Alma 29: Alma desires to cry repentance with angelic zeal—The Lord grants teachers for all nations—Alma glories in the Lord’s work and in the success of Ammon and his brethren. About 76 B.C.