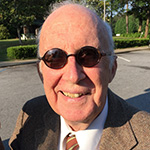 Timothy Guymon graduated from West Virginia University with a communications degree and an MA in foreign languages. He had a broadcasting career in the US Army and in commercial radio, worked as an editor/photographer for various magazines, taught Spanish at West Virginia University, and English at Utah Valley University and the University of Phoenix. He was a missionary in Uruguay 1966-68. He now lives in Florida.