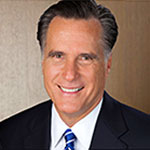 Mitt Romney graduated from Brigham Young University in English, earned degrees from Harvard Business School and Harvard Law School, served as chief executive officer of Bain & Company, and then co-founded and led Bain Capital. After leading the 2002 Winter Olympic Games, he was elected Governor of the Commonwealth of Massachusetts. In 2012, he was nominated by the Republican Party for the presidency of the United States of America.